Larder beetles are of significant interest for many residents this summer

Larder beetles are dropping by homes for a meal and possibly conversation.

Insect populations are like waves on the ocean. Sometimes they are up and sometimes, they are down. Or if you think about it a more contemporary manner, everyone gets their fifteen minutes of fame. This seems to be The Year of the Larder Beetle or Dermestes lardarius. This small dermestid beetle belongs to nature’s cleanup crew. They are delighted to be able to feed on dead insects or other high protein foods. This includes meat, cheese, dry dog and cat food, plus other items like fur, feathers and possibly leather and museum specimens.

Michigan State University Extension and Master Gardener hotlines have received many calls this late spring and early summer from people about what appears to be two different insects wandering in their homes. What the callers don’t realize is that the adults look different than the larvae or juveniles. The “two” insects are really just one found in different life stages. The larder beetle comes by its name because of where it was found in the bad old days before refrigeration. They were found in rooms used to store food called a larder. They were pests when people cured meats or had unrefrigerated cheeses aging.

The adult larder beetle is between a third and a quarter inch in length with an oval body shape. This six-legged insect is black in color and on its back, at the top of the wing covers, is a dark tan-to-cream band that runs from side to side. The band has six black spots, three spots on each wing cover. 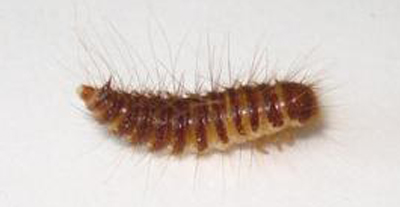 The larva or the juvenile eventually will grow to about a half inch before pupating into an adult. It’s difficult for most people to envision a child that is bigger than the parent. But that’s a bug’s world. The larva is segmented and longer than it is wide. It has many hairs covering its reddish to dark brown body so it looks bristly or hairy. On the rear end, there are two spines that curve back and downwards.

When the larvae pupate, they will create a shallow hole by chewing a perfectly round depression about a half inch deep into locations like soft or damp wood, foam insulation or the page side of a book.

Many of the larder beetles that are seen in homes are drawn to dead insects in the wall voids like boxelder bugs and cluster flies. We have had two cold winters in Michigan and more of the insects that overwinter as adults in between the outside wall and the inside wall have died. Being the helpful, little cleanup crew that they are, the larder beetles volunteered to take out the trash by eating it. Adults and larvae exit under baseboards and stroll about and this is what attracts unwanted attention.

Choices are simple for larder beetle removal. If there is a food source like dry pet food or an insect collection or cheeses curing on a shelf, remove or protect these. Adults and larvae can be vacuumed up. Or if the problem is more severe than usual, a crack and crevice pesticide approved for indoor use can be used. This can be applied along the bottom of the baseboard on the exterior walls where the dead insects and food source is located. Read the label carefully.