At this time of year, the focus of powdery mildew management should be on reducing inoculum production for next year, which typically peaks in mid-September. Eradicant sprays are best applied to visible colonies in early September. 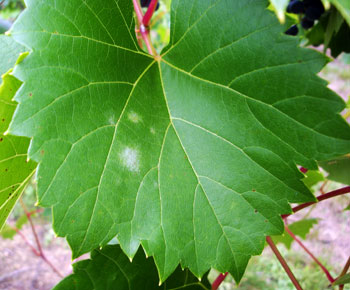 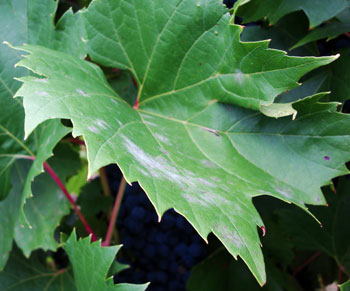 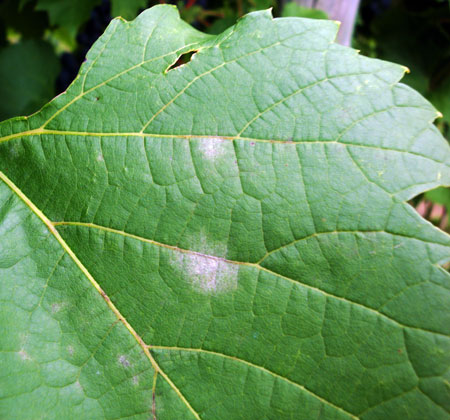 The most common approach to grapevine powdery mildew management is to apply preventative fungicide sprays. A more sustainable and cost-effective management approach is to aggressively protect the fruit during its most susceptible period (from bloom until five to six weeks after bloom) and then take a more relaxed approach to protecting the foliage in order to keep the leaves functional during fruit ripening. Frequent scouting will be needed as well as eradicative sprays once powdery mildew colonies start to appear. 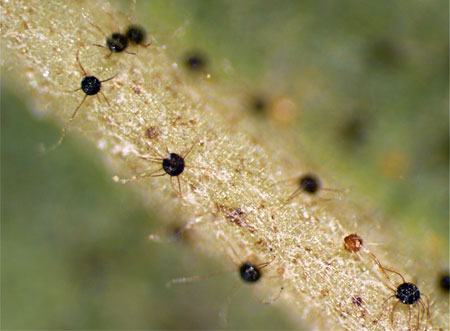 While we have many effective fungicides for preventative and curative control of powdery mildew in grapes, not many fungicides can eradicate existing colonies. In fact, spraying systemic fungicides on raging infections is not very effective and can encourage fungicide resistance development. At most you can expect to suppress sporulation while you keep new infections from taking place on healthy tissues. Small plot efficacy trials in grapes have shown that JMS Stylet Oil, Sulforix and Kaligreen have good eradicative properties and can reduce the number of visible colonies (see graphs). To reduce the number of cleistothecia, Sulforix, Elite and Kaligreen appeared most effective (Elite did not eliminate existing infections, but prevented new infections). Do not apply Sulforix on sulfur-sensitive varieties or close to harvest, as sulfide residues may interfere with the fermentation process. More than two applications of Stylet Oil are thought to suppress brix accumulation but we are evaluating this premise in Michigan in 2012. 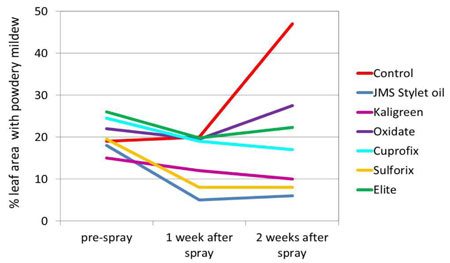 Effect of a single post-infection spray on cleistothecium formation 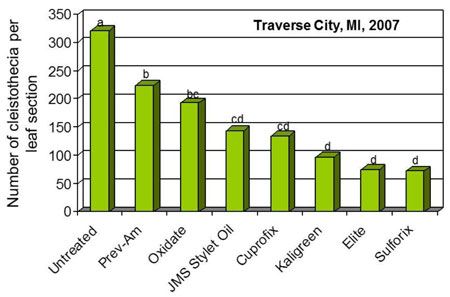 A few things to remember when applying eradicative sprays.