Time invested now can identify problems in your fields and lead to good management decisions later.

Walking fields late in the season can be a workout, but the effort can give you a glimpse into what management steps should  be taken at harvest and as you plan for the 2013 crop. When walking corn and soybean fields, look for insect damage, weed escapes and signs of diseases; they will all leave their mark on a field.

What to look for in Michigan soybean fields

Sudden death syndrome is showing up in fields this time of year. Producers may first notice early yellowing of leaves. At a closer look, the yellowing of leaf tissue is between major veins in the leaves and it progresses to brown tissue, and eventually the leaves drop, but not the petioles. 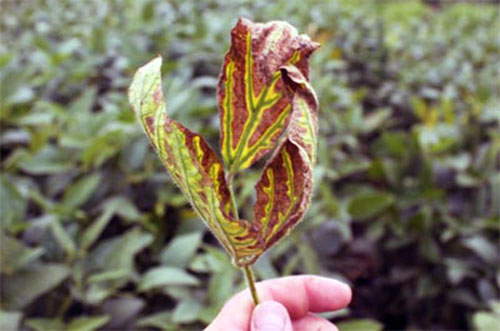 Soybean cyst nematodes will also show up in the fall, causing leaves on plants to prematurely yellow and drop. For positive identification, soil samples must be submitted to identify the number and type of nematodes present. Rotation and seed selection are important factors in managing this pest once it has been identified.

Spider mites have been a big problem for soybean producers this summer, but should be gone at this point. If you see symptoms in a field that you expect are spider mites, first check to see if spider mites are present. If no live ones are found, look for symptoms of sudden death syndrome or brown stem rot.

What to look for in Michigan corn fields

The most immediate concern when scouting late season corn is to look at grain quality. Ear rot or mold growing on kernels may produce mycotoxins. If toxic mold is present, harvest equipment adjustments, as well as drying and storage management, may need to be adjusted.

Aspergillus is prevalent in hot, dry conditions. It is characterized by olive-green mold on the ear. It does produce mycotoxins. 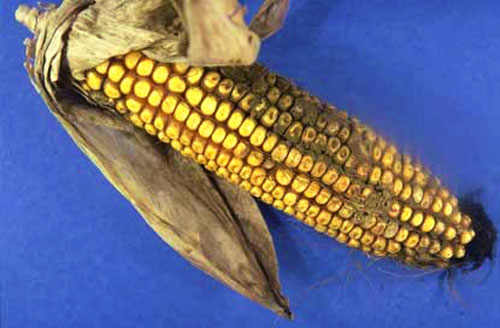 Fusarium is associated with insect damage or environmental stress, common in dry, warm weather. The mold is scattered around the ear on individual or small groups of kernels. Color ranges from white to light pink to reddish-brown. It does produce mycotoxins. 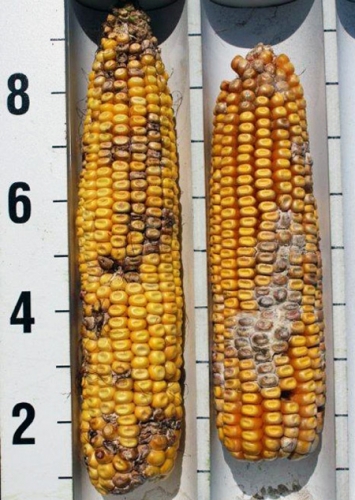 Gibberella has been associated with bird or insect damage at the ear tip. It is dark pink and usually starts at the ear tip and moves down the ear. It does produce mycotoxins. 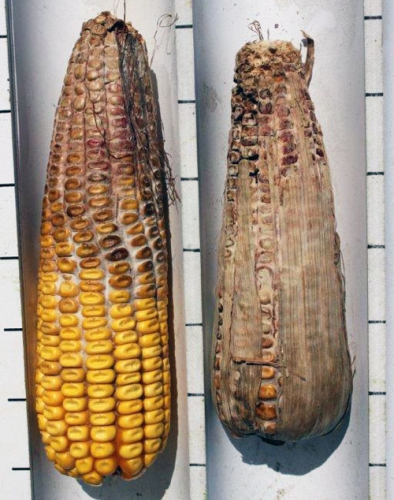 Diplodia begins at the base of the ear and moves up. This is a white mold and can be distinguished based on small black dots (fungal fruiting bodies) that are formed on infected kernels. It does not produce mycotoxins. 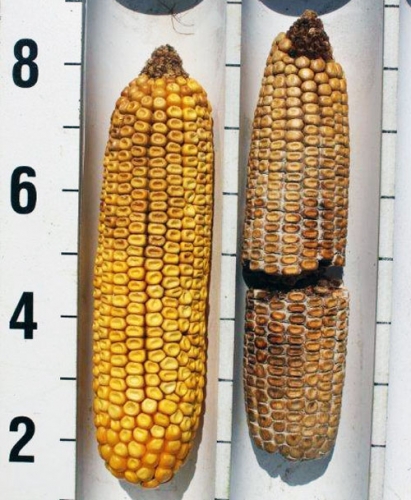 Look for weed escapes in all fields

Identify the cause for weed escapes in the fall. Weeds of particular concern are those that have developed resistance to glyphosate or ALS.

Palmer amaranth is a new weed to Michigan that has now been identified in five Michigan Counties: St. Joseph, Kalamazoo, Shiawassee, Clinton and Barry. Resistant to glyphosate and ALS, Palmer amaranth has been difficult to control once established in fields. Fall scouting will allow producers to remove the weed from the field; hopefully before the over 400,000 seeds per plant are released. Fields to watch are those that have received manure in the last couple of years, especially if cotton seed has been a part of the livestock diet.

Suspected resistance in other Michigan weeds that may be resistant to herbicides are horse weed or marestail, common lambsquarter, common ragweed and giant ragweed. When these weeds are found in fields in the fall because they were not controlled by the current herbicide program, it is a good time to determine the cause. In an effort to help producers positively identify weeds with herbicide resistance, the Michigan Soybean Checkoff has a free testing program. Visit the Free Soybean Diagnostic Programs website for more information on how to submit samples.

Late-season scouting guides for corn and soybeans can be a good tool to help identify pests. These guides have colored pictures and short descriptions of the pest as well as a place to document what is found. Guides are available at Iowa State University Extension online store.

If you are not sure you can identify the type of mold, insect, disease or weed, just submit a sample to MSU Diagnostic Services. It is an easy process:

Each year brings a new set of challenges with pests. Investing time in late-season scouting will help identify problems and set a positive course for the next growing season.