Michigan potatoes infected with late blight have been found. Tomato growers should also be on alert for this disease.

Late blight was found in potatoes near Bronson, Michigan, on July 5, 2016. Late blight is a disease that most commonly affects potatoes, but can affect tomatoes when the weather is cool, rainy and humid. The pathogen, Phytophthora infestans, is well known to potato and tomato growers, especially in the northeast U.S. where growers frequently suffer losses from this disease.

Late blight symptoms include blighting on all aboveground parts of the tomato plant. Blighting on the leaves often appears dark and oily with production of spores occurring on the undersides of the leaves (Photo 1). The spores can appear purplish when the weather is wet and humid. Blackened lesions on the stems also occur and serve as a good indication of the late blight disease (Photo 2). Late blight affects green and ripe tomato fruit. In Michigan, there is no other fruit rot that affects green fruit. The blighting on fruit appears as dark, greasy areas that increase rapidly to affect the entire fruit (Photo 3). 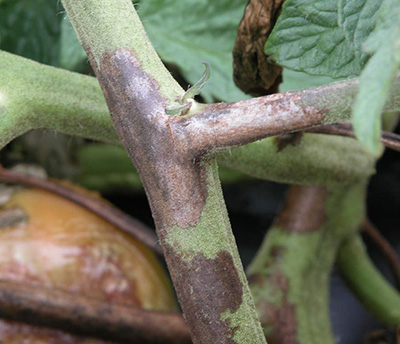 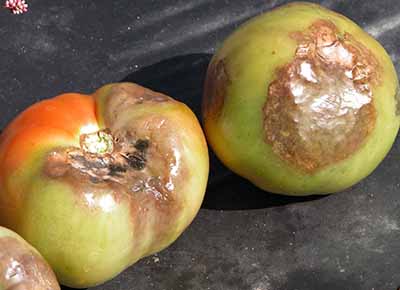 Between cropping seasons, the late blight pathogen survives on volunteer and abandoned potatoes or tomatoes in cull piles. The pathogen is wind-dispersed and sporangia can spread from infected plants and cull piles. Control measures include eliminating all potato/tomato cull piles and destroying volunteer potato plants that grow from overwintered tubers that are diseased. Infected potato plants established from diseased seed potatoes are another source of late blight early in the season. Most tomato cultivars are susceptible to late blight. ‘Mountain Magic’ is a late blight-resistant variety developed at North Carolina State University, though supplies may be limited.

For the last 15 years, the Hausbeck lab at Michigan State University has conducted late blight trials on tomatoes. In 2012, a fungicide study was conducted at the MSU Plant Pathology Research Farm near East Lansing, Michigan. Five registered fungicides were evaluated (Table 1), alone or as part of a rotation program, for their efficacy in managing late blight on ‘Mountain Pride’ tomatoes. Treatments were applied preventively and repeated every five to seven days for a total of nine sprays.

*The Fungicide Resistance Action Committee (FRAC) assigns a code to fungicide products based on their active ingredients with the goal of providing fungicide resistance management guidelines to growers to prolong the effectiveness of “at risk” fungicides and to limit crop losses should resistance occur.

The untreated control plants became heavily infected (72 percent of the foliage was blighted) (Figure 1), which resulted in defoliation of up to 24 percent of the leaves (data not shown). More than 65 percent of the fruit became infected and rotted as a result of late blight. All of the treatments effectively limited late blight infection to approximately 6 percent diseased leaves and reduced the amount of rotted fruit compared to the untreated control. The applications of Zampro were just as effective as Cabrio in limiting late blight on tomatoes. 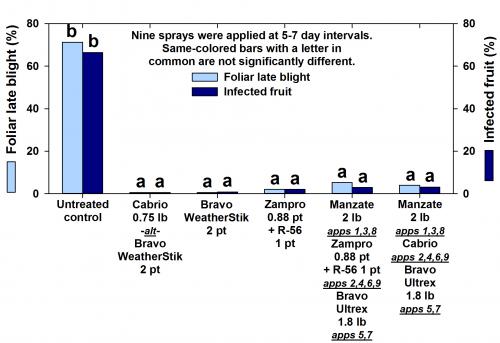 Many of the fungicides used routinely to manage early blight and anthracnose can help protect against the late blight pathogen. Until late blight has been detected in surrounding areas, fungicide sprays that are specific for late blight usually are not recommended. See MSU Extension bulletin E312, “Insect, Disease and Nematode Control for Commercial Vegetables” for more information. Other late blight products in addition to those included in the graph that could be effective in a rotation program include Revus, Reason 500 SC, Ranman, Curzate, Gavel, Zing!, Presidio and Forum (see “Insect, Disease and Nematode Control for Commercial Vegetables”). Testing of the late blight pathogen for sensitivity to the Ridomil fungicide is underway by Noah Rosenzweig et al. from MSU.