Downy mildew has been active since mid- to late June in southwest Michigan and mid-July in northwest Michigan due to abundant rainfall and conducive temperatures, although more recent warm, dry weather in some locations may have slowed it down. Rainfall continues to be quite variable across Michigan, which makes disease occurrence spottier and precludes blanket recommendations for disease control. However, warm humid nights and dew formation are conducive to downy mildew development, as it promotes abundant sporulation in lesions. Dew formation also promotes downy mildew development on Niagara and Concord vines. Their hairy lower leaf surfaces are difficult to wet by rain.

Powdery mildew symptoms were first reported in early to mid-July and may get more prevalent during warm, dry weather forecast for the rest of August, especially since the relative humidity is increasing as noted from increasing dew point temperatures. Powdery mildew late in the season goes into “overwintering inoculum production mode” and cleistothecia (small brown to black specks) have already been seen in powdery mildew colonies.

To prevent cleistothecium production on infected plant tissues, you can apply eradicant fungicides, such as oils or bicarbonate salts. If you do, make sure to use sufficient water to achieve thorough coverage as these materials have to contact the powdery mildew hyphae to be effective. Be careful with oils during periods with high temperatures (85 degrees Fahrenheit and above) as leaf burning can occur. Sterol inhibitor fungicides will also prevent cleistothecium production, but are not recommended for full-blown infections as that may enhance fungicide resistance development.

Black rot symptoms are common on fruit in unsprayed vineyard blocks, and low levels have also been seen even in some sprayed vineyards due to suboptimal spray timing or fungicide wash-off by rain during the susceptible period (early fruit development). Protectant fungicides, such as mancozeb, were more likely to wash off than systemic fungicides, resulting in lower efficacy during the rainy periods. Systemic products like Rally or Elite are the most effective choices for black rot, especially if post-infection activity is needed.

Black rot is always a bit confusing as symptoms that are showing up now are the result of infections that happened three to four weeks ago. ‘Concord’ grape berries are susceptible to black rot infection for about four to five weeks after bloom while some V. vinifera cultivars don’t become fully resistant until eight weeks after bloom. Sometimes small, circular black spots are seen on the berries; these appear to be late black rot infections that were restricted due to the natural resistance in the berries. In other cases, black spots on berries are caused by paraquat (Gramoxone) injury; in those cases, symptoms are more common on low-hanging clusters. 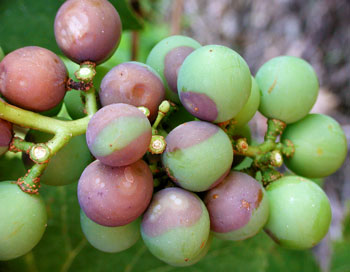 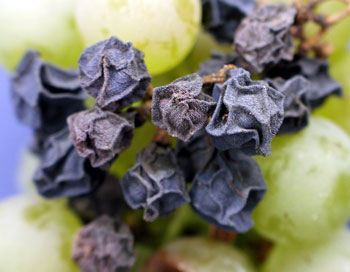 If you have more black rot then you expected this year, Michigan State University Extension advises to focus on doing a better job of controlling the disease next year: the key to controlling black rot is to prevent infections during early fruit development. In juice grapes, a very high level of control is usually achieved with just two sprays applied at the first and second post-bloom timings. For susceptible wine grape cultivars, three post-bloom sprays should be sufficient to nip black rot in the bud.

Phomopsis spots have been present on leaves and canes since May, but new growth is obscuring older infections. During rainy springs and early summers, Phomopsis spore availability usually tapers off before bunch closure, so the risk of cluster infections is nil or very low. However, some in early-ripening wine grapes, such as ‘Vignoles’ and ‘Chardonel’ berries are starting to show Phomopsis infection and secondary berry infections are possible once fungal spores are produced on rotting berries.

Anthracnose symptoms are fairly severe this year in table grapes (e.g., Mars, Marquis) and some wine grapes (e.g., Frontenac, Vidal) due to the rainy weather early in the season. Anthracnose lesions are visible as sunken black lesions on canes, black shot-hole lesions on the leaves and reddish-purple blotches on berries. Anthracnose-infected berries stay firm and may crack open and dry up. 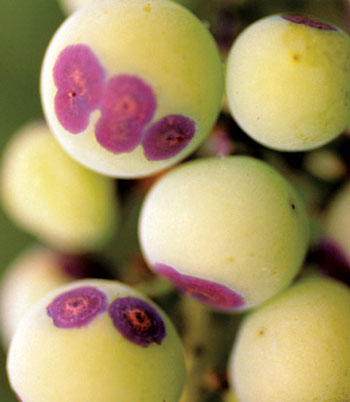 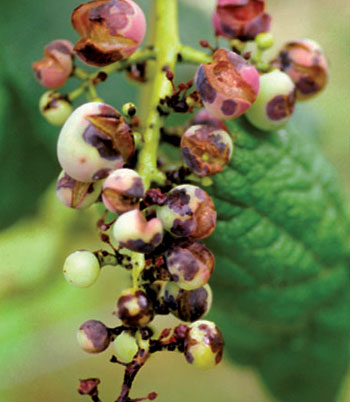 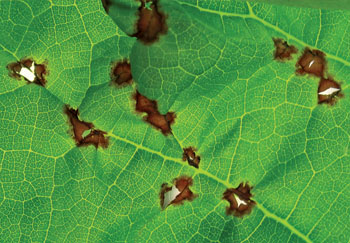 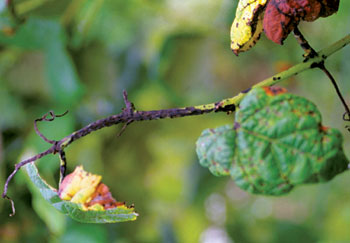 Botrytis has been seen in clusters here and there, but mostly associated with injury to the berries (grape berry moth infestations or berries being squeezed out in compact clusters).

Continue regular scouting for all grape diseases, including virus diseases and fruit rots now that we are coming into veraison. We have seen symptoms of tobacco and tomato ringspot viruses, which are more visible in relatively cool growing seasons. Grapevine leafroll symptoms, such as leaf reddening in red cultivars or yellowing in white cultivars and rolling under of leaf edges, are also becoming more apparent in wine grapes. 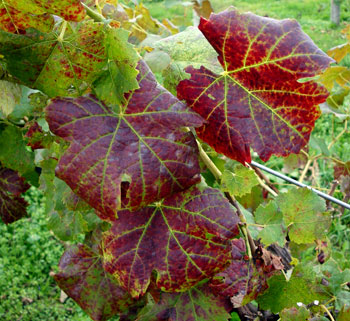 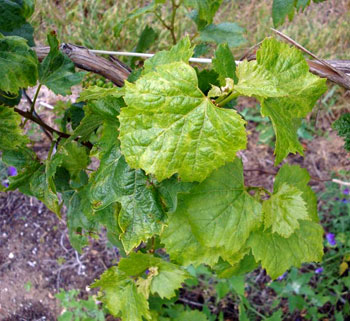 Contact me (Annemiek Schilder) at schilder@msu.edu or Jerri Gillett at gillett@msu.edu or 517-355-7539 if you need a free diagnostic lab test done for suspected virus symptoms.