Lichens: A partnership in nature that survives in diverse environments

One partner provides food and the other shelter and protection from UV light and predators. Together, they can exist in climates ranging from polar to tropical and even aquatic environments.

I frequently get calls from people wondering what the green or grayish-green growths on their tree trunks are, and whether or not they are something that is harming the tree. Generally, what people are seeing are lichens, and no, they are not harming your trees. They are just utilizing the trees to gain better access to sunlight as they make their own food.

For purposes of classification, lichens are grouped with fungi, but they are a symbiotic association of a green alga or cyanobacterium (sometimes both) and one or more fungi. The algae or cyanobacterium partner contains chlorophyll and is able to make carbohydrates through photosynthesis, and is referred to as the photobiont. The fungal partner, or mycobiont, provides shelter and protection from UV light for the photobiont.

Until recently, it was thought that the fungal partners belonged to a group of fungi known as ascomycetes or cup fungi. More recently, researchers discovered an additional symbiotic partner—yeasts belonging to a separate group of fungi, basidiomycetes—that so far have been found in 52 genera of lichens. The role of this partner has not yet been clearly defined, but they seem to produce chemicals that protect lichens from microbes and predation.

Lichens are a major part of the nutrient cycling process. Cyanobacteria are able to fix atmospheric nitrogen. Lichens that grow on rocks produce chemicals that are able to break down rock and allow minerals to be released, allowing for the eventual development of soils.

Lichens form a “plant body” called a thallus, which is usually a layer of fungal tissue (cortex) with a photosynthetic layer of algae or cyanobacterium underneath and threads of fungal tissue (medulla) under that. There may also be root-like fungal structures underneath that the lichen uses to attach itself to whatever it is growing on.

The thallus has several growth forms and variations: crustose—adhering to the growing surface like a crust or stain; foliose—leaf- or strap-like; fruticose—shrub-like and three-dimensional; or squamulose—little flakes growing in colonies or patches. After these organisms come together to form a lichen, they continue to coevolve. Populations of genotypes that work well together increase, while less successful combinations decline.

Some lichens have been around for about 400 million years. After millions of years evolving with their fungal partners, there are specific strains of algae that do very well in lichens, but probably couldn’t survive alone. 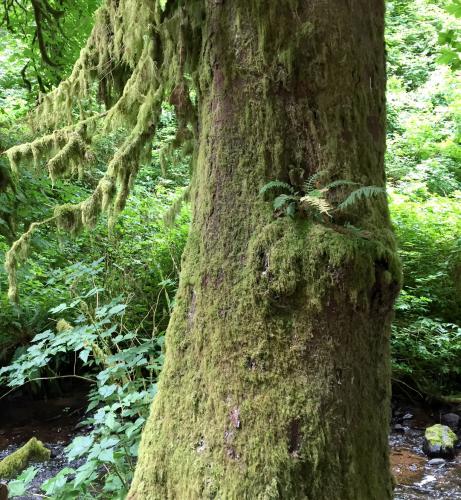 Lichens growing on a tree along the Soda Creek Falls hiking trail in Cascadia, Oregon.

Some species grow very slowly, as little as half a millimeter (a little less than .02 of an inch) a year. Lichens can potentially live thousands of years, making them among the oldest living things on earth. Those with known slow rates of growth have been used by scientists to estimate the time of geological events such as the retreat of glaciers.

Lichens contain a wide array of pigments, making them very useful as a source for natural dyes. They have been used for this purpose since Roman times. One of the more well-known dyes was made from lichens in the genus Roccella. When the lichens were fermented with water and ammonia, a purple dye resulted, which was used to dye garments for Roman royalty. Lichens also contain a unique array of secondary metabolites that have been widely investigated for their antibiotic and antifungal properties.

Lichens can be found in nearly all ecosystems, climates ranging from polar to tropical and in a few cases even aquatic environments. Some grow in association with mosses and utilize moss as a source of water, although lichens are very good at getting sufficient water for growth from a number of sources, including fog. 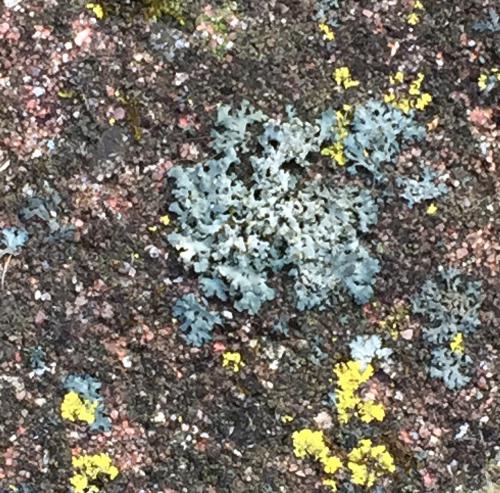 Lichens are known for living on manufactured surfaces as well as natural surfaces. Depending on the species, lichens can colonize leaves, bark or exposed roots of trees and shrubs. They can inhabit the surface of the soil, rocks, cement, gravestones, bricks and leather. While some species of lichens are found in more than one habitat, others give new definition to the term microclimate.

A 1922 study on lichens colonizing stained glass windows, “Revue Générale de Botanique” Volume 34, pages 336-345, found one species of lichen living on smooth surfaced glass and a different species living in the pitted areas of the same piece of glass. Lichens that grow on the acidic surface of rock faces won’t be the same ones found growing on the alkaline surface of cement.

Many factors determine which lichens are growing in a particular environment including aspects of climate—for example, yearly temperature and rainfall; physical factors such as degree of sun or shade; the texture of the growing surface; and the level of pollution in the environment. Many lichens are very sensitive to sulfur dioxide and fluorine gas. The presence and diversity of lichen populations have long been used as an indicator of air quality.

Next time you look at lichens, you may be able to view them with a new sense of appreciation for the ancient and successful entities that they are.

Improve your garden with MSU Enviroweather’s tools and information