Lichens are an interesting and overlooked composite organism found on trees and rocks.

Horticulture hotlines in Michigan are abuzz with calls in the spring and fall about something weird growing on bark. Michigan State University Extension horticulture educators and Master Gardeners working the hotlines receive panicked calls from new gardeners who have found something strange on a tree trunk and suspect the tree has developed some horrible problem. They describe something grayish-green that is thin and has ruffled edges in patches all over the bark. Most are very relieved to find out that their unknown growths are just lichens. Strangely, few people are even aware of their existence. Lichens are unique life forms that should be appreciated.

Many people pass by lichens and do not realize what they are. To them, they are just something stuck on a tree or rock. But lichens are considered “pioneer” life forms because they are first living beings in inhospitable surroundings like deserts, barren rocks or the Arctic. They prefer areas with clean air.

In Michigan, three kinds of lichens are commonly found. Lichens are not one life form, but two, living together in perfect harmony. Various forms of fungi and algae combine to create the different kinds of lichens. The fungus provides protection for the algae and the algae provides food in the process of photosynthesis to the fungus. They remove no nutrients from whatever hard surface on which they are growing. During the spring and fall when the weather is mild and there is enough humidity, they grow. The rest of the time they are dormant.

Foliose lichens can be found on tree or shrub bark. Their name refers to the fact that they are leaf-like. They can have ruffled, lettuce leaf-types of edges that are raised up and actively growing in the spring and fall. In the summer and winter, they appear very flat. They grow best on dry, hard surfaces and are common on older, coarser, drier bark. Growing on bark, they create no damage. If they are found on young trees or shrubs with thinner, moister bark, it can indicate the plants are not growing as well as they should. 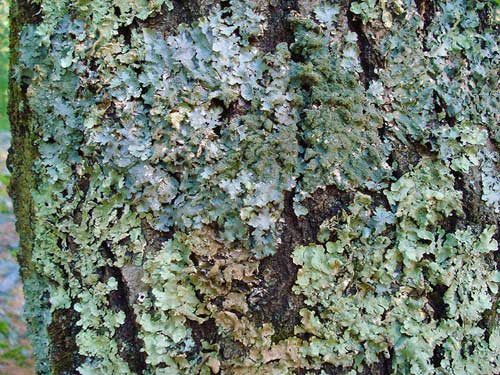 Crustose lichens are flakey or crust-like and are often the most brightly colored. They grow as rounded, flat areas on stone walls, headstones in old cemeteries, rocks and old buildings. Their colors are often rusty, reddish, yellow or mustard as well as browns and grays. 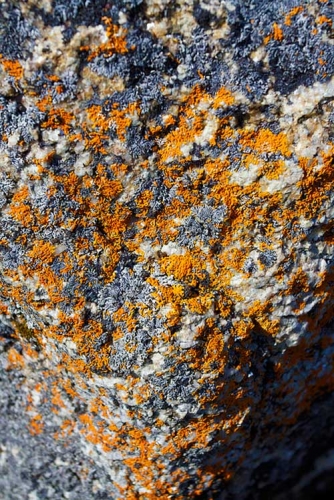 Fruticose lichens are gray-green and branched in an upward direction. Their name means “shrubby.” Some have brightly colored ends like a match head. A common one called “British soldiers” looks almost like a tiny, blooming flower, and is found on dead wood like fence posts. 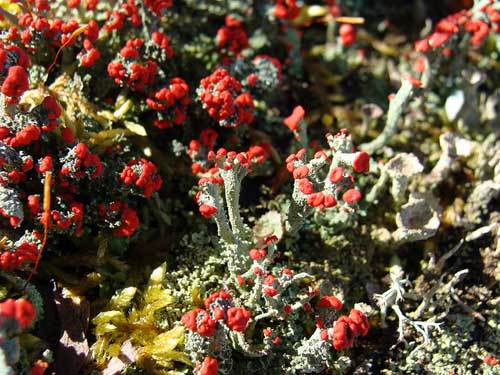 The next time you pass by one of these lichens, stop and appreciate their unusual forms. The cooperative relationship or mutualism of these fungi and algae combinations has lasted millions of years.

Magnolia scale is starting to appear on magnolias