Lirula macrospora takes several years to complete its lifecycle. The fungus overwinters in infected needles on the tree. In late spring through midsummer, infected needles release spores that spread by splashing and dripping rain to new needles. The current year’s needles appear to be the most susceptible. On second year needles, you will find a raised black line, which is a spore producing structure on the midrib on the underside of the needle. Spores are released from these structures on third year needles.

Not much is known about controlling Lirula. MSU Extension recommends following these general plant health guidelines:

Currently, no information is available on the effectiveness of fungicides for control of this disease. Protectant fungicides effective against other needlecast diseases such as chlorothalonil or mancozeb may provide control. For more information, visit the University of Minnesota Extension Lirula needle blight fact page. 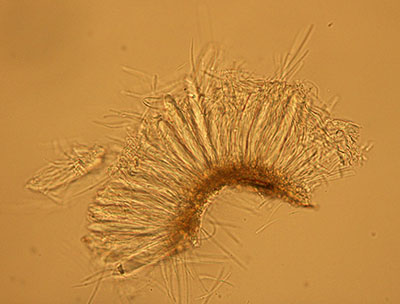 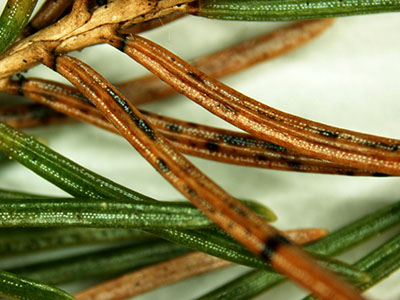 Spores are produced beneath the elongated, slightly raised, black line along the infected needles. When the spores are mature, a crack in the needle opens along this line. Photo: Jan Byrne, MSU.

Who can scout for pests? Anyone!