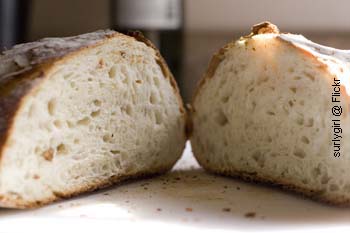 Local food demand provides new production opportunities. Second only to California, Michigan is known for its wide diversity of agricultural products. Bakeries in Michigan who want to use locally sourced ingredients have a dilemma for bread flour. Soft winter wheat has been a major crop for Michigan farmers for many generations. This type of wheat is used predominately for cereals and pastries. Hard wheat grown traditionally in Minnesota and the Dakotas' is the source for bread flour.

A number of years ago, hard red spring wheat was attempted to be raised in Michigan by a handful of organic producers to meet a small specialized demand. After field testing numerous varieties and production practices, these producers have been able to consistently produce a very high quality, hard red spring wheat flour for artisan bread production. Last year, because of increased interest in sourcing locally produced bread flour by a Michigan bakery, two varieties of hard winter wheat were field tested. Winter wheat has the potential to yield higher, contain higher protein levels, and have higher falling values. The varieties were successfully raised and harvested by Michigan State University Extension staff and a farmer cooperator. The wheat was milled into flour and then made into bread by the initiating bakery. The resulting bread was evaluated for flavor, crumb quality, size of loaf and color. Both wheat varieties passed with flying colors. It appears it is possible to produce hard winter wheat in Michigan that meets quality standards for bread production.

Another hard winter wheat production plot has been seeded for evaluation next summer. Although Michigan will likely never be a major hard wheat producing state, and the question remains whether hard wheat can be economically competitive with other crops, it is exciting to know that for local demand, Michigan farmers can produce quality hard wheat and add another crop to their long list of diversified agricultural products.

What does it mean to be a leader on your farm?