Local government plays a leadership role in the "New Economy"

Research suggests local government policies must support and reinforce the "New Economy" and include place-based strategies for successful economic development.

What’s the role of local government in helping to restore prosperity in Michigan in 2013? How can local officials proactively lead their community down a path to an improved economy and quality of life? Well, a growing body of research by the Michigan State University Land Policy Institute and other national and international institutions suggests there is a role for government in embracing and adopting policies that support and reinforce the "New Economy." 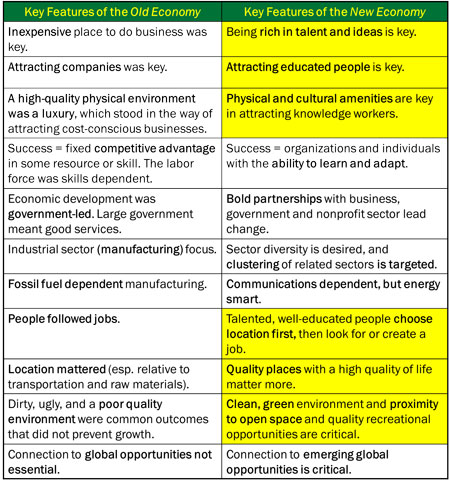 The "New Economy" refers to a global, entrepreneurial, and knowledge-based economy where business success comes increasingly from the ability to incorporate knowledge, technology, creativity and innovation into products and services. Perhaps the single most important point for Michigan is that six of the New Economy features depend on talent (see table comparing Key Features of the Old Economy and the New Economy at right). Since talent is a driver of economic activity in the New Economy and numerous studies show that talent is attracted to high-quality, high-amenity places to live, work and play, communities are realizing that talent is attracted to “place.” In general, talent refers to educated youth, educated senior citizens, entrepreneurs and high-equity immigrants (those that are well-educated, able to invest in a new business, and are eligible for EB5 visas).

Place is a location with physical design attributes, opportunities for social interaction, and/or economic activity in a regional context that elicits an emotional response, in other words, “a sense of place”. A sense of place is a feeling of comfort, belonging, attraction, excitement, joy, etc., that results from place. Many local government master plans include references to sense of place (or quality of life). “Placemaking” is the means of creating unique places that people want to use, be in, enjoy, and remember.

Placemaking is not just physical infrastructure improvements; it is leveraging social infrastructure and linking existing assets. It is not just the act of building or fixing up a space; it is a process that fosters the creation of vital public destinations. Placemaking is not just for cities and villages, either. Township and county policies and investments play a role in placemaking (e.g. planning/zoning, parks, education, safety, social services, even arts/culture investments/programs, such as Emmet County’s International Dark Sky Park). Further, few would argue that there is no role for local government in economic development. As Gov. Rick Snyder has said, “I don’t separate placemaking from economic development. They are intertwined.”

Michigan State University Extension is working with the Michigan State Housing Development Authority, the Michigan Municipal League and other statewide agencies on a coordinated project called the MIplace partnership – a statewide initiative with the purpose of helping Michigan communities learn more about and implement placemaking as an economic development strategy. For more on local government’s role in placemaking in the New Economy, review other relevant MSUE news articles including:

How to handle appeals of administrative decisions

Passenger rail service in northern Michigan being studied: Part one

Vague or subjective ordinance standards: In the court’s opinion they stink! Part 2