Lodged corn may be a sign of a corn rootworm problem

Take note of corn lodging in fields that have a history of continuous corn. This may help you head off a problem with corn rootworm in 2014.

Corn hybrids with Bt traits for corn rootworm have provided growers with a good tool for controlling this pest. However, beginning in 2010, just seven years after the introduction of the first corn rootworm Bt trait into cropping systems, the heavy corn producing states began to see problem fields. The common denominator in problem fields was multiple years with continuous corn and using the same Bt trait (Cry3Bb) year-after-year. Michigan is on the fringe of this problem area, and until 2012, Bt traits for corn rootworm were performing as expected. In 2012, a Cry3Bb field with severe damage and unexplained high rootworm numbers was identified in central Michigan. In 2013, more problem fields involving several different types of Bt were reported in the same area.

Since our goal is to preserve the usefulness of Bt rootworm traits as long as possible, we are asking growers to look at their cropping history and see if they may have fields that are at risk. A field history that precipitates problems includes continuous corn and using the same Bt trait year-after-year. As you harvest this fall, look for signs that corn rootworm was present at high levels. Signs at harvest include lodged corn, evidence of poor pollination (poor grain fill), and even presence of large numbers of beetles during chopping. If roots are dug, you may see evidence of severe early root feeding, although at this point roots may have grown back, masking the earlier damage. 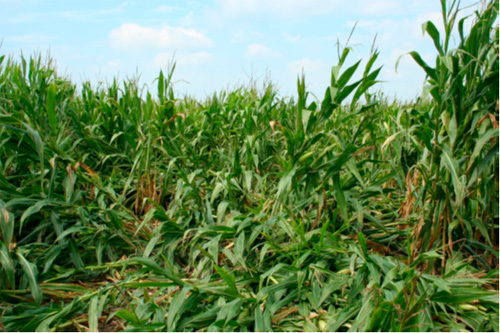 If this is you – take action now! ROTATE! The best fix is to rotate to a non-host crop. This could be soybeans, alfalfa, dry beans or sugarbeets. Growers should also eliminate volunteer corn. If rotating is not an option, plant a hybrid that has a different Bt trait for corn rootworm or, if possible, use a soil insecticide instead of a Bt trait.

Even before you detect a problem, you can help preserve the efficacy of Bt traits in corn by:

If you must grow continuous corn:

Note that the use of a soil insecticide on top of a Bt hybrid is not recommended by corn entomologists in the Midwest including Michigan State University Extension. Research trials in other states show little or no yield benefit from applying soil insecticides to Bt corn. Insecticides may also mask a problem with the Bt hybrid.

Detect problems early, next season, scout continuous fields for beetles and damage in mid to late-July, and report problems immediately to your seed dealer and also to Michigan State University.

Although it is best to recognize the problem field in late July, recognizing problem fields at harvest still provides growers with an opportunity to put plans in place for 2014. Follow the best management practices. Rotate fields to a non-host crop if at all possible and when you are buying seed for next make sure you are at least rotating the trait. If you have questions, you can contact your Michigan State University Extension office, or Chris DiFonzo, MSU Entomologist.

Herbicide Resistance? Now is the Time to Check!