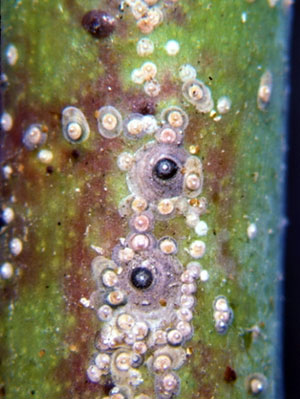 Since its introduction into California in 1870, San Jose scale, Quadraspidiotus periciosus, has become a widely distributed pest of apple, peach, pear, plum, apricot, currant, gooseberry, quince, woody ornamentals and sweet cherry in the United States. These small, sucking insects feed on sap from limbs and leaves of host plants as well as on the fruits of apple, peach and pear. A high population of San Jose scale is needed to cause significant damage to fruit trees, and older trees can withstand more feeding compared to younger plantings. Depending on the population size, young trees can be killed by San Jose scale in two or three years. In Michigan, San Jose scale is mainly a concern on apple, peach, pear and plum, but since the start of a San Jose scale monitoring program in the northwest in 2007, we have observed sporadic but potentially more widespread San Jose scale outbreaks in sweet cherry.

Sweet cherry growers in northwest Michigan observed damage in orchards in the 2013 season and suspected that San Jose scale was the cause. Growers reported that symptoms were more prevalent on light sweet cherry varieties, such as Gold and Emperor Francis. Damage was visible in the upper canopy or tops of trees where branches had died back. Tree gummosis was also observed. Damage in those high branches is likely linked to sweet cherry tree sensitivity to ethephon applications when this plant growth regulator is applied under hot and dry conditions. At this time, we hypothesize that a combination of San Jose scale infestation and ethephon phytotoxicity are related to this damage.

In winter months, bright yellow, early instar San Jose scale nymphs are protected under a waxy shell that is tightly adhered to bark. This waxy shell is inconspicuous and camouflaged on tree branches, making visual detection of scales difficult. However, looking for scales while pruning sweet cherry orchards while trees are dormant may indicate whether or not management action for San Jose scale this spring is needed. While pruning sweet cherry trees, look for scales on scaffolds, branches and spurs after these prunings have been removed from the tree. Growers should pay particularly close attention to older sweet cherry trees, tops of the trees and light sweet cherry varieties.

When the sap begins to run in spring, scales feed on sap and grow until late May when males come out from under the protective scale to mate with females. Monitoring for San Jose scale males using a pheromone-baited trap generally begins in the spring when males emerge. It is best to place the traps in trees where scales have already been detected to catch the newly emerging males early. Check traps regularly, at least once per week.

Each mated San Jose scale female is capable of producing nine or 10 young per day for up to six weeks. These bright yellow to orange young, also known as “crawlers,” attach to trees with their mouthparts and feed on tree sap. Crawlers can be monitored using dark sticky tape wrapped around tree branches. The dark tape provides contrast that makes visual detection of the crawlers easier.

After three weeks, crawlers molt resulting in a loss of their old skins, legs and antennae and become a flattened sac with waxy caps that remain attached to the trees with their mouthparts. The protective waxy shell expands as the scales continue to grow, molt and produce waxy secretions. These scales will develop, mate and produce a second generation. In years with an extended warm summer, a third flight of San Jose scale males may occur, as observed in apples and peaches at the Trevor Nichols Research Center in 2012.

If San Jose scale populations were high at the end of the 2013 season and growers saw visible branch dieback, control targeting adults pre-bloom should be applied this spring. Monitoring for San Jose scale males and crawlers in 2014 will allow growers to decide if management is needed and when to take action. The table below provides dormant, petal fall and first cover recommendations from Michigan State University Extension for insecticidal activity on San Jose scale in sweet cherry. Based on previous observations of San Jose scale populations in northwest Michigan, insecticides applied in mid-August target second generation crawlers.