Look out for aphids in Christmas trees

Aphids feed on conifers by sucking juices from branches, shoots and needles. Feeding from aphids can cause the foliage to become curled; distorted or affected trees may lose their needles.

Some of the common conifer-feeding aphids produce lots of honeydew, which leads to black sooty mold. On the other hand, there are many insect predators who relish aphids. Often aphid problems take care of themselves – the predators knock the population way down fairly rapidly. The exception is when ants are present – they will protect the aphids from the predators.

In the last issue, I talked about the characteristic curling of the new growth caused by balsam twig aphid which is showing up on Fraser and balsam fir trees. This week, I had several new aphid problems show up.

Cinara are a group of several species of large brown or black aphids that feed on many conifers. I had a Douglas-fir branch brought into the office that had several hundred of these aphids covering the branch. The foliage glistened with honeydew (excrement produced by the aphid). When we find these in a Christmas tree field, we usually see only a few trees with aphids while the rest remain aphid-free. Usually, they are not a problem and disappear after several weeks.

On concolor fir, I found a woolly aphid that is thought to also be a Balsam twig aphid. When we find this aphid in concolor, we don’t usually see much damage even with high populations. Growers with this kind of problem should monitor the trees. If you have high populations and the trees will be harvested this year, you may want to apply an insecticide. 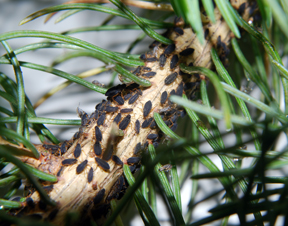 Tips for success with your first real Christmas tree