Look out for mites in Christmas trees

Although the insects may be actively feeding by now, we often don’t see the damage until later in June or July. When plant foliage begins to show off-green or stippled color and spider mites are suspected, perform a foliage check. Take a piece of white paper (Eriophyid mites show up best on a black background), hold it under a branch suspected of having mites, and strike the branch hard against the paper. This should dislodge the mites, and even though they are very small, you should be able to see the dark, oval spider mites against the white background or the cream-colored mites on the dark sheet. Examine three to four places around the plant. If you dislodge ten or more mites at each site, it would be advisable to apply a registered miticide according to label directions.

We typically find spruce spider mites on Fraser fir or spruce and but have found them on other conifers species.

Spider mites have tiny mouthparts modified for piercing individual plant cells and removing the contents. This results in tiny yellow or bronze speckling on the needles. When many of these feeding spots occur near each other, the foliage takes on a yellow or bronzed cast. Once the foliage of a plant becomes bronzed, it often drops prematurely. Growers should keep an eye out for the dark mites or their webbing, especially if you had damage from mites last year. Scout the oldest foliage, near the stem of the tree – that’s where the mite populations build up first. 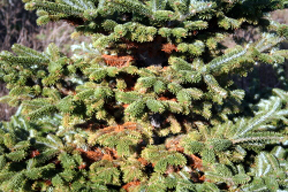 Eriophyid mites have been found on Black Hills spruce and Fraser fir.

Eriophyid mites are very tiny, carrot-shaped and cream colored. In order to see them, you need at least a 10x hand lens. Even then, the insects are barely noticeable. Eriophyid mites discolor and distort foliage by feeding on the buds and needles. Look for pale yellow to bronze needles. This damage can be confused with other symptoms from drought, winter or herbicide injury, etc. 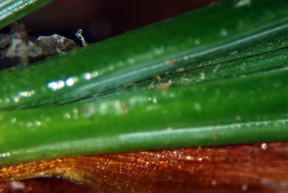 In past years, I have most often found admes mites on white spruce or Black Hills spruce, but we will find them on Colorado blue spruce and Norway spruce as well.

They’re larger than the spruce spider mite and have a dark red/brown body with light tan legs. Their feeding can cause discoloration of the foliage. If populations are reaching damaging levels, the treatment for this pest is similar to that of spruce spider mite. 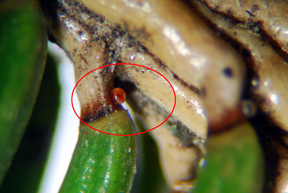 If you see this type of damage you may want to send a sample into MSU Diagnostic Services to confirm which type of mite you have.