Look out for unwanted squirrel hoarding

Squirrel behavior in the fall can lead to unwanted visitors in homes and other buildings.

As autumn approaches, we historically have set aside foods for winter by canning or drying and otherwise storing foods for the winter here in the north. Of course, we aren’t the only creatures preparing for lean times. At this time of year, it is a good idea to check enclosed spaces, especially garages, attics, sheds and basements, for other creatures that may choose those places as opportunities to store food or prepare a nice, warm, dry nest for the upcoming winter months.

Although plenty of critters in the rodent world search out human dwellings for food storage and shelter, squirrels are some of the most notorious for food stashing behavior. We are frequently unwitting hosts, ending up with messy, and sometimes damaging, consequences. Different squirrel species have different hoarding habits. In Michigan, two of the most common are the red squirrel (Tamiasciurus hudsonicus) and eastern gray squirrel (Sciurus carolinensis). Being aware of the critters that inhabit your area can help to prepare defenses against becoming a storage unit for them.

Red squirrels are regular hoarders that are commonly found throughout Michigan. Their favored food sources include buds and inner bark of trees, fungi, fruits and tree seeds, especially from various conifer species. These squirrels are the greatest perpetrators when it comes to creating large caches, or “middens”, of pine cones and other seeds in hidden places. Red squirrels are small and energetic, with rusty-red bodies and white underbellies. Their tails are relatively small for a squirrel, with the same rusty coloration as the rest if its body. They are also noisy, often sounding like a squeaky wheel in the trees. 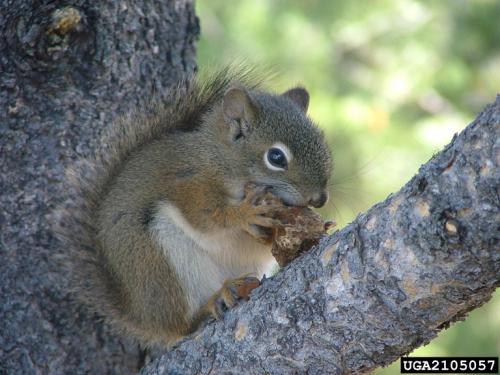 In comparison, eastern gray squirrels are larger with bushier tails. As the name suggests, these squirrels are mostly gray all over their bodies. There is significant variation in this coloring, including a black variant that is found in multiple locations across southern Michigan. They are less interested in pine seeds but do favor other tree nuts, small fruits and sometimes insects. Unlike red squirrels, gray squirrels store their food finds via “scatter hoarding”, burying or stashing small amounts of seed in various locations within their individual territories. They rely on their keen sense of smell to recover their stored booty but do not always end up claiming everything. The seeds of many tree species, including oaks, walnuts and hickories, benefit from their poor memories and end up sprouting. 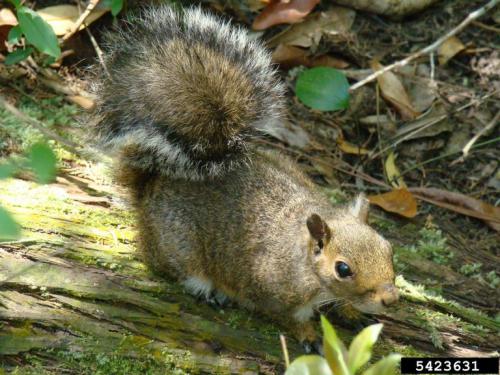 According to research conducted by Dr. Robert Swihart at Purdue University, eastern gray and red squirrels’ different caching behavior also affects potential regeneration of valuable tree species. The gray squirrel’s scatter hoarding behavior across a range of ground locations means that that species is more critical to forest regeneration than the red squirrel’s with its larger middens.

Regardless, if invasion of these rodents is suspected and killing them is undesirable, live traps are available in local garden or hardware centers. Note, however, that a relocated wild animal may not survive very long in an unfamiliar space. It is likely that that space has been claimed by other critters and will assertively defend it from new additions. The best remedy is to reduce accessibility in the first place by placing metal screens over openings like fireplaces, vents and under stairs. Check for any cracks or holes in basements, sheds and garages. Even the smallest openings can serve as an invitation. Also, regularly check spaces that could serve as midden sites, such as storage closets, tool chests, lawn mowers and, yes, under a car’s hood.

Understanding wildlife behavior and habitat requirements can go a long way toward preventing critter problems. For more information, consult Managing Michigan’s Wildlife: A Landowner’s Guide. When wildlife of these types does become a nuisance, the Michigan Department of Natural Resources has multiple references that may offer solutions online.