Funds from the Michigan Tree Fruit Commission provide new insight on trapping strategies for a familiar pest of Michigan’s peach and apple industry.

Oriental fruit moth, Grapholita molesta (Busck), is a key pest to Michigan’s peach and apple industry. Crop scouts have historically relied on delta-style traps baited with sex pheromone lures and placed inside of orchards to monitor the flight of the multiple summer generations to inform integrated pest management (IPM) decisions. Crop scouts in west central Michigan noted in 2016 and 2017 that oriental fruit moth catches in pheromone-baited traps was low, inconsistent and sometimes not observed despite noticeable damage from oriental fruit moth, particularly at the edges of orchards. Scouts had further noted that catch from traps placed inside of peach orchards treated with mating disruption seemed to be particularly low.

Despite these low trap catches, growers and processors reported record damage to the processing peach crop in west central Michigan in 2016, some sites experiencing 50 percent or more rejection at grading. This trend repeated in early 2017 and caused confusion and frustration for those making management decisions. Several factors, including pyrethroid insecticide resistance, were suspected in local oriental fruit moth populations. However, another significant factor has proven to be trap efficacy.

A short trial conducted in 2017 in Oceana County by Michigan State University Extension indicated that the location of the trap within the orchard was an important factor when using Scentry pheromone-baited tent traps. Traps placed 20 meters away from the edge of orchards, particularly those placed at wood lines adjacent to orchards, were more efficient and more consistent in catching oriental fruit moth. Traps placed 50 meters inside of orchards treated with mating disruption caught few moths, and rarely caught moths in back-to-back weeks. This seemed to be mainly the case during the beginning and the end of the three generational flights.

This is particularly problematic because MSU Extension recommendations suggest that biofix should not be set until moths are captured in two consecutive weeks, and the traps in this trial, particularly those placed either at edges of orchards or 50 meters inside of orchards, rarely caught moths for two consecutive weeks. Furthermore, most applications of insecticide used for oriental fruit moth target eggs and early larval instars rather than adults or late larval instars, making incorrectly timed insecticides largely ineffective.

Based on these data, MSU Extension researchers hypothesized that the reason trap catches for crop scouts have been low while damage has been high was because the pheromone disruption was interfering with trap efficacy within blocks, causing incorrectly timed or skipped sprays. Scouts that were surveyed reported placing their traps at least 15-20 or more meters inside of orchards, which was the worst location to catch oriental fruit moth with a Scentry pheromone lure based on 2017 data.

It is also likely that mated female moths were travelling in to peach orchards in high numbers from outside of the orchard, resulting in severe damage to the edges of orchards. Mated females are not deterred by the presence of mating disruption and are looking for suitable sites to lay eggs, so a disrupted block could still experience significant edge damage in the presence of a strong edge population. Additionally, traps placed inside the block were not recording catches due to the presence of the mating disruption. For this reason, it was suspected that if mating disruption was present and a pheromone baited trap is being used, it would be advisable for scouts to place a trap outside of the orchard in order to set an accurate biofix for the start of flight, allowing them to accurately pinpoint biofix and correctly time products with ovicidal and/or larvicidal properties. It also has lead researchers to suspect that a trap baited with something besides a sex pheromone might be more effective in monitoring this pest.

While the results in 2017 provided insight on field placement of one of the most common traps on the market, they did not provide insight on other similar products from other companies or on newer lures that might be more efficient regardless of placement. To provide insight for industry crop scouts and area farmers, a larger trial was conducted in 2018 at three peach orchards in west central Michigan and three peach orchards in southwest Michigan. All six orchards were treated with mating disruption and all six had at least one border against a wood line. Two lures were compared at all locations in the study; a Scentry pheromone lure and a new Trece two-part lure based on a plant volatile feeding attractant (called the “Trece combo lure” for the duration of this summary). A third lure, a Trece pheromone lure (called the “Trece ph. lure” in graphs below), was used at two orchards in west central to add a pheromone lure from another manufacturer for comparison.

We hypothesized that placement 20 meters away from the orchard would improve the efficacy of both pheromone-based lures but that placement would not make a difference for the traps baited with a feeding cue. Since the feeding cue lure should not be affected by mating disruption, we hypothesized this may be a more efficient method of monitoring oriental fruit moth inside of orchards that had deployed mating disruption.

However, the Scentry lure-baited traps were still not as attractive to oriental fruit moth as any of the Trece combo lure traps at any position. Pheromone lures from both Trece and Scentry performed similarly at the two sites where they were both present, catching fewer moths than the Trece combo lure overall and the most moths when placed in the woods 20 meters away from the edge of the orchard (Fisher’s PLSD p<0.05). The pheromone-only lures also did not catch as consistently from week to week as the Trece combo lure. The combo lure sustained visible increases, peaks and declines for the summer flights, while the pheromone-only lures rarely captured in consecutive weeks. (Figs. 1, 2, 3) 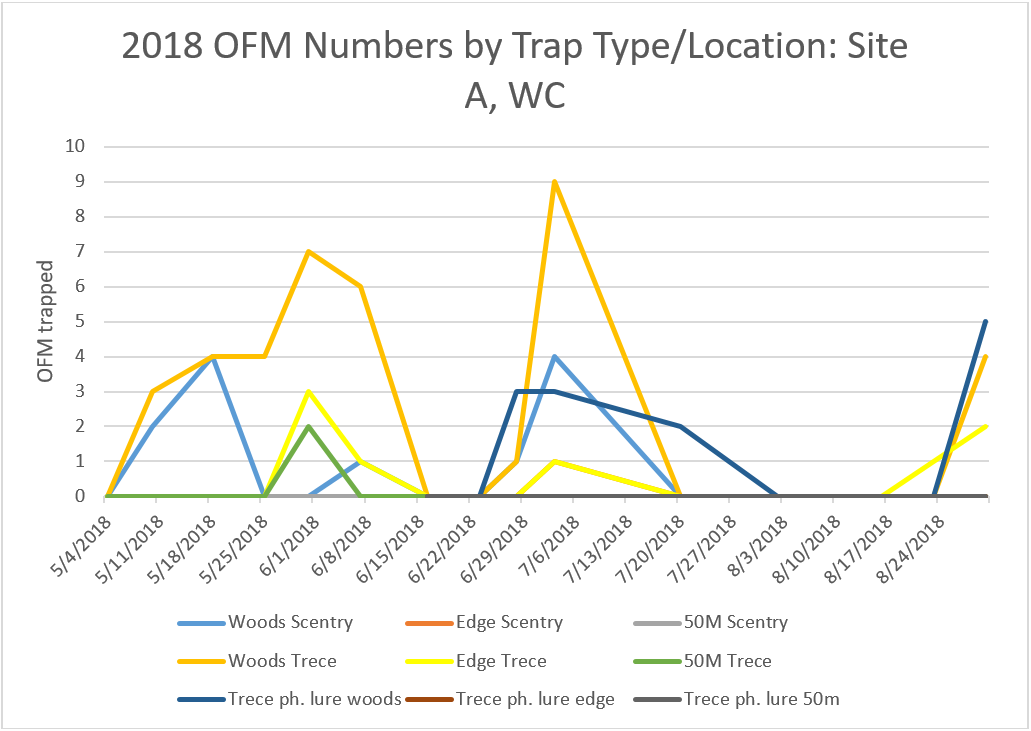 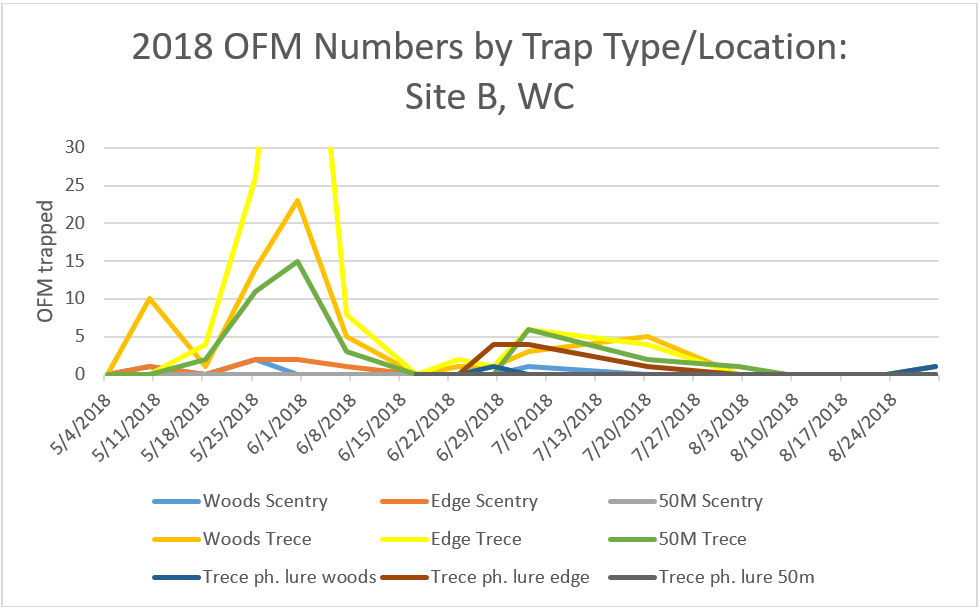 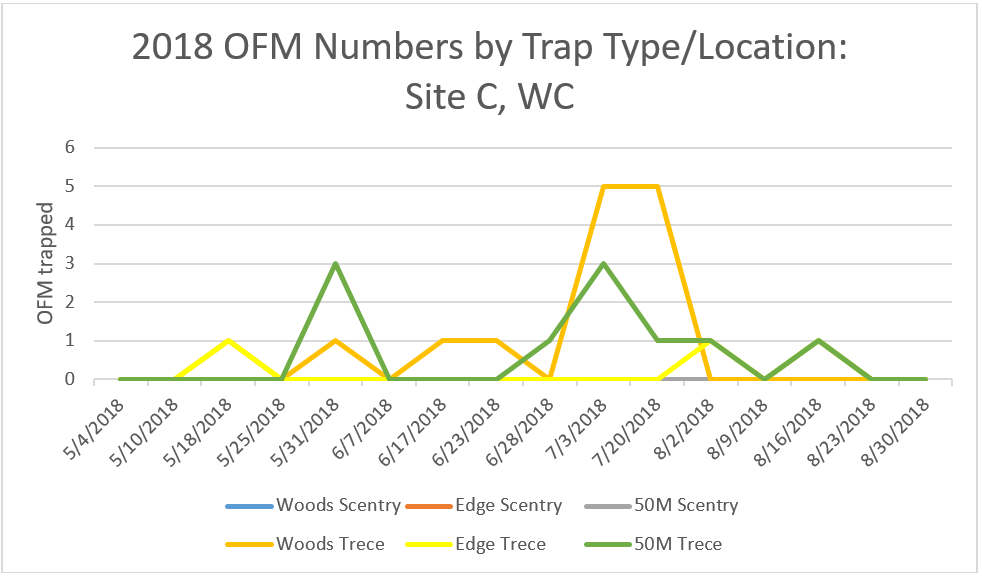 Results from the southwest Michigan sites

Similar results were noted in southwest Michigan in 2018 to those in west central Michigan. The Trece combo lure at all three field placements trapped more moths than the Scentry pheromone lure at any of the three placements over the duration of the season. Placing both the Trece combo and Scentry pheromone lure 20 meters from the edge of the orchard and into the woods resulted in the highest cumulative trap catch for each trap type. The edge effect was particularly distinct for the Scentry pheromone lures; traps placed 50 meters inside of orchards did not catch any oriental fruit moth at any site during the entire growing season, and traps placed at the edge caught less than five through the entire growing season. 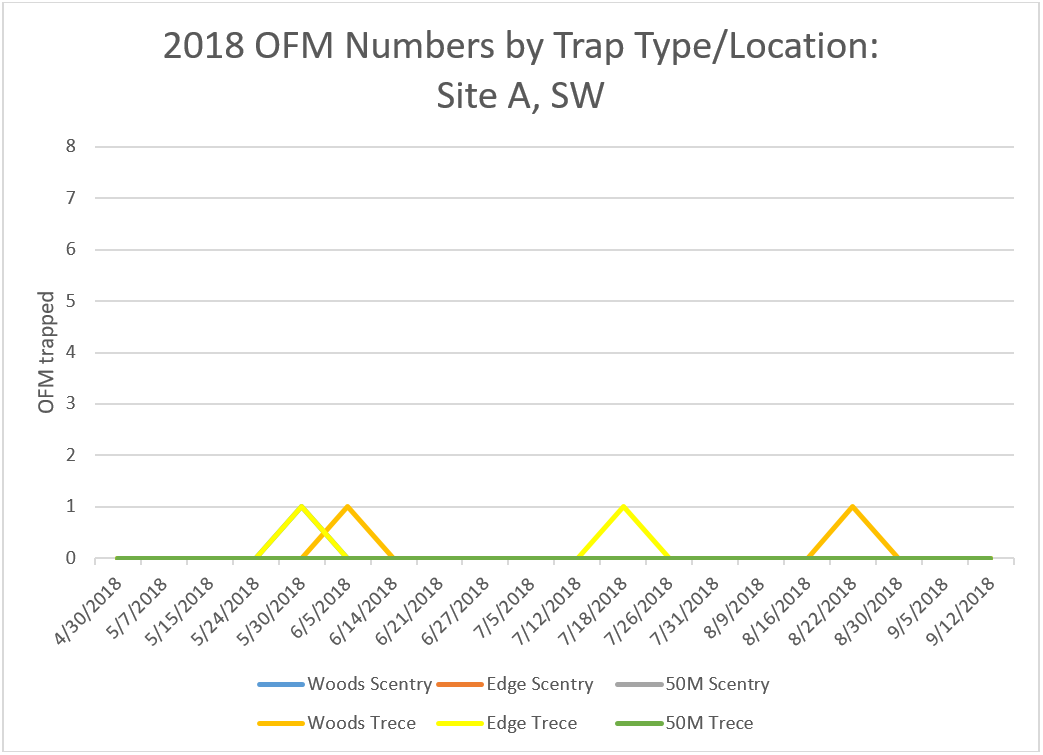 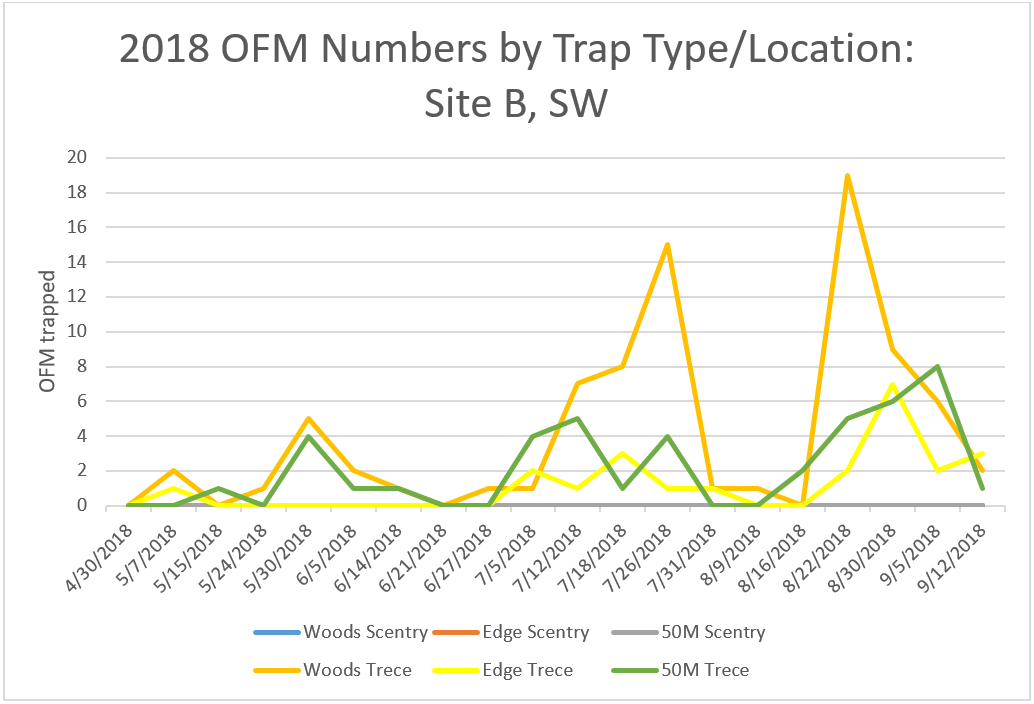 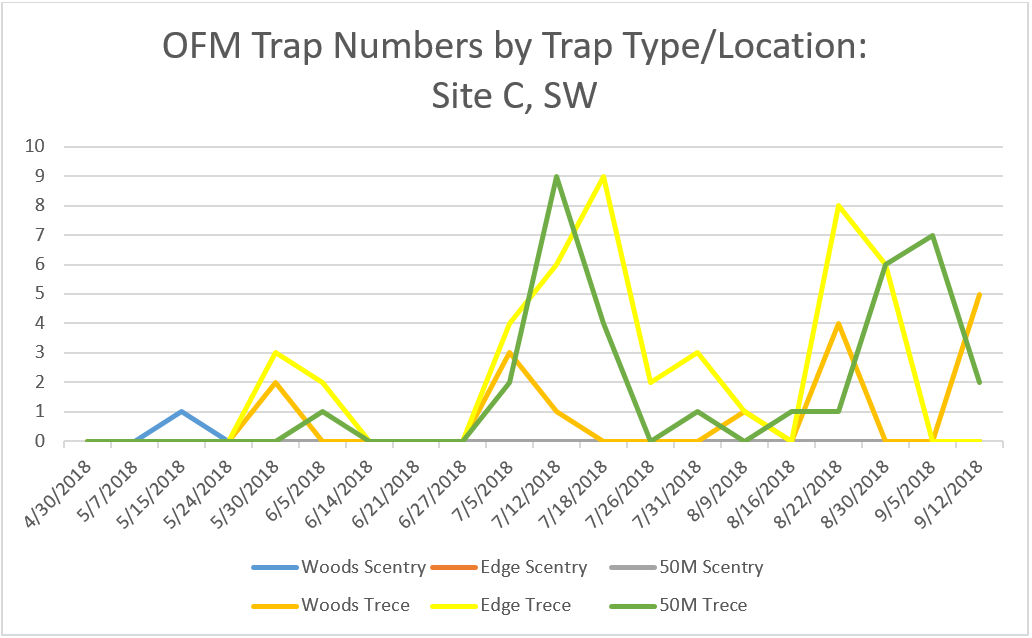 The combo lure, which is based on a feeding attractant, was generally more effective than the pheromone attractant in all six of the orchards studied, but the combo lure does not have the same established management thresholds that the pheromone lure does. Further research is necessary to relate our established pheromone-lure-only thresholds to catch numbers in combo-lure-baited traps before the industry uses them to make management decisions. While the distinct flight of each generation was easier to distinguish with the combo lure, it is also possible it is so sensitive that using established thresholds would result in significant over-spray for growers.

Consistency is another major argument in favor of the combo lure. The pheromone-only lures delivered inconsistent results, often failing to trap in subsequent weeks. This was particularly noticeable when placed inside of orchards. The combo lure is the more consistent of the two lure types and will likely be used in the future instead of the pheromone-only lure due to ease of observing population patterns from week to week. Since most recommendations state that biofix should be set after two weeks of consecutive catch of the pest, this would be the more effective system.