Twelve-year-old Travis Brown’s death in the summer of 1998 followed a similar pattern of other drownings at the Hiawatha National Forest Service Campground, and U.S. Forest Service personnel began to question the safety of their waters for swimmers. Soon after, Michigan Sea Grant, Michigan State University Extension, and the Brown family of Gaylord met with Forest Service officials on drowning issues. This meeting led to the formation of the Mackinac County Water Safety Review Team, which helped bring many groups together to join in efforts to find ways to combat the drowning problem.

The review team’s first task was to address drownings along the U.S. 2 shoreline in Mackinac County on northern Lake Michigan and work to prevent future drownings. The group coordinated with emergency management personnel from several agencies, provided public service announcements in local media during the summer months, developed educational brochures and a traveling display, and placed signs warning swimmers of possible dangerous currents in the area of concern. Through these measures, the team was able to increase public awareness about dangerous currents along the northern Lake Michigan shoreline so swimmers and parents of young swimmers could take appropriate precautionary measures.

Additionally, the review team coordinated several public awareness days at the beach. At these events, information was presented on how dangerous currents develop and what swimmers can do to escape them. The team also provided tours of the safety stations that were placed every mile along the area of concern. The stations include life rings, life jackets, throw bags, and surf rescue boards to facilitate the rescue of swimmers in trouble. The team reached out to other Great Lakes Sea Grant programs and coordinated the first Great Lakes Rip Current Conference that took place in St. Ignace. Since then, many Great Lakes Dangerous Currents Conferences have been held throughout the Great Lakes region.

The review team’s efforts and accomplishments have become a model of efficiency and collaboration for other regional efforts throughout the Great Lakes.

The Mackinac County Water Safety Review Team was able to accomplish amazing tasks in a relatively short time and their efforts have been effective in saving lives. People are becoming aware of the potential risks of Great Lakes dangerous currents and that there is safety equipment available in many areas in case of an emergency. After Travis’ death, the Brown family has been an int 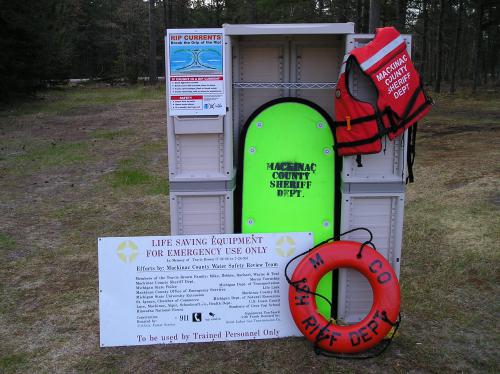