Is input-intensive management the key to increasing wheat grain yield and producer profitability?

Inputs were evaluated utilizing an omission treatment design. To better understand wheat response to the removal of individual inputs, grain yield differences were examined between wheat that received all six inputs (i.e., intensive) and compared to wheat that contained all but one of the inputs. Inputs were also evaluated utilizing the reverse approach by comparing grain yield differences between wheat that had no additional inputs other than a base rate of nitrogen fertilizer (i.e., traditional) and compared to wheat that contained each individual input applied one at a time. The base rate of nitrogen fertilizer was 90 pounds per acre while the high nitrogen component consisted of a 20 percent increase in total nitrogen rate (108 pounds per acre).

Across site-years, grain yield was not significantly increased utilizing intensive management (Fig. 1). The intensive system had an average product and application cost of $126 per acre with an average break-even yield of 32 bushels per acre while the traditional system had an average cost of $44 per acre and an average break-even yield of 11 bushels per acre. Traditional management containing only a university recommended nitrogen rate increased economic net return an average of $94 per acre over intensive management (Fig. 2). No single input applied generated a positive return on investment in either year. Although fungicide and urease inhibitor applications resulted in significant grain yield increases in 2016 and 2017, respectively, corresponding net return was not increased. 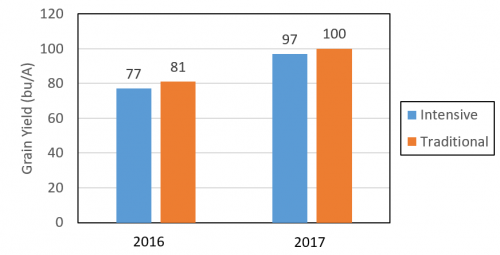 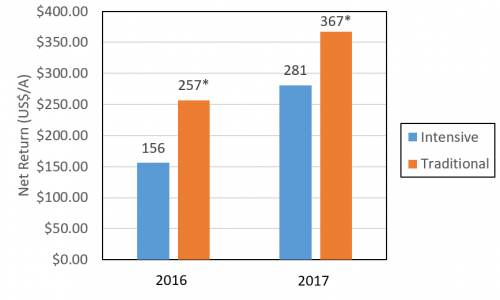 Simplicity is often about gains, not losses. As growers prepare for another growing season, doing simple better may be more about gains made by removing distractions as compared to perceived yield losses by not applying what may be prophylactic inputs.

For additional information on this research trial and others, please visit the Michigan State University Soil Fertility Research website and view our online video updates.

Dr. Steinke’s work is funded in part by MSU’s AgBioResearch.