Magnesium versus Manganese: What’s the difference? - Part I

Understanding the differences between magnesium and manganese in relationship to crop uptake, deficiency symptoms and soil pH is critical to managing these two essential nutrients for crop production.

Magnesium (Mg) and manganese (Mn) are essential plant nutrients. They are absorbed by plant roots as bivalent cations (Mg++ and Mn++). Deficiencies of both nutrients have been diagnosed in Michigan. There are important differences between the two nutrients. Their deficiency symptoms may be hard to distinguish in certain situations.

Magnesium is one of the three “secondary” plant nutrients along with sulfur and calcium. It is taken up in moderately large qualities compared to only trace amounts of Mn (Table 1). Magnesium is a constituent of the chlorophyll molecule. So Mg deficient plant leaves will become pale-green to yellow and then develop interveinal chlorosis (yellowing between veins). Magnesium is mobile in the plant and therefore the symptoms will start with the lower (older) leaves.

Table 1. Sufficiency ranges of magnesium and manganese in corn ear leaf just before silking, based on plant tissue analysis.

Most Michigan soils contain sufficient amounts of Mg. However, deficiencies have been observed particularly in the southwestern and western areas of Michigan on acid, coarse-textured soils.

Magnesium availability decreases in acidic soils when pH gets below 6.0 (Photo 2). Michigan State University Extension recommends Mg applications when the soil test value is less than 35 ppm on sandy soils or less than 50 ppm on fine-textured soils; also when Mg is less than 3 percent (as a percent of exchangeable bases on an equivalence basis) or when percent exchangeable potassium (K) exceeds the percent Mg on an equivalence basis. Applying high rates of potassium (K) fertilizer can induce Mg deficiency. Livestock feeding on Mg deficient grass can develop grass tetany disorder. 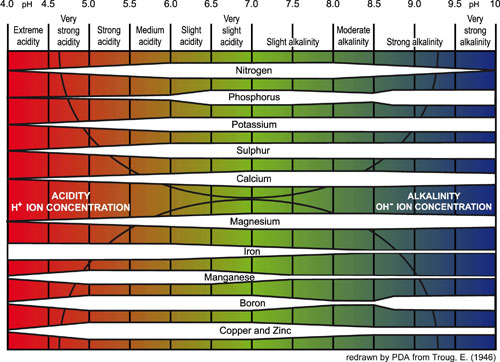 Manganese is not a part of chlorophyll, but it is vital for enzyme systems involved in photosynthesis. Thus, Mn deficiency also develops yellowing and interveinal chlorosis on leaves (Photo 3). Manganese is less mobile in the plant, therefore symptoms will appear first in the uppermost (youngest) leaves. Since yellowing of plants can be due to several factors such as K, Mg, iron deficiency, herbicide injury, poor nodulation and cyst nematodes, good scouting practices and tissue sampling may be needed to confirm the exact cause. Symptoms may look similar from a distance, but differences in the yellowing pattern may offer useful diagnostic clues. MSU Extension recommends that Mn be applied in a band as a starter fertilizer at planting or as foliar spray during the season. 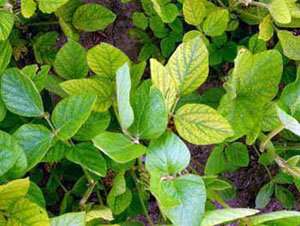 In contrast to Mg, manganese availability increases in acidic soils and decreases markedly as soils become alkaline and pH gets above 7.0 on mineral soils (Photo 2). Soybeans will show Mn deficiency symptoms on high pH soils (Photo 3). The critical soil test value on mineral soil at pH 6.3 is 6 ppm and at pH 6.7 is 12 ppm. Manganese deficiency symptoms on soybeans also appear on peat or muck soils (Photo 4). In these soils, Mn deficiencies occur when the soil pH gets above 5.8 (Photo 5). The soil organic matter and Mn ions usually combine to form insoluble compounds. This reaction is favored by increasing pH. 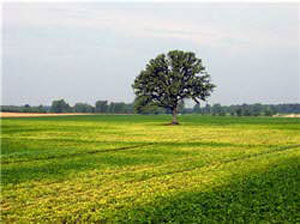 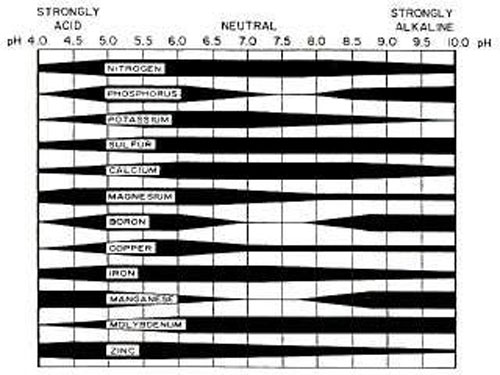 Research indicates that soil tests for Mn do not always closely correlate with crop response to Mn fertilizer. One reason is because extractable Mn level decreases when soil samples are air-dried. The Mn oxidation state increases in the drying process, thereby decreasing its solubility and extractability.