Magnolia scale is starting to appear on magnolias

Blackening branches and leaves on a magnolia often indicates a serious infestation of magnolia scale.

The saucer magnolia, Magnolia x soulangiana, is a valued ornamental plant in many landscapes across Michigan. Treasured for its large, 5- to 10-inch cupped flowers colored in white with pink and purple tints, it is a plant with few major problems. Often the most common problem is browning flowers due to a late spring frost. One other issue that many magnolias face is damage from the feeding of a scale insect. Often it goes unnoticed until other problems associated with it begin to occur.

Late each summer, we start to receive calls at the MSU Extension office concerning magnolias with branches turning black and a large increase in bee activity in the tree. Close inspection of the tree reveals branches that are blackened and covered with gray to tan bumps. These bumps are magnolia scale, Neolecanium cornuparvum (Thro), reaching up to 0.5 inches in diameter in its adult stage. This is the largest scale found in our landscapes. Though it does not look like an insect, it is. It feeds on saucer, star, lily and cucumbertree magnolias. 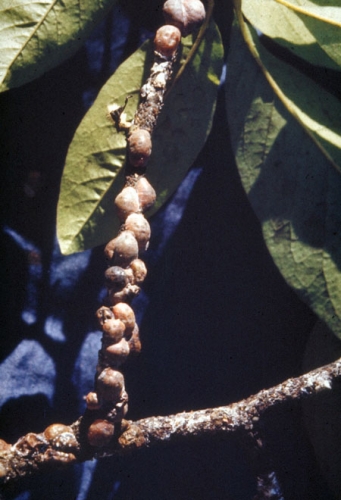 These insects feed by sucking the sap out of the branches. Excess sap is excreted by the scale, creating a sticky-sweet material called honeydew that drips onto leaves and branches. A fungus called black sooty mold begins to grow on the honeydew, turning branches and leaves blackish. The sweet honeydew also attracts yellow jackets and bees that forage on the sweet substance.

Like other types of scale, it often goes unnoticed until populations get so high that they begin to encrust the branches of the tree. Large numbers of scale pulling moisture out of the plant can cause branches to die. Getting the pest under control can be a challenge, but it can be done.

First of all, the health of the plant needs to be considered. Watering during dry periods is critical to reducing the stress of plants in normal times and is even more important when scale insects are drawing moisture out of the plants.

Insecticidal sprays can help if timed properly. Horticultural or “summer” oils can be used to manage the young scales (called crawlers) which are born from August to September. These crawlers are the mobile stage of the insect. Moving from under the adult female scale, they find sites along branches where they begin to feed. Treatments should target the crawler stage of the scale. Timing the hatch is easily predicted through the Enviro-weather website from MSU. Enviro-weather indicated that in Commerce Township, Mich., crawlers began to appear on August 10, while in Elk Rapids, Mich., the crawlers appeared the last two days in August.

To get the hatching date, go to the Enviro-weather website at www.enviroweather.msu.edu and choose a nearby station representative of your area by choosing from the station pull-down menu in the upper right of the screen, or selecting one of the yellow circles on the Michigan map on the homepage.

After you pick your station, click on Land & Nursery in the green toolbar on top of the page. 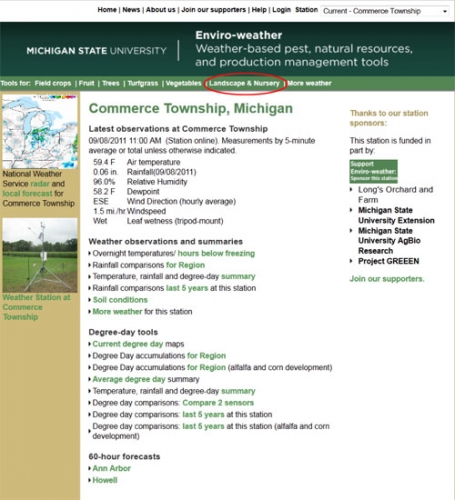 To the left of the page is a list of resources. Click on the resource “Deciduous plants” to open up the folder and bring down more resources (see top red arrow). Next, click on “Gypsy Moth, Black Vine Weevil, Cottony Maple Scale, and Magnolia Scale,” (see bottom red arrow). 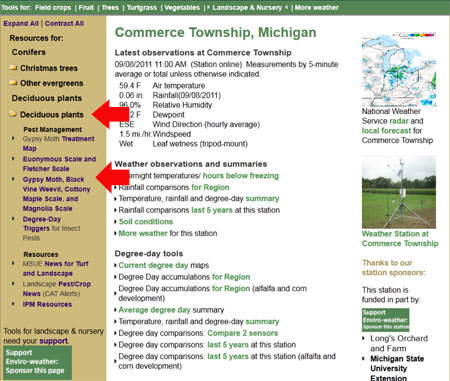 The bottom row in the table will you give the egghatch date for magnolia scale crawlers (see red arrow). 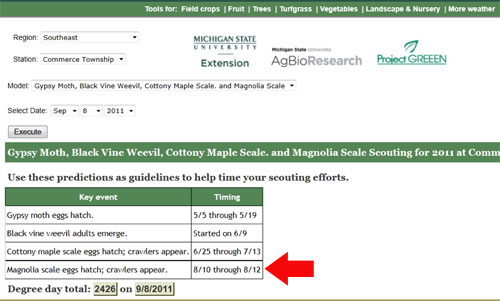 The red arrow points to the date magnolia scale eggs will hatch.

A systemic approach utilizing insecticides would be to use a material such as Imidacloprid, which can be applied to the root zone of the infested plant where it will be taken into the tree. Water movement within the tree will transport the systemic insecticide up the tree to where the scale is feeding. This type of treatment would have to be applied a few weeks before crawlers hatch to allow the insecticide to move up the plant.

For more information on natural enemies and management options, see the University of Kentucky Extension’s webpage on magnolia scale. Continued monitoring of the scale population is critical to determine if treatments are needed in future years.