Major weather changes on the way during October

After unseasonably warm temperatures during much of October this year, an extended period of cool and unsettled weather is likely.

A persistent upper air ridging pattern across the Midwest during late September and early October of 2013 led to a prolonged period of mild weather and mostly favorable harvest conditions, with mean temperatures in Michigan since the beginning of the month running 4-6 degrees Fahrenheit above normal. During the past 24 hours, that upper air pattern has broken down and will eventually be replaced by a large troughing feature across the Great Lakes region (Figure 1). The trough will lead to northwesterly flow aloft and the passage of several Canadian-origin air masses into the central and eastern United States during the next week and possibly longer. 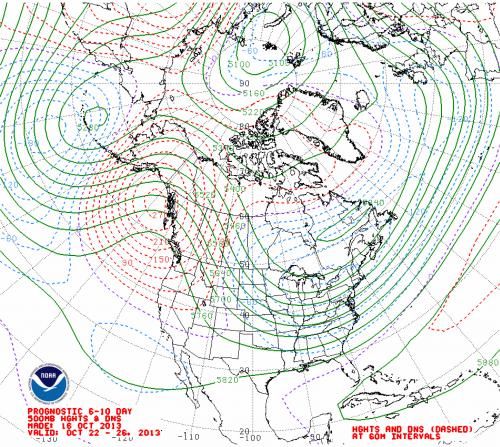 Collectively, this change suggests a prolonged period of cool, unsettled weather. While the potential influx of low level moisture from the Gulf of Mexico will be very limited with this pattern, the flow of cold air across the relatively warm waters of the Great Lakes (current water surface temperatures in Lake Superior generally range from the upper 40’s to mid 50s while those in Lakes Michigan and Huron range from the upper 50s to low 60s) will lead to a continuing threat of lake effect precipitation. You will note that I used the term “precipitation.” Given that air temperatures just above the surface will fall to near or slightly below freezing levels during the next several days, it is likely that some of the precipitation across at least far northern sections of the state will fall as snow, although no significant accumulations are expected. Lake effect rain showers are likely elsewhere.

In the short term, look for cool, mostly cloudy conditions with a continuing chance for showers each day through the weekend, Oct. 19-20. High temperatures will gradually fall back from values in the 50s to low 60s Friday (Oct. 18) to the 40s by late this weekend. Low temperatures will fall from the 40s Friday to the 30s by the weekend. Given subfreezing temperatures aloft, it is possible that some locations could see freezing nighttime temperatures, especially if relatively calm, clear conditions should develop; at this point, most nights are expected to be cloudy with at least some wind. Freezing temperatures will be most likely across northern sections of the state, although the threat will persist statewide through at least the middle of next week. Lake effect showers will be a good bet each day, especially in northern and western sections of the state. Rainfall totals in most cases are not expected to be heavy – generally less than 0.25 inches per day.

The NOAA Climate Prediction Center 6-10 day and 8-14 day outlooks, covering Oct. 22-26 and Oct. 24-30 respectively, strongly reflect the upper air pattern described above and both call for below normal mean temperatures and for above normal precipitation totals. Collectively, these outlooks suggest slow grain drydown rates and prolonged harvest and fall fieldwork delays during the next couple of weeks.

The new CPC 30-day outlook for November calls for further upper air pattern changes ahead with equal chances of below, near and above normal mean temperatures and precipitation totals for Michigan and the Great Lakes region. Further ahead, the outlooks call for milder than normal mean temperatures for the November through January period with no forecast direction on precipitation totals.

Online water use reporting must be completed by April 1