Growers can broadcast legume and brassica seeds in late winter to produce inexpensive cover, forage and fertility for years to come.

Frost seeding is the practice of broadcasting seed over frozen soil in late winter, relying on the spring freeze-thaw cycle to incorporate it, and hoping for weather conditions that allow the crop to germinate and grow. Only the hardiest plant species sporting thick seed coats can survive this harsh treatment. Therefore, legumes like clover, alfalfa and trefoil are the preferred candidates for frost seeding. Less commonly and with more variable results, brassicas such as mustard and rapeseed can also be planted in this way. March is frost seeding month for Michigan growers.

When managed properly, frost seeding is a simple and inexpensive way to establish a cover crop or improve a forage stand with minimal soil disturbance. Michigan field crop producers most commonly use this method to seed red clover into established winter wheat. Following wheat harvest, the clover is maintained as a cover crop holding the soil, suppressing weeds and yielding valuable forage.

As a legume, frost seeded red clover can also produce as much as 100 pounds per acre of organic nitrogen, and thus increase the yield of a subsequent corn crop by an average of eight bushels per acre (Figure 1). However, soil analysis following cover crop termination is always advisable to determine how much nitrogen a particular legume was actually able to contribute. 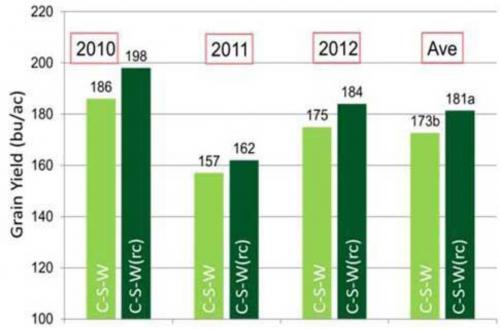 Michigan State University Extension recommends frost seeding clover into wheat using a broadcast spreader mounted on an ATV or light tractor. Both mammoth and intermediate red clover varieties can yield positive results. Ten to 12 pounds of freshly inoculated seed per acre is ideal if distributed evenly by making two passes, each at half the recommended rate. Seeding should be completed when the majority of snow cover has receded, but several freeze-thaw cycles are still likely, or approximately 45 days before green-up. The maple syrup season is a handy point of reference to consider when timing frost seeding operations.

If weed management measures applied the preceding fall were not successful, frost seeded legumes and brassicas will not be able to compete with the established weeds. This principle also applies when frost seeding into established forage stands. Grasses should be clipped or closely grazed in the fall to limit competition with young frost seeded plants in the spring. Seeding into a weedy field also severely limits the herbicides one can use to control broadleaf weeds in the spring. If broadcast into a relatively weed-free seedbed, however, legumes and brassicas can effectively suppress new weed growth. These cover crops also increase weed seed predation by creating late-season habitat for biocontrol agents like rodents and insects.

Because they tend to have less freeze-thaw motion and also dry quickly in the spring, sandy soils are less conducive to frost seeding. Legumes and brassicas should instead be drilled into sandy fields in April, once the soil has dried enough to tolerate wheel traffic. If soil is marginal, increased seeding rates can compensate somewhat for lower germination rates.

Once frost seeded cover crops are established, control and termination options must be considered. Research at MSU has shown that mowing or grazing a frost seeded clover stand in mid- to late August can increase overall biomass yield and provide a valuable source of forage. Brassicas, however, will not regrow much after mowing or grazing. When it comes time to terminate a cover crop, tillage or various labeled herbicides can be applied. Ideally, termination is completed 10 days prior to the planting of a spring crop, such as corn, to maximize the uptake of legume nitrogen. However, some growers prefer to kill cover crops in the fall to avoid complicating the spring planting season. Herbicide rotation restrictions must also be considered.

Frost seeding cover crops can be thought of as making a down payment on the coming growing season, an investment that can reduce fertilizer needs, improve cash crop yields and protect environmental quality.

For more information on frost seeding, contact James DeDecker at 989-225-3221 or dedecke5@msu.edu.