Make an effort to keep wildlife out of vegetable fields

While no one can exclude all wildlife from vegetable production fields, it is important that growers have a plan in place to minimize wildlife intrusions.

In recent years, stories about food borne illness have become more common in the popular press. At least a couple of the larger outbreaks reported in the press were later traced back to wildlife intrusions into fields or storages. These cases point out the need for growers to develop wildlife control strategies for their farms. While fields are not bank vaults and no one can keep all wildlife out of an outdoor food production area, having a plan in place to minimize intrusions is a good idea, whether you are being third party audited or not.

Plans should include a careful examination of each field for potential wildlife problems. A good plan does not need to cover the whole year. It should cover only the growing season with special emphasis on the last two weeks before harvest. Important things to note might include deer paths leading into fields, rodent burrows in or near the field, nearby nesting areas of larger birds such as Canadian geese or sand hill cranes near irrigation ponds. Once noted, a grower can develop a plan to discourage wildlife intrusions, sometimes called a wildlife mitigation plan. 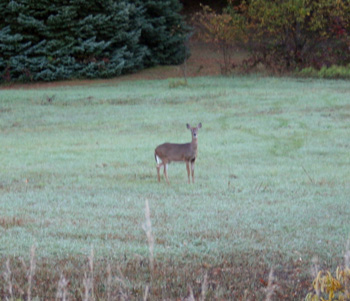 Deer are the most common form of wildlife encountered in fields. Deer fencing is often thought of as the ultimate mitigation plan, but even 8- or 10-ten foot fencing does not provide complete protection from deer, is often useless for small types of wildlife, and is very expensive. Smaller, temporary double fences with wires placed at a lower height and spaced several feet apart are also being tried in some areas. While no scientific study has been made of their effectiveness, growers who have tried these newer, much cheaper fencing systems seem satisfied with the results.

Once you have developed your mitigation strategy, it is important that you monitor fields for wildlife so that you know when to employ repellants, traps or other forms of exclusion. Regular monitoring is required for most third party audits, but it should at least be often enough that you see signs of incursions before wildlife transit patterns become well established.

While keeping wildlife from contaminating your crop is a worthy goal in and of itself, controlling wildlife has another side benefit. Keeping wildlife out of your fields often results in much less crop damage and can result in higher yields.