During the 2009 growing season there were multiple reports of low male flower formation in summer squash and other cucurbits. This resulted in significant losses in production due to poor fruit set. Most of the reports of low male flower formation were during the coolest part of the season and the situation generally returned to normal as more seasonal temperatures were observed. The 2009 season was extremely cool in Michigan, especially for warm season crops like cucurbits. Optimum temperature for summer squash growth is between 65 and 75oF. However, in 2009 average temperature at Hart (one of the major summer squash production regions in Michigan) remained below 65oF for 17 days in June during crop growth. In July, the first two weeks that coincided with flower formation stage in most fields registered only three days with average temperature above 65oF. The long term National Weather Service (NWS) station at Mears is calling for below normal temperatures for June through August for 2010 (Norm Myers code-a-phone as of May 24). This is still too early; however, it is critical to begin developing strategies to mitigate potential effect of cool weather on your summer squash.

Growers who planted multiple cultivars of summer squash in 2009 noticed that under cool conditions certain cultivars tended to sustain a higher number of male flower formation. It is known that under cool weather, female flowers will form first. For the above reason, it might be helpful in the future to mix the seed of the main cultivar with about 5 percent seed of another cultivar known to be an early cultivar (produce male flowers sooner) or to produce adequate male flowers during cool weather. This strategy is similar to that used for cucumber production with all female cultivars and can help ensure that adequate male flowers are available during pollination and fruit set.

A full version of this article will be published in the May or June issue of the Vegetable Growers News. 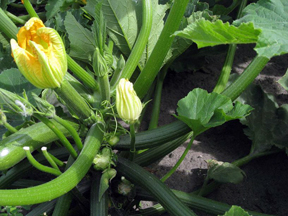