Although it has been dry, we may still see white mold if we continue to have moist conditions during flowering.

In partnership with the North Central Soybean Research Program and plant pathology colleagues from north central states, a PDF booklet called Management of White Mold in Soybean and iTunes podcasts are now available to assist with managing white mold in soybeans.

What is white mold?

White mold is a disease caused by a soil borne fungus, Sclerotinia sclerotiorum. Symptoms of infection include areas of wilting during late reproductive stages which are often visible in patches across the field. Severe infection will weaken the plant and result in lodging (Photo 1). Signs of the pathogen include the production of white-cottony mycelium (mold) and the production of sclerotia (Photo 2). Sclerotia are resting bodies of the fungus and may be produced inside or outside stems and pods and resemble mouse or rat droppings. These signs and symptoms of white mold allow it to be easily distinguished from the many other diseases of soybean. 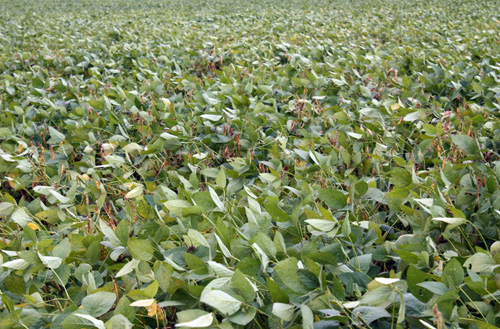 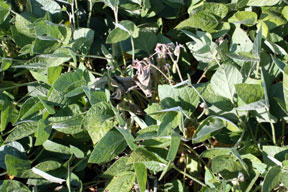 Photos 1 and 2. Patch of plants that have lodged due to white mold (left) and a single
plant exhibiting wilt symptoms (right).

White mold reduces yield by reducing the number and size of seed produced. Quality of seed can also be affected, sclerotia can be harvested with grain which may result in discounts at the elevator, and in some cases grain oil and protein concentrations can also be reduced. A general rule of thumb for estimating yield loss is that for every 10 percent incidence of white mold observed at the R7 growth stage between two to five bushels per acre will be lost.

The disease cycle of white mold is driven by environment, host and presence of the pathogen. The role of environment is very important on disease development. Sclerotia (resting bodies) overwinter in the soil and germinate under appropriate moisture and light conditions to produce distinctive apothecia (small mushrooms) (Photos 3-5). Spores released from apothecia typically infect the plant through flowers, and infection of flowers is favored by canopy closure during flowering (R1-R3), which creates a microclimate within the crop canopy. Factors that favor the occurrence of white mold include a high yield potential crop, field history of white mold, previous susceptible crops in the rotation, cultivar susceptibility, narrow row width, high plant populations, high soil moisture, high relative humidity and cool temperatures (less than 90 degrees Fahrenheit). 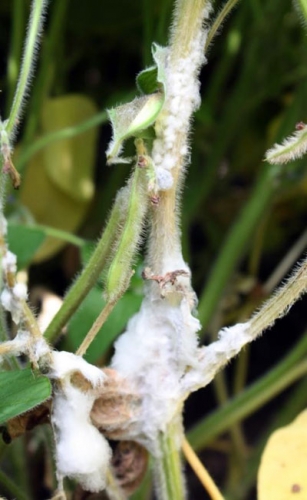 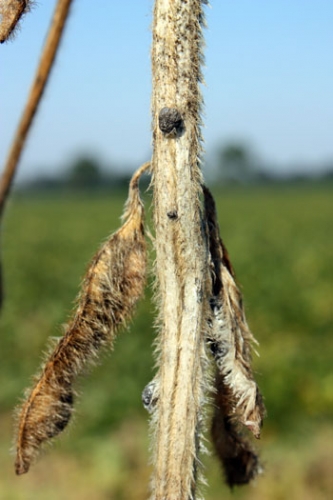 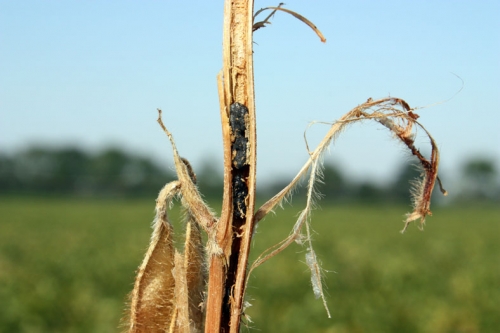 Long-term management should focus on reducing the number of sclerotia in the soil to reduce spore production and plant infection. White mold has a wide host range including soybeans, dry beans, potatoes, peas and cucumbers. Rotation into non-host crops such as small grains and cereals can help to reduce the sclerotia load in the soil, however sclerotia are capable of surviving for a number of years. Tillage also has an effect on white mold, with no-till systems generally having a lower risk of disease development. 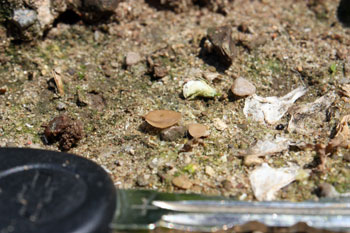 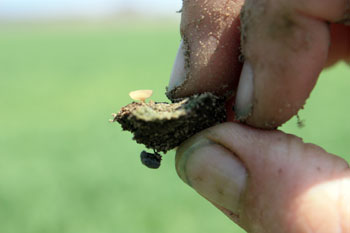 Chemical control options are available for the management of white mold, but do not result in 100 percent control. A number of foliar fungicides are available for white mold including Domark (tetraconazole), Endura (boscalid) and Topsin-M (thiophanate-methyl). When using chemical control options, pay particular attention to the label rate and application timing. Efficacy is a function of canopy penetration and application timing, which should be focused on early flowering stages up to R3. Value of the crop and history of disease should be used to determine if a fungicide application is warranted.

Conithyrium minitans sold as Contans® WG is a biological control agent; it is a fungus which parasitizes the white mold sclerotia, killing the sclerotia, thereby reducing the sclerotia load in the soil. Research is continuing at Michigan State University within the Hao laboratory on the application timing, quantity and duration of C. minitans survival within the soil for disease control.

If you are considering using Contans, appropriate application is essential; it is generally recommended that the product be incorporated into the top 2 inches of soil so that the Contans product has the best chance of coming into contact with and killing the white mold sclerotia.