Resistant varieties, weed management and timely planting can all result in limited problems from this occasional disease of small grains.

The first probable outbreaks of BYDV in the United States were noted over 100 years ago. The symptoms were not attributed to viral infection, but the relationship between the disease outbreak and the abundance of aphids present in the crop was documented. In 1951, California scientists J.W. Oswald and R.R. Houston determined that the epidemics in small grains were caused by a virus. They confirmed the disease was transmitted by aphids and that plants brushing against each other, or other forms of mechanical transmission, did not transmit the disease. Once an aphid has the BYDV virus, it cannot be cleaned out by feeding on plants.

This far north, aphids are few and far between in the fall, and winter kills them. No evidence of fall transmission of BYDV by aphids has been documented, and they do not overwinter here. Aphid control in small grains in Michigan should be considered only for direct damage from large numbers of aphids, not for virus control. The emphasis on spraying aphids in wheat comes from states further south where aphids actually overwinter and are active most of winter. Michigan State University Diagnostic Services has not had any plant samples positive for BYDV this year, and very few in the past few years. 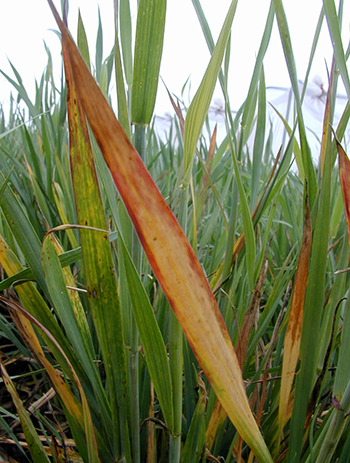 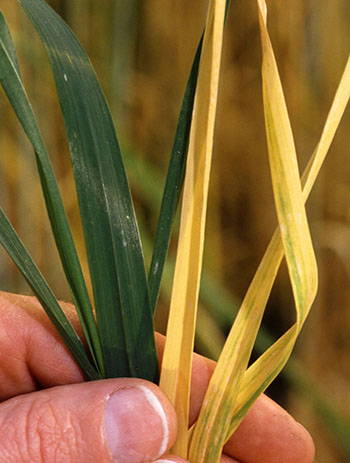 Accurate diagnosis is the first step in BYDV management. It is difficult to diagnose BYDV visually since symptoms can be similar to those caused by other disease or environmental factors. Several subgroups of the virus exist and are associated with certain aphid species. Two of the more common subgroups are BYDV-MAV and BYDV-PAV. The difference between these strains involves mostly which type of aphid transmits them to plants. The presence of aphids, leaf discoloration and stunted plants, either singly or in patches, points to a possible BYDV problem.

The diagnostic test most commonly used to confirm infection in small grains is the ELISA test, available through MSU Diagnostic Services. For a fee of $20, ELISA tests for MAV and PAV subgroups can be conducted. It is very important to collect and submit a sample properly. Your local Michigan State University Extension field crops educator can help you understand this process.

Once BYDV infection is confirmed, small grain growers can consider management practices to limit the problem in future years.

For more information on BYDV, visit the American Phytopathological Society webpage on  Barley Yellow Dwarf and “Yellow Dwarf of Wheat, Barley and Oats,” G1823 from the University of Nebraska-Lincoln Extension.