Managing bacterial canker in sweet cherries: What are the options?

While highly effective management strategies for bacterial canker are not available, the best tactics include using copper to reduce PSS populations during bloom prior to frosts and correctly-timed pruning.

The accompanying article, Bacterial canker, ice nucleation, frost injury and blossom blast in sweet cherries, described the biology of the bacterial canker pathogen Pseudomonas syringae pv. syringae (PSS) that contribute to blossom blast symptoms that took out huge percentages of sweet cherry flower clusters in Michigan in 2012. Besides blossom blast, there are many other symptoms of bacterial canker including fruit spots, leaf spots and shothole on leaves, dead buds, and branch and trunk cankers in some cases with associated gummosis (Photos 1-4). This article will focus on managing bacterial canker disease. 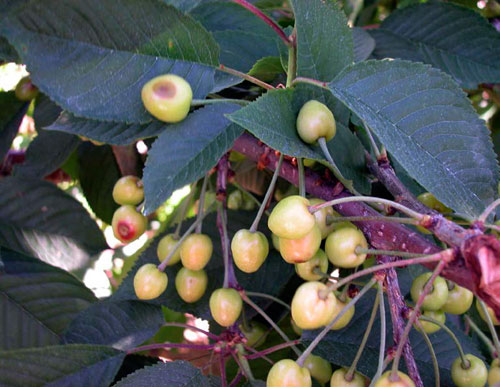 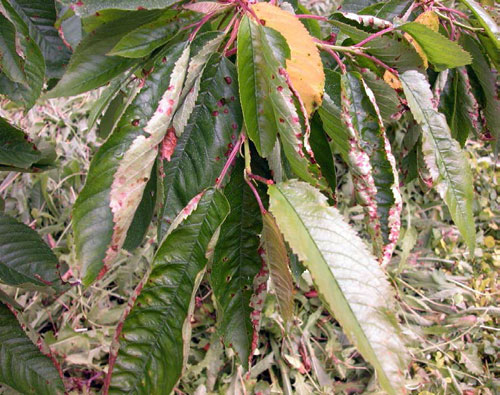 Photo 2. Leaf spotting and shotholes are common on leaf margins. 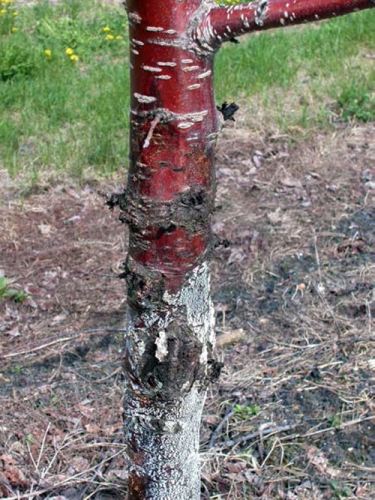 Photo 3. Sunken canker on trunk of tree, a common symptom of bacterial
canker on sweet cherries. 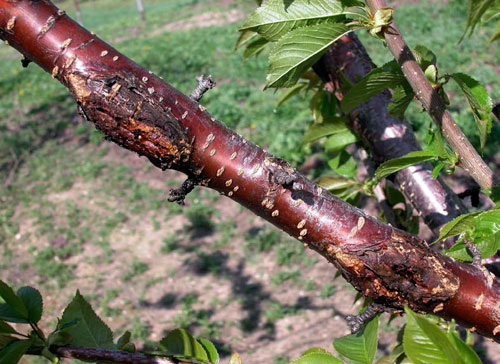 Managing bacterial canker is difficult due to the lack of availability of a highly-effective bactericide, the lack of disease resistance in most sweet cherry hosts and the ability of the pathogen to colonize and move systemically in the trees under optimal conditions.

Because of the association between PSS population in flowers, frost injury and the occurrence of blossom blast, reducing PSS cells during bloom is a top priority. Reducing cell numbers on flowers prior to a predicted freeze event of temperatures at or above 27 to 28 degrees Fahrenheit will significantly lower the risk of blossom blast. The only available bactericide for this purpose is copper.

To avoid issues with phytotoxicity, copper rates used are 25 to 35 percent of the dormant rate or about 0.5 to 0.7 pounds of metallic copper per acre and can be used up to the white bud or popcorn stage. One downside of copper use is that the disease’s control is short-lived.

In field experiments we performed at the Northwest Michigan Horticultural Research Station (NWMHRS), either copper hydroxide or copper sulfate applied at white bud kept PSS populations steady or reduced them slightly on flowers over the next four days after treatment as flowers opened on the tree. Within two days, the PSS populations then increased back to levels on unsprayed trees. We also found that temperature plays a critical role: if the temperatures fall to 26 F or below, copper will not effectively reduce PSS populations low enough to prevent ice nucleation and frost injury to flowers.

Copper can also be applied in early spring before trees break dormancy. At this timing, copper can be used at higher rates, up to 2 pounds of metallic copper per acre with 6 to 9 pounds of hydrated lime per acre. One or two applications at one week intervals can be applied before green tissue is visible. The idea of the dormant applications is for the copper to cover buds and existing cankers and persist on this tissue for a period of weeks. This copper can be solubilized and available as the PSS bacteria emerge from buds or cankers. However, if trees receive 2 to 3 inches of rainfall, the copper will be washed off.

Copper can also be applied in the fall during leaf drop. When leaves are falling, temperatures are typically cooler and these periods can also be windy and rainy. During this time of year, the PSS pathogen becomes active again in orchards and is disseminated to leaf scars. Following colonization of leaf scars, the PSS bacteria will migrate systemically to dormant buds. Leaf scars are only susceptible to infection for a period of about one to two days after the leaf defoliates. Copper applications (1.2 to 2 pounds metallic copper per acre) timed at about 25 to 35 percent leaf drop can be somewhat effective in preventing leaf scar application and reducing existing PSS populations in orchards.

The overall utility of this fall application is not clear because the pathogen is adept at growing and spreading during the spring. Thus, a hypothetical reduction of dormant bud colonization from 40 percent to around 10 percent may not yield a reduction in disease incidence the following season.

Finally, the efficacy of copper in reducing PSS is also impacted by copper resistance present in about 25 percent of the PSS population in Michigan. These resistant bacteria will not be controlled by copper used at any field rate.

Most of the sweet cherry cultivars grown in Michigan are susceptible or highly susceptible to bacterial canker. The only cultivar with an observable level of tolerance is Gold.

Timing of sweet cherry pruning can have an important impact on the subsequent occurrence of bacterial canker. Pruning should never be done during or immediately prior to wet weather. Pruning wounds are vulnerable to infection by PSS and the wounds allow the bacterium ready access to internal tissues of the tree. Summer pruning is also better than spring pruning from a disease management standpoint because the PSS pathogen becomes inactive following extended periods of warm temperatures in the mid-80s and higher and is also inactive during extended, warm, dry periods. There is an additional possibility that the tree is physiologically better able to withstand PSS infection during summer months. This research is currently underway at NWMHRS. Besides pruning for horticultural purposes, all visible cankers should be pruned out of the tree.

Research done at Cornell University in New York led byJulie Carroll and Terence Robinson showed that leaving a branch stub during pruning was an effective method of reducing canker infection due to slow progression of the PSS pathogen in the stubs. Also, the pathogen only rarely progressed from stubs into older wood. The use of either copper bactericides or phosphorous acid sprays immediately after pruning had minimal to no effect on infection of the stubs. Pruning after harvest during dry conditions provided the best results in terms of little to no infection and the least amount of canker progression into stubs.