Eliminating insect pests yet retaining beneficial natural enemies in your field can be challenging. Here are some tips on how to achieve this in cabbage.

In Michigan, there are numerous insect pests that feed on cabbage. For example, there are sporadic pests such as root maggots, thrips, aphids, flea beetles and cabbage loopers, and annual pests such as the imported cabbage worm and diamondback moth. Management strategies usually focus on the lepidopteran pests (loopers, imported cabbage worms and diamondback moths) as they are consistently present and have multiple generations per season. 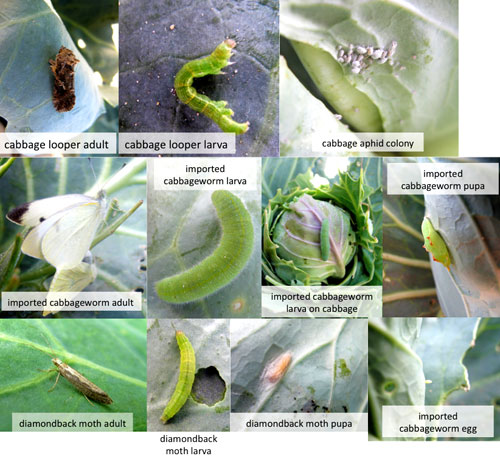 Natural enemies can contribute to pest control; however, broad-spectrum insecticides negatively impact beneficial insects. The use of selective insecticides can contribute to an increase in biological control efficiency; therefore, these two methods as recommended by Michigan State University Extension can be used simultaneously in an integrated pest management program to strengthen pest suppression.

The Michigan State University Vegetable Entomology Program tested four insecticide treatments and an untreated check (Table 1) for caterpillar control in cabbage. Baythroid XL was chosen as a disruptive product that was expected to negatively impact beneficial insects, and unlike other treatments, Baythroid XL was applied every two weeks throughout the growing season. The remaining treatments were designed to be rotations between low to moderately disruptive products that would be applied based on thresholds. However, low insect pressure resulted in only one of the treatments needing a second application during the season. Thresholds, measured in larval units, were calculated using the system presented in the 2010 Ohio Vegetable Production Guide (see page 115). Insecticides were applied using a single-nozzle hand-held boom (40 gallons per acre and 30 psi). All treatments were applied with a surfactant called Silwet L-77 at 0.25 percent v/v.

*all treatments were applied in conjunction with Silwet L-77 at 0.25 percent v/v

Figure 1. Impact of insecticide treatments on caterpillar numbers in a cabbage insecticide field-trial conducted by the MSU Vegetable Entomology Laboratory. All products were applied in conjunction with the surfactant Silwet L-77 at 0.25 percent v/v. Bars with the same letter are not significantly different (α= 0.05). 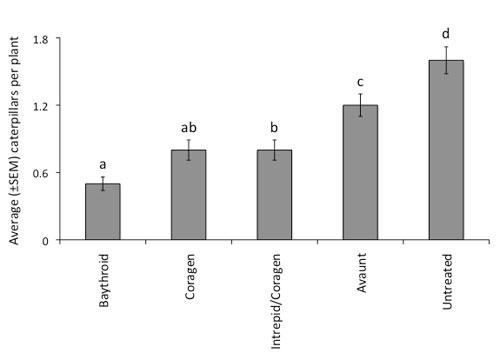 Figure 2. Impact of insecticide treatments on beneficial insect numbers in a cabbage insecticide field-trial conducted by the MSU vegetable entomology laboratory. All products were applied in conjunction with the surfactant Silwet L-77 at 0.25% v/v. Bars with the same letter are not significantly different (α= 0.05). 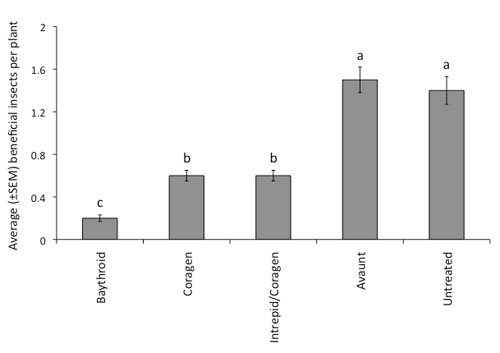 There were no differences between treatments for either the number of or weight of marketable cabbage. This could be due to the low caterpillar pressure, but it is also possible that increase in beneficial insects in untreated plots was able to keep pest pressure below economic threshold.