Wheat scab is difficult to prevent, but can be managed by understanding how it’s influenced and what your control options are.

Fusarium head blight, commonly called scab, is caused by fungi in the genus Fusarium. It is the single most important disease of wheat and one of the most difficult to prevent. The disease can cause spikelets to appear bleached. Severely infected kernels tend to be shriveled, light weight and, sometimes, chalky white or pink in color. Fusarium head blight is capable of causing some loss in grain yield, but the most significant financial losses stem from a mycotoxin created by the fungus within the infected grain called deoxynivalenol (DON or vomitoxin). More information can be found at the Scab Smart Management website. 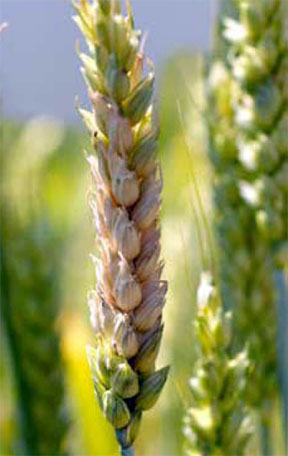 Weather has the greatest influence on disease development. Damp conditions and moderately warm temperatures at the time of flowering are most advantageous to the pathogen. However, it may also be favored by wet weather several days prior to flowering as it encourages spore numbers and dissemination. Likewise, wet conditions following flowering can compound the problem as it favors both disease development and the production of DON. Use the Fusarium Head Blight Risk Assessment Tool to access a risk model based on local weather, and sign-up to receive in-season scab alerts.

Crop rotations matter, as residues from the previously infected crop can harbor the Fusarium that causes Fusarium head blight. Residues that represent the greatest risk are those from corn, followed by wheat and barley. Hay sods can also pose a significant risk based on industry experience in Michigan. Using tillage to incorporate infected residues will reduce disease risk, but will not completely mitigate the threat that these rotations pose.

Fungicide use can reduce the severity of Fusarium head blight by as much as 50 percent and DON levels by 30 to 40 percent, though the actual reductions are highly variable. Growers and researchers have also found that fungicides targeting Fusarium head blight may result in improved grain quality and yield, even where Fusarium head blight does not develop. This is attributed to the fungicides’ contribution to the control of leaf diseases that often threaten the upper plant canopy. 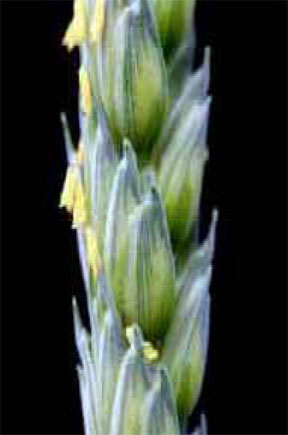 Wheat is considered to be flowering when one or more anthers are visible.  Flowering generally follows heading by just a few days.

Successful applications of fungicides against Fusarium head blight depend on the use of the following factors.

Recommended fungicides (Table 1).To date, the most effective products are Prosaro and Caramba. Folicur, and other brands of tebuconazole, is less effective on Fusarium head blight but, because of lower cost, might be considered where the risk of Fusarium head blight is relatively low and the threat of foliar diseases persists.

Proper application timing. Applications should be made while the wheat heads are in the early stages of flowering, when anthers can be seen on 25 to 50 percent of heads. This level of flowering usually occurs, depending on air temperatures, one to four days after the majority of the heads have fully emerged.

Application adjustments. For best results, the boom height should be adjusted upward to target the wheat heads; flat fan nozzles should be angled forward 30 degrees from horizontal (Where ground speed is below six miles per hour, nozzles can be alternately directed forward and backward.); use nozzles and pressure that provide a droplet size between the “fine” and “medium” categories (275 to 350 microns); and the sprayer should be calibrated to deliver 10 to 20 gallons of volume per acre.

1 Efficacy categories: NR=Not Recommended; P=Poor; F=Fair; G=Good; VG=Very Good; E=Excellent.
2 Insufficient data to make statement about efficacy of this product
3 Multiple generic products containing tebuconazole may also be labeled in some states. These products include: Embrace, Monsoon, Muscle 3.6 F, Onset, Orius 3.6 F, Tebucon 3.6 F, Tebustar 3.6 F, Tebuzol 3.6 F, Tegrol, and Toledo
4 Estimates of fungicide efficacy against stem rust are based on a small number of observations, and may be less reliable than the ratings for other diseases.

This information is provided only as a guide. It is the responsibility of the pesticide applicator by law to read and follow all current label directions. No endorsement is intended for products listed, nor is criticism meant for products not listed.

Wheat harvest: Make sure to calibrate your yield monitor