Managing hop downy mildew early in the season is critical

Downy mildew is caused by a fungus called Pseudoperonospora humuli and can cause significant yield and quality losses in hop depending on variety and disease pressure. In extreme cases, cones can become infected and the crown may die. Mild temperatures of 60-70 degrees Fahrenheit and regular rainfall during the growing season in Michigan provides ideal growth conditions for the fungus. Downy mildew is the most notable disease of hop production in Michigan at this time.

Downy mildew appears early in the season on emerging basal spikes. Spikes growing from infected crowns or buds may appear distorted with shortened internodes that give them a stunted appearance. Infected leaves may develop angular, water-soaked lesions that follow leaf venation. Eventually, the water-soaked lesions turn brown and necrotic with fuzzy and gray-black asexual spore masses developing on the underside of infected lesions.

As bines continue to expand, new tissue becomes infected and may fail to climb the string. Growers can attempt to retrain new shoots, but often incur yield loss as a result. As the season progresses, symptoms may include stunted side-arm growth, tip die-back and cone discoloration. The fuzzy, visible growth of downy mildew is not always present and should not be relied upon as the sole indicator of whether infection is present. 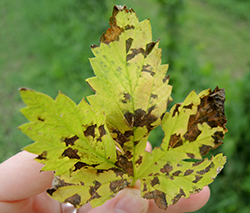 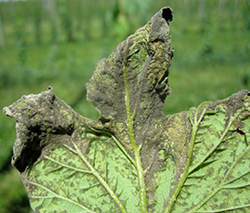 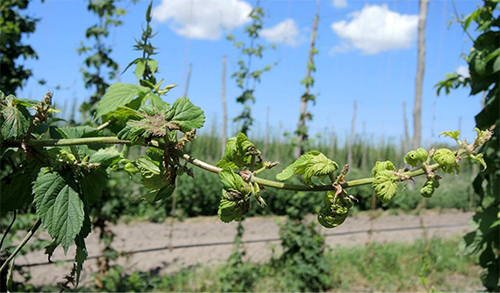 The causal agent of downy mildew, Pseudoperonospora humuli, overwinters in dormant buds or crowns and may move into the basal spikes as shoots expand in the spring. Infected crowns can produce uninfected shoots as well. The pathogen produces copious spores on the underside of infected leaves which infect new tissue through the stomata.

Buds, growing points, cones and leaves are all susceptible to infection. Leaf infections produce a second source of spores which can infect all parts of the plant, but is susceptible to desiccation under dry conditions. Infections occurring on the terminal growing point become systemic and can also produce spores, further contributing to the spread of infection. Once the fungus has become systemic, it grows down the plant toward the crown and can then persist in the buds and crown for a prolonged period. The fungus can also produce a resting spore and overwinter, but it is unclear how substantially these resting spores contribute to infection and how readily they are produced under Michigan conditions.

Infection is favored by mild to warm temperatures of 60-70 F when free moisture is present for at least 1.5 hours, although leaf infection can occur at temperatures as low as 41 F when wetness persists for 24 hours or longer.

Life cycle of Pseudoperonospora humuli on hop. Prepared by V. Brewster, Compendium of Hop Diseases and Pests. Click on image to download a PDF of a larger version.

Scouting and monitoring for downy mildew is a critical step in determining if intervention is warranted and whether or not previous management practices have been effective. Scouting is often critical to the proper selection and timing of management strategies. Scouting for downy mildew involves monitoring the crop for signs and symptoms of disease. Growers should keep records of their scouting, including maps of their fields, a record of sampling and disease pressure, as well as the control measures utilized. Scouting for downy mildew should begin as soon as plants begin to grow and should continue until the crop is dormant.

Section your farm off into manageable portions based on location, size and variety and scout these areas separately. It is more practical to deal with blocks that are five acres or smaller and contain plants of the same variety, age and spacing. Walk diagonally across the yard when scouting to ensure you view plants from both the edge and inner portion of the block. Change the path you walk each time you scout to inspect new areas. Reexamine hotpots where you have historically encountered high downy mildew pressure. Weekly scouting is recommended by Michigan State University Extension.

Unfortunately, even when we follow best management practices, downy mildew can gain a foothold in Michigan yards due to high disease pressure, poor fungicide timing, suboptimal spray coverage, fungicide wash-off, cultivar susceptibility or a combination of factors. In addition, fungicide resistance may play a role in some cases. Refer to “Pesticides registered for use on hops in Michigan 2015” for more information.

Cultural practices. It takes a multipronged approach to manage for downy mildew. Growers should utilize a protectant fungicide management strategy to mitigate the risks of early and severe infections, but can also utilize cultural practices to reduce disease. Keep in mind varieties vary widely in their susceptibility to downy mildew and select the more tolerant varieties when possible (refer to Table 2 in “Field Guide for Integrated Pest Management in Hops”).

Clean planting materials should be used when establishing new hopyards since this disease is readily spread via nursery stock. Growers should consider purchasing a few plants from prospective nurseries and have them tested for downy mildew before committing to a large numbers of plants, particularly if the grower hasn’t worked with the nursery before.

If disease is already present in the yard, diseased shoots and spikes should be removed by hand and healthy shoots retrained in their place. Remove superfluous basal foliage and lower leaves to promote air movement in the canopy and reduce the duration of wetting periods. If there is a cover crop, it should be mowed close to the ground. If yards have no cover crop, cultivation can help dry the soil and minimize humidity. Keep nitrogen applications moderate.

Protectant treatments. Apply fungicide treatments on a protectant basis as soon as bines emerge in the spring regardless of the presence or absence of visible symptoms of downy mildew. Dormant applications are not recommended. Applications should continue season long on a 7-10 day reapplication interval until harvest. The time between applications may stretch longer when the weather is dry and if hopyards don’t have active infections. Several periods in the season are particularly critical for disease control:

Covering young, developing bracts before cones close up is critical to protecting against downy mildew when conditions for disease are favorable. Getting adequate coverage on undersides of bracts where infection occurs becomes increasingly difficult as cones mature.

Efficacy research performed in the Pacific Northwest and reported by USDA recommends the following fungicides as protectants against downy mildew:

Strobilurin compounds such as Flint (trifloxystrobin) and Pristine (strobilurin+boscalid) will only provide suppression of downy mildew when used for powdery mildew control.

Post-infection treatments. If needed, growers should be prepared to apply post-infection treatments. Research from the Pacific Northwest indicate that cymoxanil (e.g., Curzate) has about two days post-infection activity, but only provides three days of forward protection. This means that cymoxanil would make a great treatment if you failed to get a protectant on ahead of a rain event, but would require the grower to tank-mix it with a protectant fungicide with a longer residual for protection moving into the period following application.

The product Tanos is a combination of cymoxanil – the active ingredient in Curzate – and a protectant mode of action called famoxadone and would be a nice choice for growers looking for some curative action as well as five to seven days protection. Curzate and Tanos have a seven-day pre-harvest interval. Dimethomorph (e.g., Forum) and mandipropamid (e.g., Revus) have the same mode of action and offer seven days of protectant activity and one to two days of post-infection activity on actively growing shoots. Forum and Revus have a seven-day pre-harvest interval.

Phosphorous acid fungicides (e.g., Phostrol) have been shown to provide about four to five days protection and post-infection activity of up to five to seven days in field trials in the Pacific Northwest and have a very short pre-harvest interval. The strobilurin fungicides including trifloxystrobin (e.g., Flint) and pyraclostrobin/boscalid (e.g., Pristine) have less post-infection activity and are not recommended for downy mildew at this time.

Organic treatments. Organic growers have fewer options and will need to focus on keeping tissue protected, selecting downy mildew-tolerant varieties and following cultural practices to limit downy mildew infection. Copper-based products are the mainstay of downy mildew management in organic hopyards and offer five to seven days of protection, but no post-infection activity. The pre-harvest intervals for copper formulations vary, so refer to the label.

Actinovate, Eco-mate, Armicarb-O and Sonata are additional products that list downy mildew on the label and are approved for organic use in hops. The pre-harvest interval for these products are one day or less. At this time we have no data on the efficacy of these products.

Want to receive more pest management information for hops this season? Sign up to receive the Michigan State University Extension Digest sent via email, or follow us on the MSU Hop News Facebook page.