Managing Japanese beetles in chestnuts for 2013

The 2012 season saw high populations of Japanese beetles in some Michigan orchards and growers will need to prepare to combat this potentially damaging pest in the coming season.

Japanese beetle adults are considered a generalist pest and affect many crops found on or near grassy areas, particularly irrigated turf. Japanese beetle grubs feed on grass roots in early spring and again in the fall and can cause significant damage to turf. Larvae prefer moist soil conditions and do not survive prolonged periods of drought. Given the intense dry season Michigan experienced in 2012, we can expect to see lower Japanese beetle populations during the 2013 season.

Adult Japanese beetles (Photo 1) emerge in early July and feed on hundreds of different plant species. Adult beetles feed on the top surface of leaves, skeletonizing the tissue (Photo 2). If populations are high, they can remove all of the green leaf material from the plants. 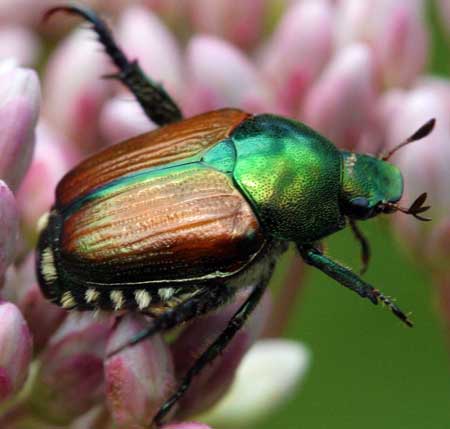 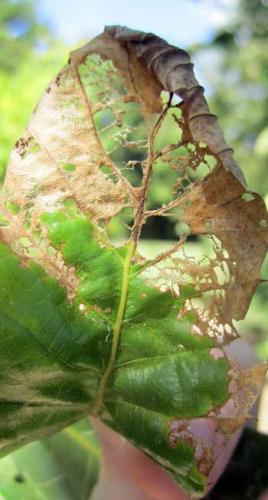 Japanese beetle adults are a substantial insect and measure 3/8 to 1/2 inch long. The thorax is green and wing covers are copper-colored. There are five tufts of white hairs on both sides of the abdomen and a pair of tufts on the end of the abdomen that can help distinguish the Japanese beetle from other look-alike species. The legs and head are black. 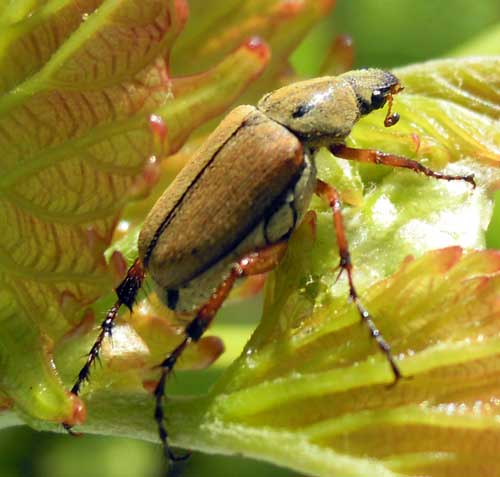 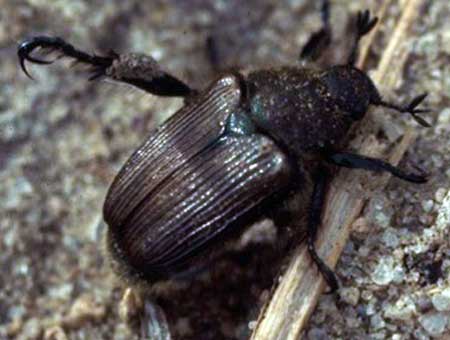 Visual observation of adults or feeding damage is an effective scouting technique. Growers should scout along a transect through orchards at least weekly until detection, paying special attention to the tops of trees. Because of their aggregating behavior, they tend to be found in larger groups and are typically relatively easy to spot. Pheromone and floral-baited traps are available and potentially can help indicate the arrival of adults and help estimate the potential pest pressure, but are not considered effective for trapping out Japanese beetles. Growers considering the traps should remember that they may attract Japanese beetle adults from the surrounding area and contribute to damage.

There are no established treatment thresholds or data on how much Japanese beetle damage a healthy chestnut tree can sustain, but growers should consider that well-established and vigorous orchards will likely not require 100 percent protection. Younger orchards with limited leaf area will need to be managed more aggressively. Managing Japanese beetles can be a frustrating endeavor as they often re-infest from surrounding areas, especially during peak adult emergence in July. This re-infestation is often misinterpreted as an insecticide failure, but efficacy trials have shown that a number of insecticides remain effective treatment options.

Carbamate (carbaryl) insecticides can provide immediate knockdown and seven days of residual activity against Japanese beetle adults. Organophosphates (malathion and phosmet) can take longer to take effect (up to three days), but provide 10 to 14 days of residual control. Pyrethroids (bifenthrin, beta-cyfluthrin, cyfluthrin, gamma-cyhalothrin, lambdacyhalothrin, pyrethrins, zeta-cypermethrin, deltamethrin and fenpropathrin) have good knockdown activity and seven to 10 days of residual control, but can be a concern in orchards where mites are a concern. Pyrethroid use has been shown to flare mite populations as a result of their toxicity to predatory mites, which help keep pest mite populations in check.

Neonicitonoids (imidacloprid, thiamethoxam, acetamiprid and clothianidin) act initially as a contact poison for two to five days and then have a longer residual period of plant protection during which they have anti-feedant effects on adult beetles. OMRI-approved organic options include neem-based products (azadirachtin) that have a one- to two-day residual and good knockdown activity, as well as Surround (kaolin clay) which has had good results in blueberries and grapes and acts as a physical barrier and irritant.