View the different control methods and insecticide, including organic, options for minimizing Japanese beetles on your farm.

Japanese beetles have only one generation per year, but these beetles emerge over a long period from late June through August and they live for over 30 days. They feed on the foliage and fruit of various fruit crops grown in Michigan, causing damage to the plant and increasing the risk of fungal diseases. Their emergence during mid-summer can also result in their presence during harvest of some fruit crops, creating a risk of contamination. They are also highly mobile insects and can fly into fields from surrounding areas. This article provides information on insecticide options based on tests over the past few years conducted at the Trevor Nichols Research Complex and at grower’s farms.

Many farms have sodded row middles and perimeters around fields, with irrigation being broadcast during the summer months. This is done for good farm management reasons, but it also creates ideal conditions for Japanese beetles to lay eggs since they prefer to lay eggs in mown grass and in moist soil. While it may not make sense to do this in all farm situations, removing the grass or using a non-grass cover crop in row middles, or restricting irrigation to the crop row through a drip system are all approaches to reduce the suitability of sites for reproduction of this pest. 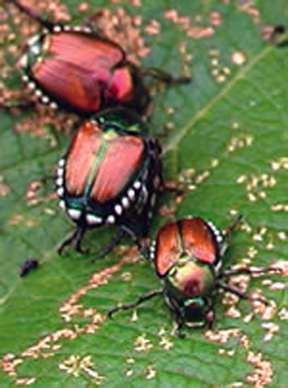 Certain weeds are another magnet for Japanese beetles. Beetles are much more abundant in crop fields where there is poor control of wild raspberry, blackberry, Virginia creeper, wild grape or sassafras. These weeds are highly attractive and beetles will aggregate on these plants and then lay eggs in the soil nearby. Plan now for a fall application of herbicide to control these plants and reduce the attractiveness of your fields.

While growers select their fruit crop cultivars based on many criteria other than insect susceptibility, there are some cultivars of apple, blueberry and raspberry that are highly attractive to Japanese beetles and are more likely to have feeding injury. These include Honeycrisp apples, Bluecrop blueberries and Chinook and Heritage raspberries. However, it is difficult to generalize about this issue of susceptibility because Japanese beetles will select the most susceptible of the cultivars available in a field. So, a low-ranked cultivar could be attacked more if it is the most attractive of the cultivars present.

A recent trend in fruit production is the increasing use of high tunnels to protect fruit from rain. We have also observed that this approach to fruit growing can significantly reduce the activity of Japanese beetles on fruit. While they may move into plantings at the end of tunnels where there is direct sunlight, densities are much lower compared with plantings out in full sunlight.

A few thoughts about trapping

Traps are sold widely for Japanese beetle monitoring and control. However, these insects are very easy to see so they can be monitored by looking directly at the crop – you will know when they are present from the feeding damage and by seeing the beetles. Traps are highly attractive and draw beetles to them over large distances, so putting a trap near your crop fields will draw beetles from the surrounding landscape.

Many of the attracted female beetles do not get trapped and end up landing on foliage nearby and feeding or mating then laying eggs in the soil near the trap, so this creates a hot-spot for next season. Mass trapping of beetles is also not economically feasible in commercial fruit plantings and there is little evidence that this strategy will work to reduce beetle populations and crop injury. The take-home message is that traps should be avoided because they will not help reduce Japanese beetle damage in fruit crops.

The carbamates Sevin and Lannate provide immediate control of beetles present during the application. They are also stomach poisons, so if beetles eat treated foliage they will also receive a higher dose. This can be a good property for control of Japanese beetles since they eat so much that a strong dose of insecticide is taken up. Lannate has a short residual activity of a few days, whereas Sevin provides a week or more of protection. Sevin has a three- or seven-day pre-harvest interval (PHI), depending on the crop, and Lannate ranges from 3- to 14-days.

The organophosphates Guthion and Imidan (buffer Imidan to pH 6.0 in the spray tank) both provide excellent lethal activity on adult beetles, although it can take a few days for their effects on Japanese beetles to be seen as the beetles take up the insecticide. If considering Guthion, beware of the 2011 restrictions on the total amount of this insecticide allowed this season as part of the EPA phase-out – see the label for details. These organophosphates provide 10 to 14 days of activity, with a 3- to 21-day PHI, depending on the crop.

The pyrethroids Danitol, Asana, Brigade, Baythroid, Mustang Max, Warrior and Capture give instant knockdown and mortality of adult beetles, with 7 to 10 days of activity. Beetles that do not receive a lethal dose of pyrethroid may also be repelled from treated fields, providing an additional mode for reducing infestation of crops at harvest. PHI’s for pyrethroid insecticides vary from 1 to 14 days and can be different in different crops, so check the label before use or consult the table at the back of the 2011 edition of the MSU Fruit Management Guide to compare PHI’s.

The labeling of the neonicotinoids Provado, Actara, Assail, Belay, Scorpion and Clutch for use in some fruit crops provides selective options for Japanese beetle management. These insecticides provide two to five days of lethal activity from the surface residues before being absorbed into the foliage. Thereafter, beetles must eat treated foliage to get a dose of the insecticide. Once inside the foliage, these locally-systemic insecticides are rainfast and provide repellency and knockdown activity, but with much less direct mortality from the residues. These neonicotinoids will also provide some control over aphids and leafhoppers. The rate of these insecticides allowed in different crops will have a large impact on their effectiveness, and growers should consider the higher end of the rate range to achieve some lasting control of Japanese beetles. Most labels will provide guidance on the rate that is appropriate for control of this pest.

Avaunt is now labeled for use in grapes with Japanese beetle, grape berry moths and leafhoppers (suppression only) on the label. Pre-mixed insecticides such as Voliam Flexi may contain one active ingredient targeting moth pests and another that is active on Japanese beetles. In the case of this insecticides, the same active ingredient as Actara is present in Voliam Flexi to provide some control of beetle feeding. It is prudent to examine the rates of each active ingredient in these pre-mixes to determine whether a pre-mix is right for your insect pest control needs.

For growers looking for beetle control immediately before harvest or in organically grown fruit crops, some selective insecticides with zero day PHI’s can provide a tool to repel beetles and help achieve beetle-free fruit during harvest. Compounds containing neem (Azadirect, Neemix) have a zero-day PHI and pyrethrum (Pyganic) has a 12-hour PHI. These compounds are labeled for organic use, and have a short but effective impact on adult Japanese beetles with some mortality, some knockdown off the crop and some repellent activity.

Typically, there is only one to two days of activity against beetles because the residues do not remain active for long. The non-organic form of Pyganic, called Evergreen, also has a 12-hour PHI and is much more effective against Japanese beetle than Pyganic due to the addition of a chemical that inhibits the beetle’s ability to break down the insecticide. A final option for protection against Japanese beetle is SURROUND WP, a white clay material applied to create a white coating on the surface of foliage and fruit to provide protection against insects. When applied to provide a good coating (typically requiring two or more applications), SURROUND has performed very well against Japanese beetles in trials conducted in blueberry and grape. If considering this approach to Japanese beetle control, be aware that the white coating on the fruit may require some removal after harvest to make the fruit marketable. This may be challenging for some types of fruit. For example, in blueberries, the white residue was removed well from the surface during processing, but deposits in the calyx cup were not removed even after running berries through a typical wet processing line with food grade detergents.

Japanese beetles typically lay their eggs in moist, grassy areas and many fruit farms have a large amount of this highly suitable habitat. An additional approach to reducing the impact of Japanese beetles in a farm is to reduce the overall population by targeting the grub stage of this pest to reduce the abundance of beetles in the following year. If the location of high grub densities near fruit fields is known, these areas could be treated with a soil insecticide to get maximum return on this treatment. Our experience in Michigan blueberry fields has been that application of Admire (16 oz/acre) to grassy field perimeters in late June and early July reduced the abundance of beetles on bushes for the first few weeks of their flight period in the next growing season. After that, beetles flying into the area from outside swamped out this effect, so there is only a short-lived benefit from targeting the grubs in fields surrounded by infested grassy areas. However, as part of an overall IPM program to minimize the impact of Japanese beetles, this approach can help reduce the number of beetles growers must control. Platinum is another soil-applied insecticide that can be used for this grub-control strategy.

The work of Dr. Isaacs and Dr. Wise is funded in part by MSU's AgBioResearch.