Most fresh market vegetable growers are currently laying plastic mulches in preparation for the main season. While plastic mulch presents multiple benefits, it is also important to know that inappropriate selection and management of plastic mulch may result in crop damage or loss in revenue.

Benefits of plastic mulches are multiple and include

Choosing the right plastic mulch for your operation

Plastic mulches are either slick with a smooth surface or embossed with a diamond-shaped pattern on the surface. Embossed films are preferred because they have reduced expansion and contraction under fluctuating temperatures, which can loosen plastic from the bed. Plastic mulches range in thickness (gauges) from 0.6 to 2.0 mils (0.0152 to 0.0508 mm). The cost and weight of the roll increases with thickness, but a 1 mil gauge thickness would be appropriate for most vegetables. The color of plastic mulch as well as light transmission and reflection affects soil temperature and weed infestation. Plastics are available in several colors, but black has so far been the major mulch used in agriculture, especially in regions with a temperate climate. 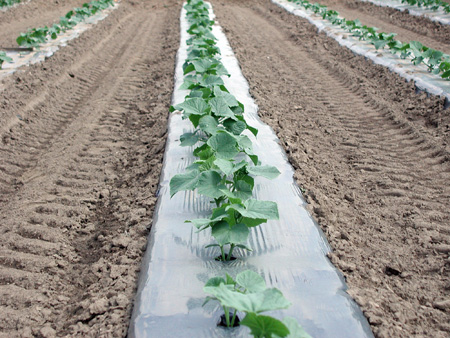 Clear plastics transmit 85 to 95 percent of the incident solar radiation, resulting in the greatest soil temperature. Because they create a greenhouse effect, they are usually associated with weed problems. Use of clear plastic should be combined with an adequate weed management program. With black plastics, solar radiation is first absorbed by the plastic and then transferred to the soil as heat. Efficiency of black plastic mulches at increasing soil temperature is slightly less than clear mulches. However, because no light is transmitted, weed control is generally excellent with black plastic. White and white-on-black plastics maintain cooler temperatures and are normally used in hot environments (tropical climate) to decrease soil temperature by reflecting most of the incident solar radiation. The level of weed control depends on the opacity of the white film. Colored mulches (red, green, yellow, silver, etc.) have been tested in Michigan for tomato production but did not provide significant advantages over the standard black mulch.

Laying the mulch for optimum performance and minimum risk

A loose plastic is a serious threat to the crop, especially to young transplants because they are fragile. As indicated earlier, black mulches allow little light to pass through. They first absorb the light, which is then converted into heat. The heat is finally transferred to the soil. For greatest efficiency, it is critical to have close contact between plastic and soil. On a clear and sunny day, the black mulch surface temperature can exceed 130°F. This could result in injury or desiccation of most plant parts, such as root, stem, leaves, and fruits, in direct contact with the mulch. Crop injury can also occur even if the crop is not in direct contact with hot plastic mulch. During a sunny day, hot air builds up between the plastic and the soil. Therefore, if the plastic is loose, its flapping (even under a light wind) creates movement of hot air and funnels it through crop holes. This causes stem girdling and transplant desiccation, a problem commonly observed with young pepper transplants. Such plants become very susceptible to wind damage and should be staked and tied as early as possible. To avoid all those problems keep your plastic mulch tight on the bed.

Dr. Ngouajio's work is funded in part by MSU's AgBioResearch

Grow It, Try It, Like It at Madison Early Childhood Center Session 5

Grow It, Try It, Like It at Madison ECC Session 4

Grow It, Try It, Like It at Madison ECC Session 1

Grow It, Try It, Like It at Madison ECC Session 2

Grow It, Try It, Like It at Madison ECC Session 5