Managing root rot on celery seedlings in the greenhouse

Michigan ranks as the number two producer of celery in the U.S., an industry valued at $18.9 million for the state. Commercial celery production begins with greenhouse transplants grown in plug trays using peat-based growing media. Root rot most often occurs at the greenhouse seedling stage, although field plants may also become affected and show symptoms.

As an industry, root rot is one of the disease problems that celery growers must manage each year. Root rot can be a sporadic or chronic problem for individual growers depending on their adoption and implementation of an integrated management approach. The microscopic, soilborne pathogens responsible for root rot initially attack celery seedlings during greenhouse production, but can linger in the field, occasionally causing severe production losses. More commonly, diseased celery plugs produced in the greenhouse can lead to loss of plant vigor and growth resulting in an uneven plant stand (Photo 1). To address this, my lab has been working with the celery industry to develop management strategies for growing healthy greenhouse celery transplants to ensure robust field production.

The culprit primarily responsible for root rot is a soilborne water mold called Pythium. Some Pythium species can cause serious disease on vegetable seedlings, resulting in damping off, root rot, plant stunting, poor plant quality and field establishment, and plant death. Our recent research efforts found that several different types of Pythium may be found in greenhouses where celery seedlings are grown as plug plants for field establishment (Photos 2-4). We observed that the celery seedling roots may show brown lesions and the feeder roots could become rotted and eventually slough off (Photos 2-4). 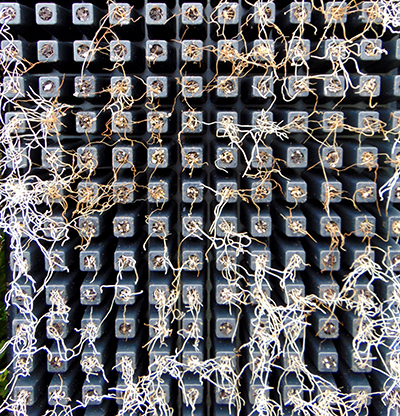 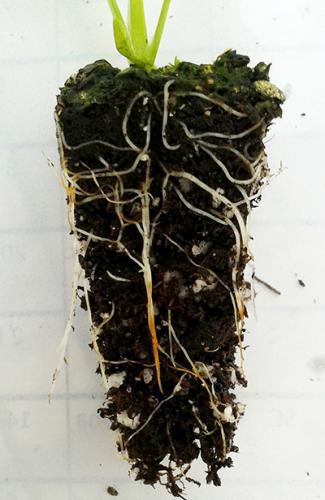 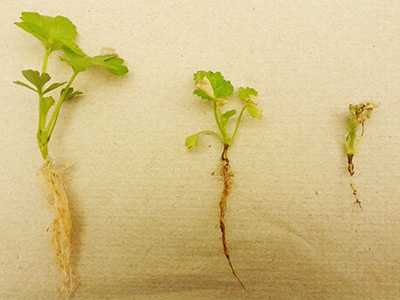 Pythium can be introduced into the greenhouse growing area via contaminated plant benches, reused plug sheets and flats, the introduction of field soil on shoes and equipment, and using contaminated water from a holding pond or a reservoir tank. Pythium is called a water mold as many species can release mobile spores in water or saturated soil that can swim to a healthy plant root to begin a new infection. Pythium can easily survive in plant roots (dead or alive) or soil including that occurring on greenhouse walkways or in the head house areas. Of particular importance are the root fragments and soil particles that can cling to used plug trays and flats as they can harbor Pythium spp. that remain dormant until favorable environmental conditions and introduction to new plants spur germination and root infection.

Sanitation is the foundation of good greenhouse management that can effectively reduce Pythium and prevent root rot on celery seedlings. Michigan State University Extension suggests removing all plant debris from greenhouse benches and floors to prevent carryover of Pythium between crops. Keep walkways, benches and equipment clean of soil. After cleaning the greenhouse, treat all benches and walkways with a disinfestant between crops. Disinfest all equipment used in the operation, such as flat fillers, irrigation equipment and used pots and flats by steaming or using disinfestants.

Always clean items before treating with a disinfestant. One option for disinfesting is to soak items in 10 percent chlorine bleach for 30 minutes. Prepare the bleach solution just before use and replenish after two hours to ensure effective oxidizing power of the bleach solution. A second option is to soak items in a hydrogen dioxide (e.g., ZeroTol) solution. Research has shown that the high labeled rate (2.5 fluid ounces per gallon water) is needed. The more organic matter present, the faster the oxidizing agent is exhausted. Quaternary ammonium chloride salts (e.g., Green-Shield, Physan 20) are a third option. These products are stable in solution. Soak items for 20 minutes, and prepare fresh solutions daily. Note: Disinfestants are regulated as pesticides. Contact your state regulatory agency if you have questions concerning the labeled uses.

Used pots, flats, flat fillers, bench tops and potting areas should be a priority for cleaning as they represent some of the places where soil and plant debris contaminated with Pythium may be found. Also, keep in mind that greenhouse personnel may unknowingly transport Pythium-contaminated soil particles from walkways and floors throughout production areas. If hoses and water breakers touch the floor and then are placed on the plant benches, contaminated soil can be readily moved from the floor to the plant growing area. It is strongly recommended to dispose of pots from diseased plants and not to reuse them. Use clean growing medium such as steam-treated soil or bagged soilless media. Steam sterilize the medium at 180 degrees Fahrenheit for 30 minutes. The heat must be uniform and sustained, and recontamination must be avoided.

A MSU greenhouse trial tested fungicide drenches (Table 1) for control of Pythium root rot on celery seedlings. Healthy, five- to six-week-old celery seedlings cultivar CR-1 were inoculated with the Pythium root rot pathogen immediately prior to transplanting into pots. Three different types of Pythium were mixed and used for this study. The degree of root rot was assessed using a scale of 1-5, where 1 equals healthy, no root rot; 2 equals lower leaves with yellowing; 3 equals 25-50 percent of leaves with yellowing and slight wilting; 4 equals greater than 50 percent of leaves with yellowing, stunting and wilting; and 5 equals plant death. The quantitative summary of disease intensity over time was determined as the area under the disease progress curve (AUDPC), so the higher the number, the greater the level of disease.

1 If labeled for celery and greenhouse use is NOT prohibited, the product can be used.

2 DM = Labeled for control of downy mildew on celery as a foliar spray.

Drench applications of Terrazole, the biopesticide Actinovate and V-10208 effectively limited the progress of root rot and disease when compared with the untreated diseased control and Subdue MAXX (Figure 1). Of the three fungicides that were effective, only Actinovate is registered for use on celery seedlings in the greenhouse. Actinovate is a biocontrol product and has shown good activity against Pythium root rot affecting other crops in MSU trials, so this positive result with celery follows that trend.

Figure 1. Quantitative summary of disease intensity over time (area under the disease progress curve or AUDPC) of celery seedlings inoculated with Pythium and treated with fungicides in the greenhouse.

This research was supported by GREEEN Project GR14-023 and Celery Research, Inc.

Dr. Hausbeck’s work is funded in part by MSU AgBioResearch.