Q&A about the strange world of cutworms this season

The season started out slow, but now all sorts of interesting insect questions are popping up, the most important being the situation with black cutworm.

Black cutworm infestations are widespread, but patchy, across the Lower Peninsula in corn. Fields literally next to each other can have very different infestations depending on weed pressure, trait and planting date. The cutworms we collected in southern and central Michigan were 1 to 1.5 inches and in the fifth to sixth instar. These caterpillars will continue to cut for perhaps two more weeks as they grow through a seventh instar.

Corn with the Vip3A trait is performing well against black cutworm. Corn with Cry1F Bt also looks good, although it isn't perfect. Under heavy insect pressure, some caterpillars may survive and bigger larvae are not killed by the Bt. Other universities report similar damage and Purdue also reported damage on Bt corn from other cutworm species. See the article “Cutworms Chewing Through Technology” in the Purdue newsletter.

If there are no weeds, why are there cutworms?

Ah, but there were weeds four to five weeks ago, when the moths laid eggs in the field. The excellent weed control forced the cutworms out of the weed mat and concentrated them on your tasty crop.

Scouting: Where do I look?

Use a trowel or knife to dig around the base of freshly wilted or cut plants. Larvae are generally within a couple inches of the base of the plant, and sometimes in the base itself. If 5 percent of plants are wilted or cut, and caterpillars are still under about 2 inches, consider spraying.

Which insecticide should I use?

I am not so concerned about product because there are many options. Pyrethroids provide a satisfying, quick death. Sevin can be used if a non-RUP insecticide is required. The key is to find which fields are infested and to spray before stand is lost. Length of residual isn't critical either, since you want caterpillars dead within the next 24 to 48 hours, not over the next two weeks.

What about the next generation?

Taller corn (5 leaf stage and beyond) can't be cut, so the next generation of black cutworm isn't a concern in corn.

What about replanting fields?

If you decide to replant a damaged field to corn or soybeans, treat if caterpillars are still numerous and less than 2 inches in length.

What can I do in the future? 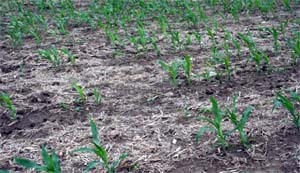 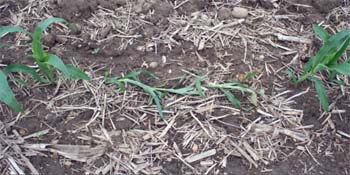 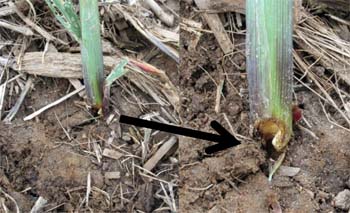 Close up of damaged plant, showing cut at base of stalk. 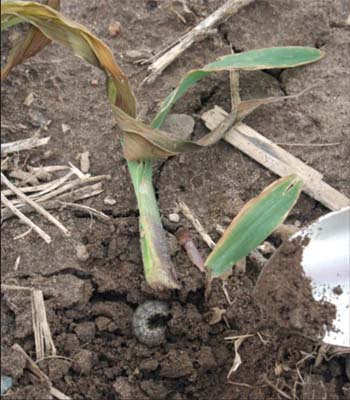 Location of cutworm – during the day, under a cut plant. Bring a trowel to scout. 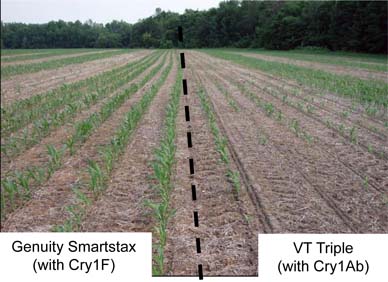 Field planted to 6-row alternating strips of Genuity Smartstax and VT triple. The Cry1F Bt in the Smartstax controlled BCW, while Cry1Ab in the VT3 had no impact. The VT3 strips were destroyed. 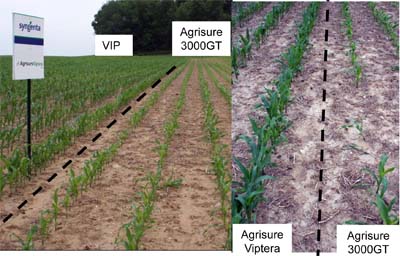 The Vip3A trait in the Viptera hybrid provided good BCW control while Cry1Ab in the 3000 GT hybrid had no impact. 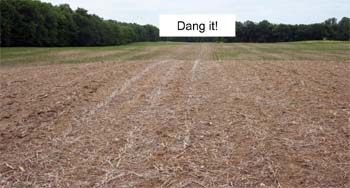