Why are leaves dropping from my maple trees? A close examination of leaves on the ground will likely show leaves with only a small portion of their stems (petiole). This leaf drop is caused by the feeding of maple petiole borers, Caulocampus acericaulis. Petiole borers are small insects called sawflies, which are non-stinging wasps.

The sawfly is only about 1/6 of an inch long and emerges from the soil in the spring to mate and lay eggs near the base of the petiole of maple leaves. Larvae enter the petiole where they tunnel through the stem of the leaf, feeding for 20 to 30 days. Eventually, the tunneling causes the stems to break and the leaves to fall to the ground in May to June. The larvae do not fall with the leaves, but remain in the portion of the petiole still attached to the tree. After 10 days, the portion of the petiole attached to the tree will fall to the ground with the borer. Larvae leave the petiole and burrow into the soil where they remain until the following spring when they emerge as adult sawflies. There is one generation of maple petiole borer each year. 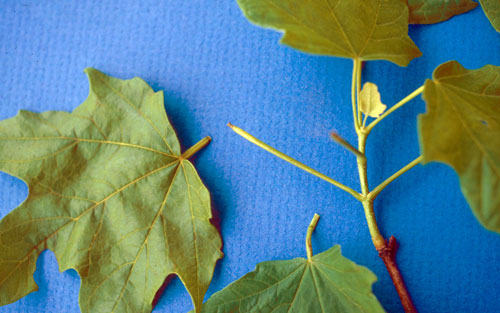 Though the falling leaves are a nuisance, it will not continue for very long and the proportion of leaves damaged by the borers is usually small and does not harm the plant’s health. Raking leaves up will not help reduce the borers since the larvae are not in leaves that have fallen to the ground. This is one of those moments when the best course of action is no action.

Mulching leaves back into the turf is the best method for disposing of the fallen leaves. Insecticides are not recommended since the problem is not significant to the plant’s health and incidences of this pest are infrequent and unpredictable. Once leaf drop is seen, it would be too late to manage the problem with pesticides.

Though all maples are susceptible to attack from the maple petiole borer, it is common to see leaf drop due to the insect on sugar, red and Norway maples.