Masked hunters are small assassin bugs (Reduviidae) that live indoors. They are of European origin and thought to have been introduced in the late 1800’s. What makes this assassin bug different than most others is that the nymphs camouflage themselves to avoid being detected by their prey and other predators. The nymphs are covered with microscopic hairs, which catch and hold dust, lint and other small particles of debris. This camouflage helps the nymph to ambush prey, hence the common name, "masked hunter."

If threatened or handled roughly, these insects will bite people with their needle-like mouthparts. Their bite is very painful and can result in localized swelling. Fortunately, they occur in very low numbers when found in homes.

Three people contacted me in the last month about a masked hunter they had found in their office or homes. Two thought they had discovered a Michigan population of conenoses, aka, kissing bugs. Conenose bugs, Triatoma spp., are large, blood-sucking assassin bugs that occur in the Southwest and transmit a disease known as Chagas disease. Conenoses are not known to occur in Michigan.

The masked hunter prefers dry habitats and therefore is usually found only indoors and other protected sites. This does not mean they are only found in the living area of the house, but it is possible they found their way in from attics and crawlspaces where their prey (other insects) may be plentiful. Control measures beyond that of a flyswatter are not needed unless they become numerous. If this occurs, efforts should be made to reduce the number of other insects the masked hunter is utilizing as prey.

Photo 1. Here are two photos of a masked hunter without its camouflage. The sizable beak is shown in the photo on the right. This one bit the photographer. Photo credit: Dana R. Evans, University of Michigan - Flint. 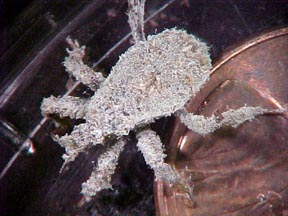 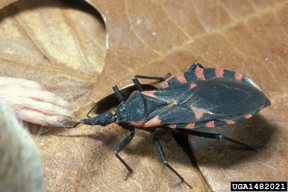