Mealybugs and leafroll virus in vineyards

Scout now to determine presence or absence of leafroll virus and its vector, mealybugs.

This 2014 summer, Michigan State University Extension staff have detected infestations of mealybugs in some southwest Michigan vineyards. Mealybugs are small, oval insects with a fuzzy, white covering, and they tend to occur in protected areas of the vine, especially under the loose bark. Some mealybugs can cause damage from their feeding and contamination of clusters, but others transmit viruses, making them much more of a concern.

About a decade ago, we experienced the grape mealybug becoming a pest in some vineyards when their numbers got so high that their sticky excretions led to black sooty mold developing on grape clusters before harvest. This was more of an issue in white juice grape varieties due to fruit quality concerns. However, this situation hasn’t been reported to us in many years, so it seems that biological control has regulated the grape mealybug populations.

Mealybugs are also able to transmit viruses, and we have now detected mealybug infestations across a region where there has also been detection of grape leafroll virus. Our insect samples from the 2014 collections are currently being identified to get a firm species identification, and the extent of the infestation is also being determined. Leafroll virus can infect all types of grapevines, but it reduces yields and fruit quality only in vinifera grapevines. 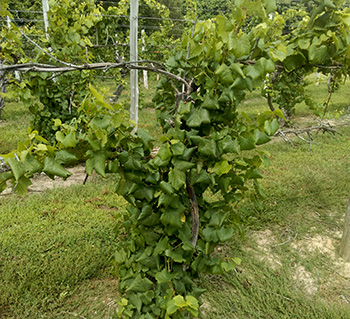 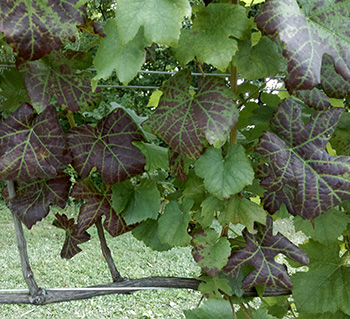 For winegrape growers, mealybugs and leafroll virus is a pest complex to be aware of and to be looking for in your own vineyards. Our scouting over the last few weeks has detected virus symptoms that are more distinct in recent years, perhaps due to the insect’s spread, but more likely due to the stress that vines have experienced over the past year. Virus symptoms are often more pronounced in these difficult growing seasons.

Vineyard managers, consultants and scouts can sample vines for mealybugs by examining the trunks of their vines under the bark and in the tight spaces within the trunks. We recommend that vineyard managers look for mealybugs as part of their vineyard scouting to determine the extent of this pest’s distribution. On mature vines, strip a section of bark and look underneath for white patches of fluffy material or the small white-pink insects. Adults are 2-3 millimeters long and the nymphs can be just 1 millimeter long. The mealybugs will move slowly once exposed to the light, and they also generally have ants associated with them. The ants are often the first thing you’ll see when removing the bark as they “farm” the mealybugs to get their sugary excretions. In some cases, controlling the mealybugs also requires controlling the ants. Mealybugs may also be found on the cordon area of the vine. It is also possible that they will move to clusters later in the summer.

Until we know what species of mealybug is present in these vineyards and how far it is distributed, the management approach will be somewhat generic based on experiences in other regions. These points are the most important to mention at this time:

These mealybug detections have been in Berrien County, and we are currently working to check additional vineyards before harvest. Our information presented here is based largely on experiences in other regions, and we will need to learn more about how to manage this pest in Michigan over the coming weeks and months. As that information is available, it will be provided to grape growers.

Drs. Isaacs and Schilder’s work is funded in part by MSU’s AgBioResearch.

MSU will host a virtual field day about viticulture in late July.