Different products can be used to facilitate melting ice sheets on putting greens.

When given lemons, make lemonade. When given an ice sheet, conduct an ice melt study. On Jan. 31, 2014, at the Michigan State University Hancock Turfgrass Research Center (HTRC), Michigan State University Extension specialists conducted an ice melting study in cooperation with Andrew Hollman, Brian Horgan and Sam Bauer from the University of Minnesota. We tested 20 products for their ability to melt ice. Conditions during our treatment window, which began at approximately 11 a.m. and concluded at 5:30 p.m., had temperatures hovering around 25 degrees Fahrenheit and constant cloud cover. The treatments can be broken down into three general categories: 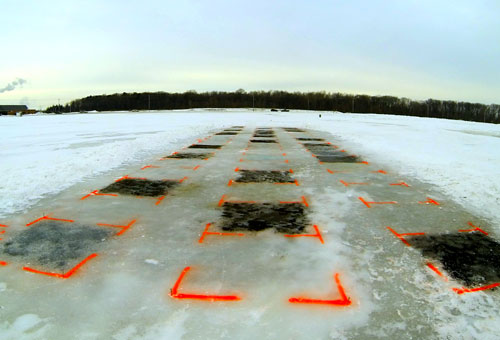 We recorded surface ice temperatures prior to treatment application and at intervals following applications using an infrared temperature sensor. We rated ice melt based on observation of standing water on the plots on a scale from 1-5 with 1 = no visible melt and 5 = visible standing water. 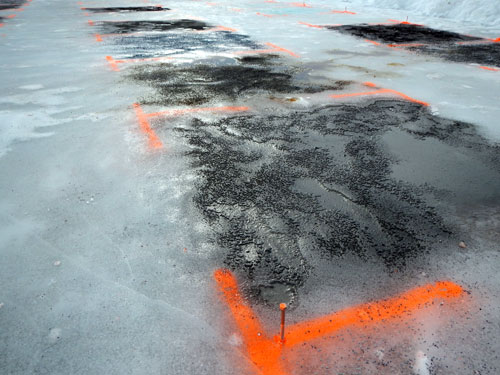 The standard salts were the only treatments we observed that were able to penetrate through the 2-inch ice sheet so they could be effective in facilitating gas exchange with the surface, but of course there is the risk of turf burning from the salt properties of these treatments. 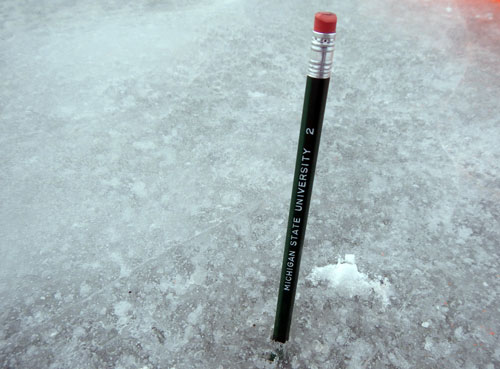 Overall, even though temperatures were below freezing and cloud cover persisted, the solar absorption treatments were effective at melting the ice surface, but were unable to melt to the surface given our 2-inch ice sheet. We are planning to replicate this trial again this coming week (as of Feb. 14, 2014) at both MSU and Minnesota when temperatures are forecast to be above freezing. We will also be assessing turfgrass phytotoxicity from the treatments this spring.

Next week, most areas of Michigan are forecast to have temperatures above freezing and possibly into the mid-40s in combination with rain. Many superintendents have been attempting to clear greens down to the ice layer to facilitate melting. Keep in mind that if this melt occurs there is going to be a tremendous amount of water that will be moving off greens.

Ensuring the water can exit the greens will be critical to try and prevent water backing up onto the green and refreezing if temperatures drop below freezing at night. Ultimately, Mother Nature is going to dictate whether or not our Poa annua putting greens have survived the ice sheet and the pending melting and freezing in the next month.