Michigan chestnut crop report for the week of June 6, 2022

According to MSU agricultural meteorologist, Jeff Andresen, there will be increasing clouds Wednesday with a chance of afternoon showers. Thursday will be partly sunny and pleasant across most of the state. There is a chance of precipitation on Friday. This weekend will be partly cloudy and cool with isolated showers possible. The greatest chance of precipitation next week will be across sections of southern Michigan. Temperatures will be in the high 60s to low 70s to round out this week and early next week will be warmer- 70s to low 80s. The NOAA 6-10 outlook predicts slightly below to near normal temperatures for most of Michigan and near normal precipitation through June 12.

Most growers apply granular fertilizers in spring. As a reminder, for nutrient management considerations, please reference the 2022 Michigan Chestnut Management Guide. Growers should be submitting soil samples each spring around the same time. Please refer to lab sampling and submission instructions prior to sending in samples. In addition to the MSU Soil and Plant Nutrient Lab there are many private labs that offer soil testing.

In recent years, some growers have also been utilizing tissue nutrient testing as another data point for making nutrient adjustments. Sampling chestnut leaf tissue for analysis is similar to protocol in other crops, with a few important caveats.

There are many labs that provide leaf analysis testing, a few are listed here for your convenience:

For more information on the general protocol for nutrient sampling, refer to the MSU Extension article, “Time to collect leaf samples for nutrient analysis.” 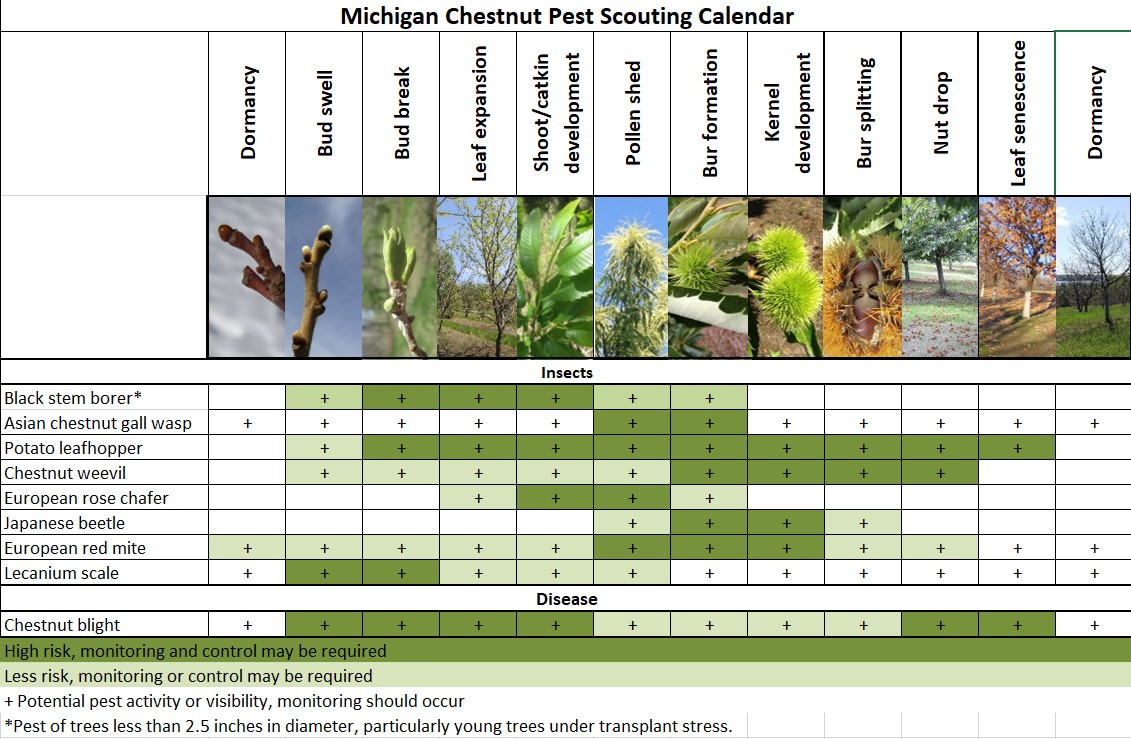 Lecanium scale activity may be noticeable at this time. Lecanium scale is a soft scale pest that attaches to and feeds on many deciduous plants in Michigan, most notably hardwood trees. Lecanium scale populations can build to extremely high levels over a series of favorable years before crashing due to natural enemies and disease. When present in low numbers, lecanium scale are often overlooked and are of little economic or aesthetic significance.

Growers need to check chestnut branches for evidence of this pest. Scales may look a lot like leaf scars or bud scales, so a close inspection is important. Some infestations have only a few scales per branch while others are well-covered. One tell-tale sign of scale activity is the shiny film of honeydew that the scales excrete onto surfaces beneath the scales. Increased ant activity is also associated with scale insects as they collect the honeydew.

The honeydew from scale can act as a substrate for sooty mold. On agricultural crops, sooty mold can become an issue when it ends up on the fruit or nut being produced. Additionally, the scales removes sap when feeding which can weaken shoots and even cause shoot death in some cases. The rule of thumb is that vigorous and healthy trees and plants can tolerate some scale infestation, but if high populations of Lecanium scale are found, control programs should be considered, particularly on small trees. Ideal control windows occur in early spring when buds are dormant and again in July when scale crawlers hatch. For more information on lecanium scale management, refer to the MSUE Article, Lecanium scale numbers building on chestnut.

Potato leafhopper (PLH) have been detected throughout the major chestnut production regions in Michigan. Like many plants, chestnuts are sensitive to the saliva of PLH which is injected by the insect while feeding. Damage to leaf tissue can cause reduced photosynthesis which can impact production and quality, and damage the tree. Most injury occurs on new tissue on shoot terminals with PLH feeding near the edges of the leaves using piercing-sucking mouthparts. Symptoms of feeding appear as whitish dots arranged in triangular shapes near the edges. Heavily damaged leaves are cupped with brown and yellowed edges and eventually drop from the tree. Severely infested shoots produce small, bunched leaves with reduced photosynthetic capacity.

Adult leafhoppers are pale to bright green and about 1/8 inch long. Adults are easily noticeable, jumping, flying or running when agitated. The nymphs (immature leafhoppers) are pale green and have no wings but are very similar in form to the adults. PLH move in all directions when disturbed, unlike some leafhoppers which have a distinct pattern of movement. The potato leafhopper can’t survive Michigan’s winter and survives in the Gulf States until adults migrate north in the spring on storm systems.

Scouting should be performed weekly as soon as leaf tissue is present to ensure early detection and prevent injury. More frequent spot checks should be done following rain storms which carry the first populations north. For every acre of orchard, select 5 trees to examine and inspect the leaves on 3 shoots per tree (a total of 15 shoots per acre). The easiest way to observe PLH is by flipping the shoots or leaves over and looking for adults and nymphs on the underside of leaves. Pay special attention to succulent new leaves on the terminals of branches. For more information on insecticides available for the treatment of potato leafhopper refer to the 2022 Michigan Chestnut Management Guide.

Rose chafers (RC) emergence typically begins around this time. RC are considered a generalist pest and affect many crops, particularly those found on or near sandy soils or grassy areas. The adult beetles feed heavily on foliage and blossom parts of numerous horticultural crops in Michigan and can cause significant damage to chestnut orchards. RC can be particularly damaging on young trees with limited leaf area. RC skeletonize the chestnut leaves but tend to consume larger pockets of tissue.

The rose chafer is a light tan beetle with a darker brown head and long legs and is about 12 mm long (Figure H). There is one generation per year. Adults emerge from the ground during late May or June and live for three to four weeks. Females lay groups of eggs just below the surface in grassy areas of sandy, well-drained soils. The larvae (grubs) spend the winter underground, move up in the soil to feed on grass roots and then pupate in the spring. A few weeks later, they emerge from the soil and disperse by flight. Male beetles are attracted to females and congregate on plants to mate and feed. For more information on insecticides available for the treatment of rose chafer refer to the 2022 Michigan Chestnut Management Guide.

Black stem borer adults are still active around the state with peak emergence in late May or early June. Black stem borer will infest and damage a wide variety of woody plant species, including chestnuts. Black stem borers are attracted to small trees with less than a 4-inch trunk diameter and stressed trees that produce ethanol. Female borers create tunnels in trunks to lay their eggs. These tunnels damage the tree’s ability to translocate water and nutrients.

Growers are encouraged to use a simple ethanol baited trap to monitor for activity, starting in mid-April. Traps are most effectively deployed near adjacent wooded areas at a height of 1.6 feet. Hand sanitizer is an easy and accessible bait but should be refreshed every few days.

Growers with small, vulnerable trees and positive trap catches or a history of damage will need to apply a trunk spray to prevent damage. The time to spray an insecticide for this pest is when females are flying in the spring before colonizing new trees. Young trees near the perimeter of orchards, especially near woodlots, are at greatest risk of injury. Because they are so tiny, it is difficult to monitor for adults to determine the optimum time to apply an insecticide, but a trap as described above can help time applications.

Pyrethroid insecticides applied as trunk sprays have shown the most promise in reducing the number of new infestations within a season. For a list of registered pyrethroids for use in Michigan chestnuts, refer to the Michigan Chestnut Management Guide.

Later in the season, remove and burn dead or dying trees. It is also important to make sure all large prunings and brush piles are either burned or chipped and composted as they may harbor overwintering adults and contribute to future infestations. For more information on black stem borer, refer to the Michigan State University Extension bulletin, “Managing Black Stem Borer in Michigan Tree Fruits.”

Spongy moth (Lymantria dispar), formerly gypsy moth, caterpillars are also being spotted around Michigan. In areas with previously heavy infestations, keep an eye out for this pest as it will feed on chestnut. In high enough numbers, they can completely defoliate trees, including chestnuts. Growers with vulnerable, young trees should be particularly vigilant in scouting for this pest. Small caterpillars are easily controlled with many insecticides, including Bt. Refer to the Michigan Chestnut Management Guide for more information on registered pesticides.

Existing chestnut blight infections (caused by Cryphonectria parasitica) can be observed at this time. There are no commercially available treatments for chestnut blight. Growers may prune out infected branches or cull whole trees as needed to limit disease pressure. Infested material should be burned or buried to further limit inoculum spread. To learn more about chestnut blight, visit the pest management section of the chestnut webpage.

For more information on chestnut production, visit www.chestnuts.msu.edu and sign up to receive our newsletter.

Also, join us for the 2022 MSU Chestnut Growers Chat Series. This series of interactive Zoom meetings will allow easy communication between producers and MSU faculty. These informal weekly sessions will include crop and pest updates from Rob Sirrine and Erin Lizotte. In addition, MSU faculty will drop in to address timely issues and provide research project updates. Bring your field notes too! We want to hear what’s going on in your orchard. These Wednesday sessions begin May 11 and run every other week through Aug. 31, 2022, from 1:30-2:30 p.m. EST. Registration is free but required. Register today!

All growers utilizing pesticide can benefit from getting their license, even if not legally required. Understanding pesticides and the associated regulations can help growers protect themselves, others, and the environment. Michigan Pesticide Applicator Licenses are administered by the Michigan Department of Agriculture and Rural Development. You can read all about the process by visiting the Pesticide FAQ webpage. Michigan State University offers a number of resources to assist people pursuing their license, including an online study/continuing ed course and study manuals. For more information on becoming licensed, contact Lisa Graves at 517-284-5653.

This work is supported by the Crop Protection and Pest Management Program [grant no 2021-70006-35450] from the USDA National Institute of Food and Agriculture. Any opinions, findings, conclusions, or recommendations expressed in this publication are those of the author(s) and do not necessarily reflect the view of the U.S. Department of Agriculture.