European red mites remain an issue around Michigan. Most growers are seeing relief from Japanese beetle populations as the adult stage wanes for the season. 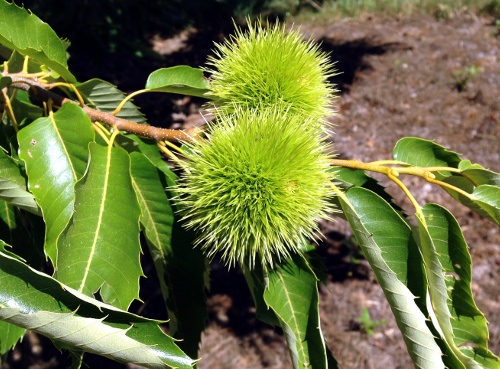 Potato leafhopper populations remain down overall, particularly on farms where insecticide applications have been made to control the pest. At this time of the season we are primarily finding damage and populations in vigorous succulent shoots. Like many plants, chestnuts are sensitive to the saliva of potato leafhopper that is injected by the insect while feeding on the underside of the leaf. Damage to leaf tissue can cause reduced photosynthesis which can impact production and quality, and damage the tree. Heavily damaged leaves are cupped with necrotic and chlorotic edges and eventually fall from the tree. Severely infested shoots produce small, bunched leaves with reduced photosynthetic capacity. 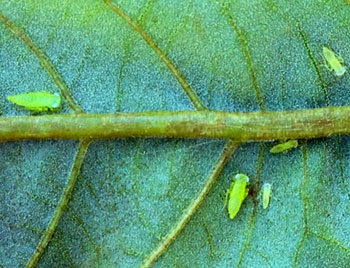 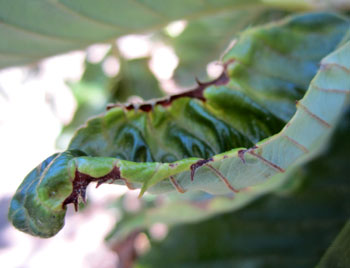 Adult Japanese beetle populations are ebbing for the season with less activity in southern Michigan. Adults continue to be reported in somewhat higher numbers as you head further north where they emerge later in the season due to slower temperature accumulation. Japanese beetle adults are considered a generalist pest and affect many crops found on or near grassy areas, particularly irrigated turf. Japanese beetle grubs feed on grass roots in early spring and again in the fall and can cause significant damage to turf. Larvae prefer moist soil conditions and do not survive prolonged periods of drought. 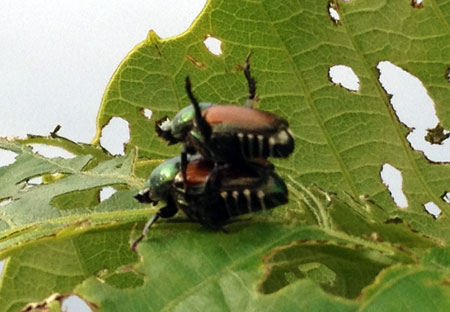 European red mites have reached high levels in some area orchards, even those treated with a miticide in the past weeks. European red mites overwinter in egg-form. Growers can locate egg masses in crevices, rough bark, crotches usually in folds of bark inclusion, on branches and in the bud scales with the aid of a hand lens. Summer eggs are found on the leaves along the veins on both sides of the leaf, but mainly on the underside. Eggs are orange-red and resemble turbans. Adults are often found on the upper leaf surfaces. Under favorable weather conditions (hot and dry), they can have eight or more generations in one season.