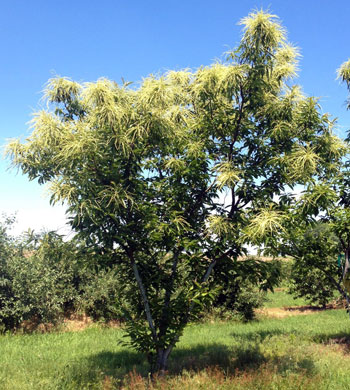 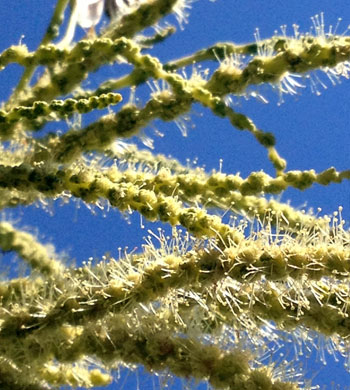 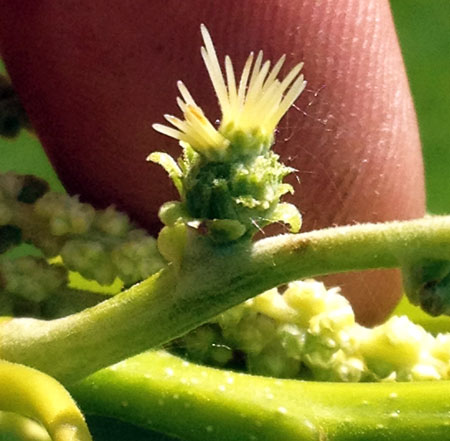 Potato leafhoppers were caught for the third week in a row, and nymphs have been observed. Like many plants, chestnuts are sensitive to the saliva of potato leafhoppers which is injected by the insect while feeding. Damage to leaf tissue can cause reduced photosynthesis which can impact production and quality, and damage the tree. Most injury occurs on new tissue on shoot terminals with potato leafhoppers feeding near the edges of the leaves using piercing-sucking mouthparts. Symptoms of feeding appear as whitish dots arranged in triangular shapes near the edges. Heavily damaged leaves are cupped with necrotic and chlorotic edges and eventually abscise from the tree. Severely infested shoots produce small, bunched leaves with reduced photosynthetic capacity.

The most common classes of insecticides recommended for control of potato leafhoppers include the pyrethroids, carbamates, neonicotinoids and organophosphates. See the additional Michigan State University Extension article, “Potato leafhopper management in chestnuts” for more information. Remember, even growers who believe they may have experienced crop losses due to the frost and freeze events this spring will still need to treat for potato leafhoppers to maintain tree health. 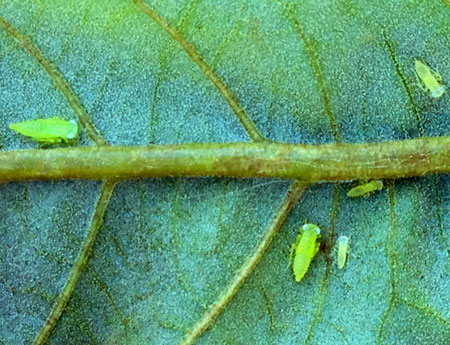 Wingless potato leafhopper nymphs on the back of a chestnut
leaf.  Photo credit: Mario Mandujano, MSU

Rose chafers are being reported around the state now. Rose chafers are considered a generalist pest and affect many crops, particularly those found on or near sandy soils or grassy areas. The adult beetles feed heavily on foliage and blossom parts of numerous horticultural crops in Michigan and can cause significant damage to chestnut orchards. Rose chafers can be particularly damaging on young trees with limited leaf area. Like Japanese beetles, rose chafers skeletonize the chestnut leaves, but tend to consume larger pockets of tissue with damage similar to caterpillar feeding than the fine, lace-like leaf that results from Japanese beetle feeding.

Rose chafers are light tan with a darker brown head and long legs and are about 12 millimeters long. There is one generation per year. Adults emerge from the ground during late May or June and live for three to four weeks. They are often found in mating pairs and fly during daylight hours. Visual observation while walking a transect is the best method for locating them. Because of their aggregating behavior, they tend to be found in larger groups and are typically relatively easy to spot. 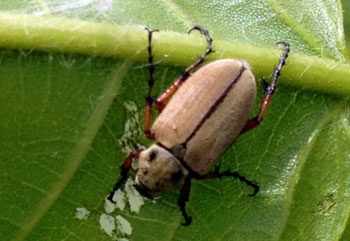 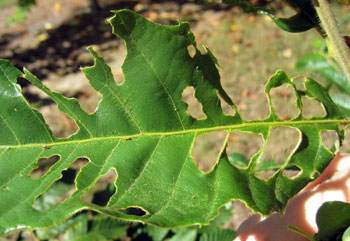 Dr. Fulbright’s work is funded in part by MSU‘s AgBioResearch.