Warmer days and rainfall over the past week caused significant leaf expansion in chestnuts, particularly further north along the Lake Michigan shoreline. Growers should be preparing for the arrival of potato leafhoppers this week.

The variability in weather over the past weeks has been noteworthy, even for Michigan. As chestnut development continues, the frost and freeze damage that occurred early in May is visible, particularly in lower terminals on trees located in west central and southern Michigan. Chestnuts in northwest Michigan were still in the early stages of bud break when the frost occurred and did not sustain substantial tissue damage, except for limited leaf distortion on Nevada which is difficult to locate as leaves have expanded. Chestnuts in southern Michigan have catkins emerging, an indication that female flowers will not be far behind.

As of May 31, 2013, the East Lansing Enviro-weather station has accumulated 450 GDD50 with 2.62 inches rain over the last week; Clarksville recorded 406 GDD50 and 2.31 inches rain; and the Northwest Michigan Horticultural Research Center accumulated 323 GDD50 with just under 0.75 inches of rain last week. 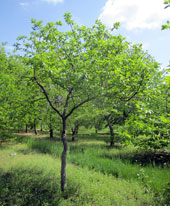 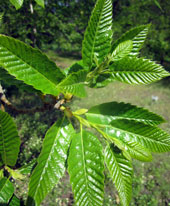 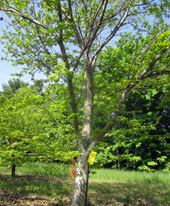 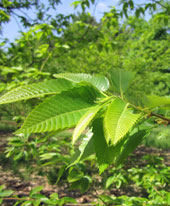 Left to right: Photos 1 and 2 show the development of the seedling propagated Chinese chestnut
versus photos 3 and 4 which show European/Japanese hybrid Colossal in northwest Michigan on
May 30, 2013. Photo 3 also contains a yellow sticky trap hung to monitor for potato leafhoppers.

No adult mites or eggs were visible during scouting in northwest this week, but reports from Michigan State University Extension personnel in the Clarksville, Mich., region indicate that adult activity is underway for European red mites and eggs are visible.

Growers should have hung yellow sticky traps in orchards to track the arrival of potato leafhoppers, which is likely imminent given the weather patterns in the forecast. Like many plants, chestnuts are sensitive to the saliva of potato leafhoppers which is injected by the insect while feeding. Damage to leaf tissue can cause reduced photosynthesis that can impact production and quality, and damage the tree. Most injury occurs on new tissue on shoot terminals with potato leafhoppers feeding near the edges of the leaves using piercing-sucking mouthparts.

Symptoms of feeding appear as whitish dots arranged in triangular shapes near the edges. Heavily damaged leaves are cupped with necrotic and chlorotic edges and eventually abscise from the tree. Severely infested shoots produce small, bunched leaves with reduced photosynthetic capacity. Adult leafhoppers are pale to bright green and about 1/8 inch long. Adults are easily noticeable, jumping, flying or running when agitated. The nymphs (immature leafhoppers) are pale green and have no wings, but are very similar in form to the adults.

Potato leafhoppers move in all directions when disturbed, unlike some leafhoppers that have a distinct pattern of movement. The potato leafhopper can’t survive Michigan’s winter and survives in the Gulf States until adults migrate north in the spring on storm systems.

Obliquebanded leafroller larvae roll leaves and create a tubular chamber where they remain except when feeding. Mature larvae are around 1 inch in length, have a flattened, black head capsule and yellowish-green bodies. Overwintering larvae, which we are observing now, often feed inside bud clusters; newly hatched larvae from the summer generation feed on leaves. The larvae currently present will pupate into the adult moths over the coming weeks. Adults emerge and mate, laying eggs for a second generation of larvae that typically peaks in July.

Pyrethroids- and spinosyn-based insecticides are the standard classes used to target the larval phase of this insect (refer to the chestnut pesticides table for more information on labeled products). Growers should not spray for obliquebanded leafrollers unless they have confirmed the presence of this pest at a damaging level.

To scout for obliquebanded leafrollers, walk through the orchard looking for distorted terminals with leaves that appear to not have expanded properly. Unroll the leaves to look for the larvae. Growers may also purchase pheromone lures for use in delta traps to capture adults. Trapping adults is a good indication of presence and potentially gives a sense of population levels, but because this insect overwinters as larvae, adults will be captured only after the initial damage from overwintering larvae is done, making the visual scouting important. Additionally, growers only trapping adults will miss the first larval treatment window which may be important if high populations occur. 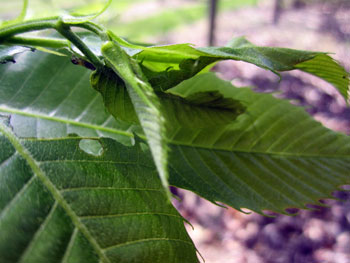 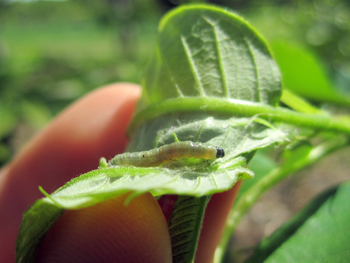 A number of beneficial insects including native pollinators and natural enemies were also observed this week. Hover flies were visible and can benefit growers in two ways. Larvae of many species eat aphids and other soft-bodied insects and the adult flies feed on nectar and pollen acting as native pollinators. Small, green assassin bugs that prey on aphids, leafhoppers, mites, caterpillars and other insects were also observed. Lastly, a number of parasitic wasp species were observed in plentiful numbers. 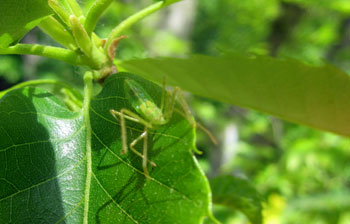