The preliminary USDA Agricultural Prices were recently released and the prices for September hay are lower nationally compared to September of last year (2012) and August of this year for alfalfa hay, other hay and all hay. These prices reflect survey results of farms in the respective states. Michigan reported a slight decrease from August and a slight increase from September of last year. The following table shows the results from the reporting North Central States. 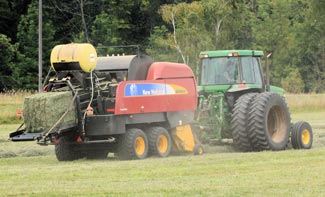 bales. Alfalfa grass mixed hay has continued to be under alfalfa hay in price. Grass hay prices with good quality have remained steady for most producers.

In the late summer, warm, dry weather gave producers a chance to make good quality hay and producers responded to harvest excellent quality fourth cutting. According to the Michigan Hay Sellers List sponsored by Michigan State University Extension, there is an ample supply of hay available in all categories. Buyers are encouraged to not wait to secure adequate supplies of hay for winter feed in hopes of finding a better price.

Getting the most from your single-cut hay system

Recommendations for selecting hay and pasture forages for Michigan