Growers are stringing yards in preparation for training. Disease pressure is high across the region.

Hop growth in established yards varies across Michigan. Depending upon cultivar and pruning method and timing, hops are anywhere from 6 inches in northern counties to over 4 feet in southern counties.

Weed control has been good this spring, pre-emergent herbicides and early glyphosate applications have been highly effective in established yards (baby hops should not be treated with glyphosate or pre-emergent herbicides). With all of the recent rainfall, growers will now have to focus on keeping grass under control, but will have to wait for broadleaf weed control until bines are safely up the coir.

Most of the hop production regions have received substantial rainfall totals over the last two weeks. Some hopyards in southern Michigan have received very heavy rainfalls, inhibiting field work. Most fields are currently stringing coir in preparation for training over the coming weeks. Some growers in southern Michigan have already trained certain varieties.

Growers who were unable to broadcast nitrogen early are concerned about fertigating yards with already saturated soils, making nitrogen application a challenge for some. A number of yards are transitioning production this year from Cascade to new varieties in the hopes of better demand and pricing, some growers are simply choosing not to string or train Cascade for the season.

With the wet and warm weather, disease control is a major concern and downy mildew-infected bines are visible. Growers that pruned early in early May are now seeing regrowth and beginning to apply fungicides for downy and powdery mildew management. Read more about pruning in the Michigan State University Extension article, “Pruning for disease and yield benefits,” and more about mildew management in the article Hop Disease Management in Michigan for 2018. 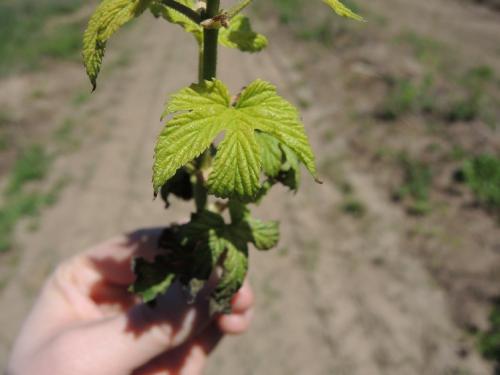 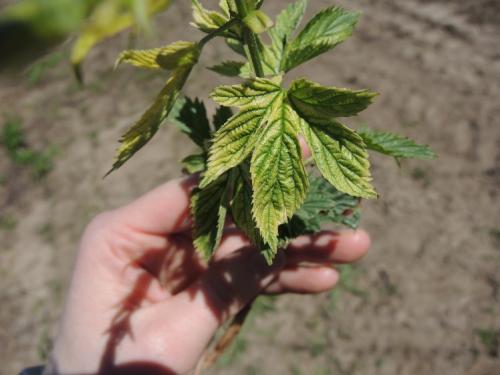 The long-range forecast is calling for warmer than normal temperatures over the coming weeks. As winds shift and originate from the southern states, start scouting intensively for potato leafhopper, which blow up on storm systems from the south. At this time, twospotted spider mites and damson hop aphid may also be present in the field.

Want to receive more pest management information for hop this season? Sign up to receive the MSU Hop News Digest or follow MSU Hops on Facebook.

This work is supported by the Crop Protection and Pest Management Program 2017-70006-27175 from the USDA National Institute of Food and Agriculture. Any opinions, findings, conclusions or recommendations expressed in this publication are those of the author(s) and do not necessarily reflect the view of the U.S. Department of Agriculture.