A recent outbreak of the pest within the state has prompted new legislation which will restrict the movement of hemlock products within Michigan in an effort to control this invasive pest.

Over the last several years, in reaction to the outbreak of hemlock wooly adelgid in forest stands across the eastern U.S., Michigan banned the shipment of hemlock trees and wood with bark into the state. However, a recent outbreak of the pest within the state has prompted new legislation which will restrict the movement of hemlock products within Michigan in an effort to control this invasive pest.

The exotic hemlock wooly adelgid insect was first identified in the eastern U.S. in early 1950s. It has systematically spread throughout the Appalachian region and is devastating the hemlock tree forest resource by the thousands. In an effort to help protect the estimated 170 million hemlock trees in Michigan, a ban or quarantine on bringing hemlock nursery stock and wood products with attached bark into the state has been in place for some time and was last revised in 2014.

In spite of the efforts to keep this destructive forest pest out of the state, an infestation has been identified in central West Michigan. First noticed in Muskegon County, closer inspection has identified colonies of the tiny sap feeding pest in neighboring Ottawa and in Allegan Counties as well. 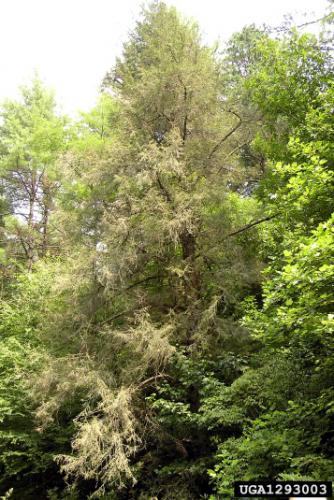 In an effort to control or slow this tree-killing pest, the Michigan Department of Agriculture & Rural Development (MDARD) solicited public comment on a proposed hemlock woolly adelgid interior quarantine. The original draft stated that “the proposed quarantine, movement of hemlock nursery stock, branches, boughs, uncomposted chips, logs and firewood would be regulated. Specifically, movement out of, or within, the three county area would be prohibited except under compliance agreement issued by MDARD. The proposed regulated area includes Allegan, Muskegon and Ottawa counties.” Other counties may be added as the need arises to further limit the spread of hemlock woolly adelgid.

If the quarantine is enacted, the movement of hemlock trees, boughs, firewood, logs or limbs will be prohibited without a compliance agreement. This restricted movement would include movement within these counties from site to site. (Note: A compliance agreement are actions jointly taken by both producers and the State of Michigan to ensure hemlock nursery stock and wood products are free of the adelgid insect.)

For more information on the hemlock wooly adelgid, Michigan State University Extension has a bulletin available. Extension Bulletin E-3300  details the life cycle and highlights the negative impacts from this invasive killer with some available treatment options should landowners identify adelgid colonies in their trees.

In addition, people interested in becoming actively involved in identifying new infestations of this and other potential forest pests are encouraged to become involved in the MSU Extension Eyes on the Forest program by becoming a sentinel tree volunteer.