Spotted wing Drosophila captures continue to rise as harvest winds down in some blueberry and raspberry sites.

Captures of spotted wing Drosophila (SWD) in our Michigan State University Extension statewide monitoring trap network have increased with the warmer weather this week. The proportion of traps catching this pest increased from 52 to 72 percent and the average number of SWD per trap also increased from 24 to 45 percent. This experience matches previous seasons where we have observed a sharp population increase as the days have started to get shorter and temperatures have become more moderate, although that has happened earlier this year than last.

The pattern across the state is of a greater increase in captures in the southwest part of the state than other regions. Average weekly catches are generally lower than five per trap in the northern region of the state, although there is some increase there in plantings of caneberries. West central region has some higher captures too, in cherry orchards and near a packing shed. However, as we have seen in recent weeks, the catches are highest in Berrien, Van Buren, Allegan and Ottawa counties. This is also a region where we have larger numbers of traps, and some of the crop fields in this region have completed harvest so the trap captures are climbing. Farms still being harvested and managed for this pest have much lower counts and have not seen such large spikes in the fly captures. 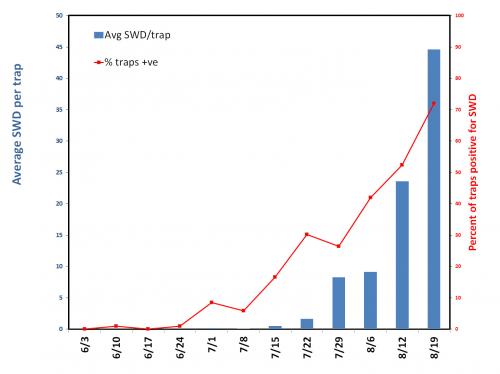 Sampling of fruit at some of the monitored sites that have not been managed this season continues to detect some Drosophila larvae in the salt test samples, with unsprayed raspberry and blueberry samples containing large numbers of larvae. Commercial farms have a range of situations, from no infestation where management programs are succeeding in keeping the fruit free of infestations, to situations where SWD infestations have been detected. Growers will need to have tight spray intervals and make sure they are achieving excellent coverage with the most highly ranked products for SWD control to continue successful management of this pest in the weeks to come.

For growers of later blueberry varieties, blackberries or fall red raspberries, it is essential that crop protection measures be taken if the fruit is still ripening and will be harvested later in August or September. Given the dense canopies, excellent coverage is essential for good control of SWD. For guidance on which treatments are effective, please refer to the management guides posted at the SWD website.