Spotted wing drosophila fly captures are increasing sharply at some sites. Some still have no catch, and first spotted wing Drosophila catch is reported in northwest Michigan.

Adult spotted wing drosophila (SWD) catch has increased in small fruit plantings in southwest Michigan over the past week. Five SWD were trapped in high-tunnel raspberries in southern Michigan, and eight males and six females were trapped outside of high tunnels (three traps) at one raspberry farm. A very low number of Drosophila larvae was also detected in fruit sampled from this farm with higher fly catches. In vineyards, we caught a single female SWD at a Concord, Mich., vineyard in Van Buren County and 20 SWD at multiple Berrien County vineyard sites. Another site in Berrien County caught 17 SWD in a site that grows raspberries and cherries, and four blueberry and strawberry sites trapped 14 SWD.

One scout is catching SWD in over half of the traps in blueberries in Ottawa County – 20 out of 34 traps are positive. Another scout, sampling mostly in Allegan County, has reported catching SWD in 13 of 16 traps in the network, and all these traps are catching as many or more SWD than last week. The three sites that had the sharpest increase in fly catch, up into double digits, were unsprayed blueberry fields being monitored in Allegan County. We also have traps deployed in a densely populated neighborhood in the middle of Grand Rapids, Mich. (Kent County), and caught a couple of SWD in each of those traps.

In Oceana County, we are catching an average of four female SWD per trap in tart cherry orchards. We have trapped our first fly in tart cherries in northwest Michigan at the Northwest Michigan Horticultural Research Center in Leelanau County during the past week. A private consultant also caught an adult fly in tart cherries on Old Mission Peninsula this week. Overall, we are catching 1.6 flies per trap and 30 percent of all the traps in the state are catching flies, which is an increase from last week’s average catch of 0.41 flies per trap and 16.5 percent positive traps.

The increasing frequency and abundance of SWD in southern Michigan monitoring indicates that growers with ripe and susceptible fruit should take precautions to prevent SWD infestation. As raspberry and blueberry harvest is underway throughout the state, Michigan State University Extension advises growers to be sure to keep this fruit protected through the harvest period. Growers should make their decisions to spray based on the presence of SWD flies and ripening or ripe fruit that are susceptible, plus the history of pest management inputs to each field. A monitoring program in these crops is recommended throughout the harvest season. From preliminary tests conducted at MSU, ripening and coloring sweet and tart cherry fruits are susceptible to SWD infestation. With tart cherry harvest underway in west central and northwest Michigan, it is likely that populations of SWD will not reach high levels before the end of harvest. 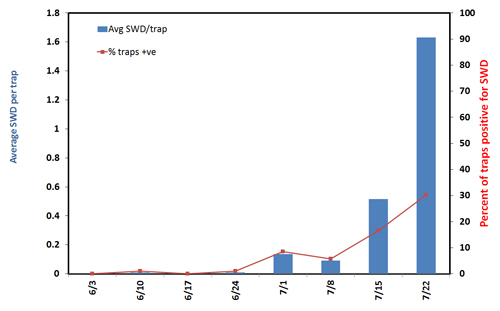