New spotted wing Drosophila detections have been made in Berrien, Allegan and Ottawa counties in southwest and west central Michigan.

Spotted wing drosophila (SWD) numbers have increased in southwest and west central Michigan this week. Three males were caught in blueberry traps at the edges of the blueberry fields, in woods at the edges of these fields, and within the interiors of these fields. We also caught five female SWD in the same trap locations in blueberries. One female was captured in a trap placed at the edge of a raspberry field. This week, we caught a total of four SWD in Allegan County, two in Ottawa County, and one in Berrien County. Overall, Michigan State University Extension is catching about 0.1 flies per trap and 10 percent of all the traps in the state are catching flies.

As raspberries and blueberries are ripening, growers need to be sure to keep this fruit protected through harvest. Growers should make their decisions to spray based on the presence of SWD flies and ripening or ripe fruit that are susceptible. Growers should maintain a monitoring program in these crops through harvest. For more information, see the recent MSU Extension article “Recent spotted wing Drosophila catches indicate ripening berries should be protected.”

A private consultant trapped a SWD in a tart cherry block in southwest Michigan. As sweet cherry harvest has begun in southwest, southeast and the Grand Rapids, Mich., area, growers should be monitoring these ripening fruits for the presence of SWD. Tart cherry harvest is predicted to begin later this week and into next week in the south, and these fields should be monitored for SWD. Cherries are on the list of fruits at high risk from SWD infestation. 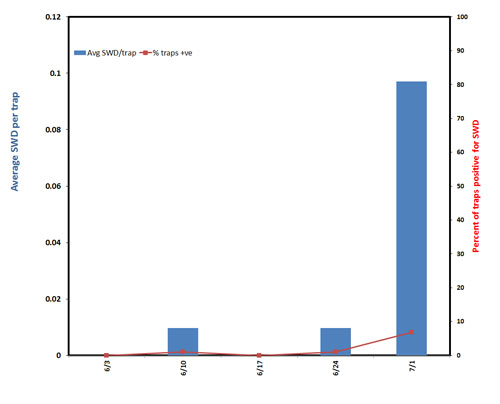