Two more spotted wing Drosophila were caught in southwest Michigan: one in raspberry high tunnels and a second adjacent to blueberries.

As mentioned last week, Michigan State University Extension has started a statewide monitoring program to help growers, crop consultants, scouts and others know when and where we are detecting spotted wing Drosophila (SWD) across Michigan. Traps have been deployed at fruit farms across the fruit growing regions of the state, and this report is a compilation of the information from those captures during the previous week. The report includes information on the counties where SWD have been trapped in the last week, the proportion of traps catching SWD, the average number of SWD per trap and guidance on management approaches. As the season develops, we plan to show the timing of first SWD captures and the trends in fly activity across the state.

Again this week, we caught very few SWD in Michigan. A female was caught in the raspberries in the high tunnels at the Southwest Michigan Research and Extension Center located in Berrien County. A second female was caught in Allegan County at the edge of a blueberry field. Likely due to the cool start to our spring, our early captures are a few weeks later than the 2012 first captures. 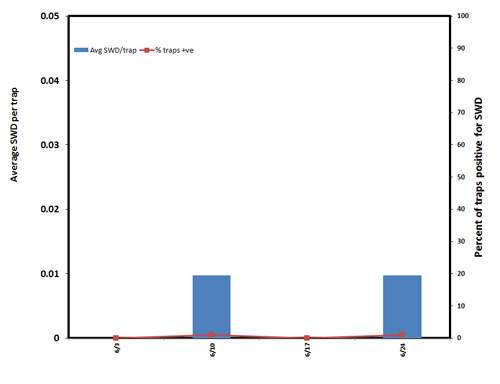